Red beacons off: Why the commoners will always be fooled

Oh! my poor gullible simple-minded country brethren, you know not when your intelligence is being abused. My dear fellow citizens do you not realise that the red beacon is nothing more than a red herring — noise without substance; sleight of hand; a clear attempt at misdirection?

Getting rid of the red beacon? God! (Or Cow!) What does it solve? What does it prove? When did one ever really have an inferiority complex because of the beacon rouge on top of another car? It were those attendant accoutrements to the red beacon that was always the problem.

The escort car in front with gun-toting camouflaged dangerous looking men who pointed menacingly at you to give way, the panic-stricken traffic police who rushed to block your path so that red beacon may pass, the city or state police, armed and walkie-talking, who pushed barricades on to your path, lest you chose to hinder the progress of the exalted beings. The free passage at toll booths, the special lanes at airports and railway stations and heaven knows where else. The breaking of queues; the fawning at any gathering or even non-gathering of a by chance encounter. Is any of that being given up? 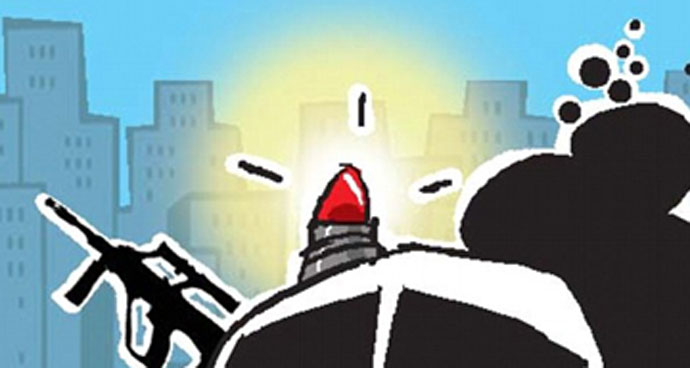 Everyone is now a VIP, hah!

My poor country bumpkins of citizenry, in the excellently descriptive words of PG Wodehouse, you have been had. What has been announced, with much fanfare and taken up with even more enthusiasm than say tackling the menace of driving on high beams across well-lit city streets or incessant honking to register impatience, is that the light on top of the car has gone out, but it has not diminished one iota the importance of the person being driven inside. Hubris needs not the flashing of the red light it needs, but the bending of knees and souls to ones misbegotten sense of exclusivity.

Ironically, this exclusivity is the only difference that is seamlessly capable of weathering the assault of the conformist brigades. You eat different, you pray different, you look different, so help you God (any or all 33 crores of them), you run the risk of being an anti-Indian.

But the VIP is not an anti-national, even though he or she chooses to act, live and flaunt the difference in the face of this vast non-VIP multitude that is India of the 21st century. Getting rid of the red beacon while keeping all the trappings of power intact seems like the beef-eater in India announcing on Twitter and broadcast across all news platforms that from May 1, I will not use onions for cooking the sacred meat.

Everyone is now a VIP, hah! Try blocking the path of a beacon-less big shot politician, government functionary or just have the guts to try and cut in front of a high-ranking police officer in his supposedly nondescriptive vehicle. You my dear will be promptly brought back to earth, in this case India.

The announcement said the PM too will henceforth travel in a vehicle sans the red light — so grow up Indians, since when did the red light flashing on top of a car signal that your Prime Minister is passing by. What about the sanitising of the route, the armed sentinels posted every X number of metres, the traffic stopped at all signals, corners, intersections?

Is it just the red light that makes a VIP? The logic is a perverse reversal of believing to be a Very Important Person because one is wearing underwear of the VIP brand. Wear any other brand and you are not a VIP — does that seem logical to you? No? Then why do you think that getting rid of the red beacon will make anybody less of a VIP and you more of one?

You and I are idiots and will remain so whether there be red lights atop cars or not, so stop singing paeans to the manipulators who feed on our collective national idiocy.