How India is looking to revive ties with Brazil

Bolsonaro’s visit marks both a re-affirmation and a consolidation of India-Brazil ties after the high point reached in the relationship under President Lula and the slowdown in momentum under his successor Dilma Roussef.

On January 26, 1950, the Constitution of India came into force and we celebrate this day as Republic Day. Our democracy, pluralism, respect for diversity, protection of fundamental rights, judicial independence, press freedom, right to dissent, minority rights, communal harmony and social upliftment, are all rooted in this Constitution. It is an occasion for us to showcase our democracy based on unity in diversity to our own people and the world as well.

We may be unique in having started the practice of inviting a foreign dignitary to be the chief guest at our national day celebrations. Some others have begun to emulate us now. It is a way of making a special gesture of friendship to countries that we consider close to us or those with whom we would want to forge deeper ties in mutual interest.

In a sense, this also reflects the openness with which we conduct our foreign policy. This tradition can also be diplomatically exacting. Every year, an exercise has to be done as to which leader could be most appropriately invited, and what external messaging would be the most pertinent in the light of our interests. The choice we make can be determined by the closeness of existing ties with the country in question, or it can be the potential of ties that we see in the future. Covering leaders from different continents is also a consideration.

This year, the President of Brazil, Jair Bolsonaro, is the chief guest. As it happens, five Latin American leaders have been invited to the R-Day celebrations in the past — one each from Argentina, Peru and Mexico, and two from Brazil, namely, President Fernando Henrique Cardoso in 1996 and President Luiz Inácio Lula da Silva in 2004. President Bolsonaro is the third Brazilian President to be invited, which shows that Brazil has been given privileged attention by us all these years as Latin America’s biggest (and the world’s fifth largest) and most populous country. Brazil is multi-cultural and ethnically diverse, with a unique environmental heritage, great agricultural riches, natural resources and considerable industrial strength. 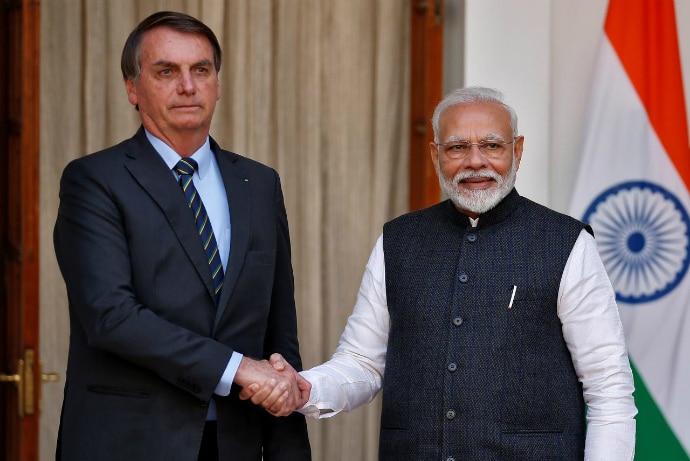 Bolsonaro may have seemed an unlikely choice as chief guest for R-Day 2020 given his reputation of being an advocate of far-Right policies, of having contempt for multilateralism and being an open admirer of US President Donald Trump. (Photo: Reuters)

Bolsonaro’s visit marks both a re-affirmation and a consolidation of India-Brazil ties after the high point reached in the relationship under President Lula and the slowdown in momentum under his successor Dilma Roussef. Under Lula, Brazil expanded the scope of its foreign policy by paying much more attention to the developing world in Asia and Africa, and generally raising its diplomatic profile on the international stage.

A commitment to South-South cooperation was reflected in the launch of the India-Brazil-South Africa (IBSA) forum that had the aim of developing deeper political, economic and defence ties between the three countries, and building direct connectivity between them to facilitate this.

IBSA, however, did not deliver on its promise. As it transpired, IBSA was eclipsed by the Brazil-Russia-India-China (BRIC) forum and, subsequently, by Brazil-Russia- India-China-South Africa (BRICS). At the Russian initiative, the BRIC forum emerged as a dialogue platform for non-Western countries to express their views on global governance, respect for sovereignty and non-interference in the internal affairs of countries, eschewing double standards on human rights issues and terrorism, reform of international political and financial institutions such as the UN and IMF to give more representation to developing countries, multi-polarity, and so on.

With the inclusion of South Africa, the geographic scope of BRICS widened to include virtually all the continents. India and Brazil have had the additional shared agenda of seeking permanent membership of the UN Security Council. Since 2006, India and Brazil are strategic partners.

Bolsonaro may have seemed an unlikely choice as chief guest for R-Day 2020 given his reputation of being an advocate of far-Right policies, of being homophobic and misogynistic, an opponent of environmental regulations, affirmative action and secularism, of having contempt for multilateralism and being an open admirer of US President Donald Trump.

During his election campaign, he accused China of “buying Brazil”. His ascendancy to power raised the question of his commitment to BRICS. Yet, in November 2019, he hosted a successful BRICS summit. Pressed by Brazil’s mining, beef and agricultural lobbies he has sought to mend fences with China. He agreed with PM Narendra Modi during their meeting to comprehensively boost the strategic partnership between the two countries, with a focus on trade (currently at $8 billion), investment from Brazil in India in the areas of agricultural equipment, animal husbandry, post-harvest technologies and biofuels in the context of climate change, as well as space and defence sectors. It is during the BRICS Summit that Modi invited Bolsonaro to the 2020 Republic Day.

Bolsonaro’s visit, apart from pragmatically seeking to move the relationship forward, also signifies a decision to give more attention to our relations with Latin America as a whole, a region with much untapped potential for two-way trade and investment.