In Jayalalithaa's constituency, parties are allegedly offering cash for votes.

The colourful houses, white rangolis, blue windows and women stringing jasmine flowers brought a smile to my lips. RK Nagar has a unique beauty. As a person, who speaks broken Tamil and is a clear misfit in the region, I was overwhelmed with the warmth I received.

The women in the locality were really helpful. They took me into their house and gave me water, tea and Parle-G biscuits and patiently answered all my questions which revolved around one thing solely - the upcoming RK Nagar by-polls.

Who will get the chance to take Jayalalithaa's legacy forward? Will it be E Madhusudhanan or TTV Dhinakaran? The two-leaves or the pressure cooker, which symbol will be more powerful this December? Was the battle for the AIADMK symbol before the Election Commission even worth it? These are among the questions people in Tamil Nadu are asking. 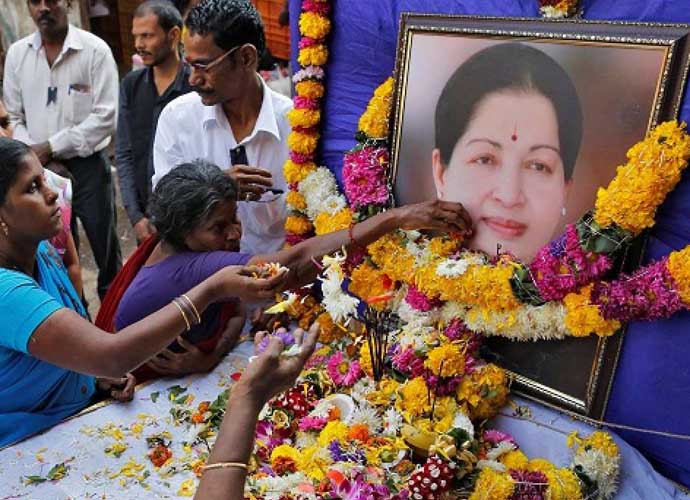 While TTV Dhinakaran and Madhusudanan fight over Amma's legacy, what exactly does the RK Nagar by-poll offer the voters? I went to many houses and chatted with the people I met. All of them said the by-poll for them was a chance to make "money".

Women in the constituency are very excited about the upcoming by-polls. In April 2017, a lot of money was pumped into RK Nagar by parties with an intention to buy votes. Voters got Rs 7,000 each from across political parties. Interestingly, despite taking the money people didn't really vote for any party as the polls were cancelled over reports of cash for votes.

Months down the line, people in RK Nagar are waiting for candidates to start doling out money for votes.

Saraswati, a voter in the constituency, said: "Last time, we had money to celebrate Diwali and this time it will come just in time for Pongal. The people here accept money from all parties and then vote according to their choice. How will the party find out?"

This is the truth of RK Nagar. People look forward to getting money from candidates happily and if the by-polls are cancelled this time again they will be happier because should a third poll come along, they stand to get more money. The Election Commission is, however, maintaining extra vigil. Complaints have already been made to the returning officers that parties have started pumping cash into RK Nagar. The BJP in Tamil Nadu also staged a protest over the issue. Seven observers have taken charge in the constituency and police check-posts have been put up at strategic points to ensure vehicles carrying illegal cash are intercepted.

But the people of RK Nagar reveal that the announcements for money have already reached them. "Last time it was around Rs 4,000 for a TTV vote, Rs 2,000 for a DMK vote and Rs 1,000 for an OPS vote. Now the value will only increase," said Ganesh, a young voter.

All parties admit that cash is being offered in exchange for votes, but denied being involved in the practice. All parties are blaming each other for it. It seems that in this political battle being fought with cash, voters of RK Nagar have the last laugh.

Also read: Why videos of rape, lynching and hackings are on the rise in India

#AIADMK, #RK Nagar by-polls, #Jayalaithaa, #Cash for votes
The views and opinions expressed in this article are those of the authors and do not necessarily reflect the official policy or position of DailyO.in or the India Today Group. The writers are solely responsible for any claims arising out of the contents of this article.