Robert Vadra has become a punching bag for BJP

Is it a procedure under Modi government to leak sarkari documents to the media to tarnish reputations?

There was a time when Ram Mandir was the central theme of BJP's politics. Before an election it would invoke the name of Ram, promise Ram Mandir in Ayodhya and try to muster political gains. For the last few years, Ram as the BJP's central theme has been replaced by "Target Robert Vadra" and the party which hasn't really come through on its Mandir promise, now has a new political jumla to offer.

Just as we see the BJP on the backfoot on the Narendra Modi government's dismal two-year report card, on a series of controversies and its poor show in four out of the five Assembly elections (barring Assam) held this year, out comes another allegation against Vadra to divert attention from pressing problems that beset the nation.

As my friend and senior lawyer Sanjay Hegde masterfully articulates, BJP's new "hit-and-run" strategy bears an uncanny resemblance to Arvind Kejriwal's - the attempt is to throw some mud and hope it sticks. If it doesn't, it at the very least leaves one with a dirty face.

This is exactly what the BJP did when it made loud claims about alleged illegal land dealings by Vadra in Haryana and Rajasthan two years ago. Ravi Shankar Prasad said it was a "text book case of corruption" back then. The fact of the matter is that two years down the line, there is not a single piece of evidence to back any of those rather defamatory claims made against Vadra.

Also read: Why Priyanka will be a bigger failure than Rahul Gandhi

The BJP has been in power in Rajasthan, Haryana and the Centre. In Rajasthan, the police gave a report that Vadra was a "victim of fraud" perpetrated during Vasundhara Raje's earlier regime. In Haryana, the one man inquiry commission has not proceeded much except for chief minister Manohar Lal Khattar's pre-mature announcement that it would send Vadra to jail.

Can such an inquiry be considered fair and impartial anymore? Why not have a proper court-monitored inquiry which cannot be manipulated? Finally, there have been no less than four PILs filed in the land deals case, each of them dismissed by various high courts and the Supreme Court which said that Vadra should not be targeted merely because he happened to be related to a political family.

When the matter was taken to the Delhi High Court, it asked the Central Bureau of Investigation (CBI) under the Modi government for a response on the allegations and the CBI at that point of time said there was no prima facie case. 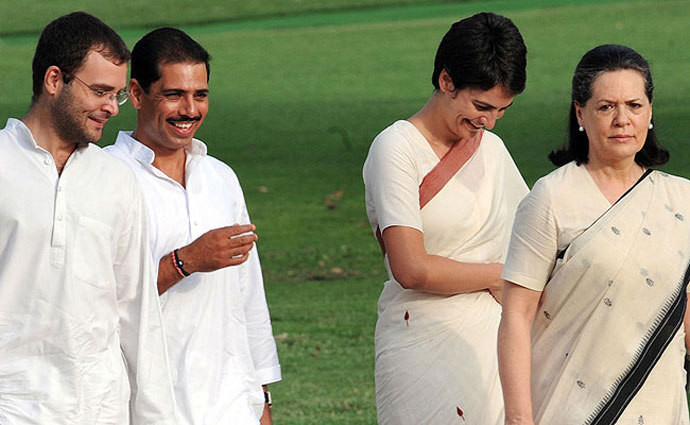 BJP believes that a "Gandhi-mukt Congress" alone can lead to "Congress-mukt Bharat".

Now a new set of allegations are being made all over again. But no evidence is being provided to back it up. Look at the sequence of events. There are allegedly some preliminary reports of investigation by the income tax and other departments which cite a link between an alleged arms dealer Sanjay Bhandari and Robert Vadra.

None of us have seen this report. We only know it exists through planted media reports and rumours. Anyhow, if at all there was any substantial case in those allegations, should the concerned departments not have issued notices to Vadra?

Also read: A to Z of Sonia Gandhi's controversies

This is not a pro-Congress government that it would be cautious in tying the legal noose. What is it waiting for? Or is it a procedure under the Modi government to leak sarkari and investigative documents to the media to tarnish reputations without offering the other party a fair chance to rebut the allegations?

Vadra is now being alleged to own a house in London on a benami title. But the reports don't mention who that benami person is or what is his link with Vadra. Media reports say there have been email exchanges between Bhandari and some associate of his. And some emails from an unverified account that is alleged to be Vadra's email.

These are just wild, reckless allegations and every word of it has been denied by Vadra's legal team vehemently. They have gone on record to state that he "does not own directly or indirectly, any house described by you as No 12, Ellerton House, Bryanston Square, London" and that Vadra and his assistant "have not entered into any transaction of a financial nature with Mr Sanjay Bhandari and are not even aware that Mr Sanjay Bhandari is involved in any defence transaction".

The larger question is that if solid evidence exists why not take it up according to due legal procedure? Why indulge in this hit and run which two years down the line amounts to nothing but empty allegations that destroy reputations of individuals?

The reason is simple and deeply political. Elections in Uttar Pradesh are coming up in 2017 and it is crucial for Modi to do well in those elections if he is to continue as prime minister after the 2019 general elections. Recent media reports of Priyanka Gandhi Vadra taking the lead role in Uttar Pradesh are causing great discomfort in the BJP camp.

Nobody knows if Priyanka will join politics actively but the strategy of the BJP is to damage the name of her husband and her family as much as possible. It is also part of the larger game plan that "Gandhi-mukt Congress" alone can lead to "Congress-mukt Bharat".

Hence, the vilification and vendetta campaign against the Gandhis. And if Vadra is to be targeted too, then drag in the Congress leadership, including Sonia and Rahul Gandhi. Thast's the BJP's line of thinking. Why then must the BJP and media complain if the Congress busts the lies being spread about Vadra and the party leadership?

The BJP on its part says it is targeting corruption and not Vadra per se. If that is the case, what action has the BJP taken on Vyapam-Shivraj Chouhan or Lalitgate-tainted Sushma Swaraj and Vasundhara Raje?

Finally, if the media is indeed objective on this case, just like they gave earth shattering coverage to a flimsy letter by Kirit Somaiya, aka Subramanian Swamy part two, who hasn't been able to justify the last set of allegations in the AgustaWestland chopper scam, made against Rahul Gandhi's aide Kanishka Singh until now, they should also give equal importance to the links between Bhandari and BJP leader Sidharth Nath Singh who has on record accepted those links to be true.

Recently, a media report has quoted that documents clearly show that Bhandari was in contact with senior BJP leaders. Call data records of Bhandari show that he was in contact with Siddharth Nath Singh, who had made over 450 calls to Bhandari "within a short span of time". Even finance ministry officials have admitted this to be true.

Siddharth Nath Singh confesses, "I have known him as a family friend for several years and even attended his daughter's wedding."

Bhandari is being probed by CBI after the Directorate of Revenue Intelligence red-flagged him as the kingpin of a scandal where Bhandari was importing cars by avoiding custom duty. Documents recovered during raids on him have thrown up the details of the defence dealer’s properties in the UAE, London and the Panama Islands.

Should the media not pursue with greater vigour what kind of links a leading ruling party member had with Bhandari? What was the nature of their relationship? Has the media asked these questions of Siddharth Nath Singh? Have the agencies probed it fairly or have they given him a clean chit because he is a BJP leader?

Should the court not monitor this badly politicised, hit-and-run operation being carried out in the media with the active connivance of the top members of this Modi government, to arrive at the real truth? Should there not be an end to this campaign of innuendoes and insinuations against Vadra and should we not, once and for all, get the BJP to put its money where it's mouth is?

#Congress, #Narendra Modi, #BJP, #Robert Vadra
The views and opinions expressed in this article are those of the authors and do not necessarily reflect the official policy or position of DailyO.in or the India Today Group. The writers are solely responsible for any claims arising out of the contents of this article.