As 2017 ends, Rohingya crisis is far from over

UN special rapporteur has called for pressure on China, Russia over abuses on Rohingyas in Myanmar.

In a significant statement issued recently on the ongoing Rohingya crisis, UN special rapporteur Yanghee Lee singled out Russia and China for their alleged failure to prevail upon Myanmar to stop the military crackdown on the Rohingyas. These two countries also came under scathing attack for restraint in criticising Myanmar for thee unending human rights abuses inflicted upon the Rohingyas.

Earlier, in a what appeared to be a belligerent move, Russia had warned many countries against interference in the internal affairs of Myanmar. It is, therefore, clear that China and Russia, two major powers, have their tacit endorsement and carte blanche support to Myanmar's military actions and alleged atrocities perpetrated upon the Rohingyas. It is equally pertinent to state that since 2007, China, backed by Russia, has sabotaged several efforts taken by the Security Council on Myanmar with the veto power.

Also, China's unstinted support helped Myanmar military generals going above the law for decades. This impunity gave them the licence to carry out the killings. It's now perhaps time for China to reassess its strategy so that in future it is not branded as a collaborator to the genocide in Myanmar. Here, if China supports a UN move to refer the Myanmar situation to the International Criminal Court, there will be no dearth of evidence to prosecute the alleged offenders. 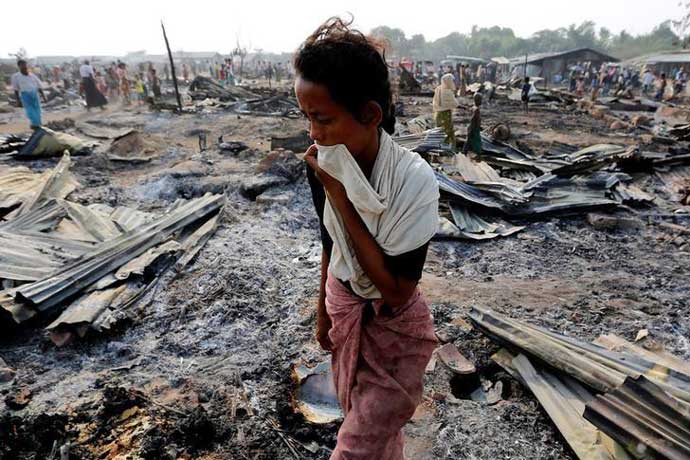 Meanwhile, experts assess, and with cautious pessimism, that Myanmar should not become another Rwanda or Bosnia. Internationally acclaimed jurists, justice Patricia Wald of the US, justice Richard Goldstone of South Africa and Sir Geoffrey Nice of the UK looked worried in the wake of resurfacing of a report called "Crimes in Burma" which was prepared in 2009 by the Law School of the Harvard University. While examining the report, the experts state that UN documents have included a range of human rights violations in Myanmar since long.

The international human rights clinic of the Harvard Law School prepared the report factoring four types of crimes perpetrated in Myanmar: forced displacement of the population, sexual violence, murder and torture and such crimes had been duly reflected at regular intervals from 2014 incorporating abuses upon other ethnic groups specially in Kachin and northern Shan states. The report further added that fleeing villagers destroyed houses, crops and planted land mines in civilian areas.

Subsequently, taking the cue from the Harvard report, in the following year, in a legally analytical report, the Law School of the Yale University documented atrocities unleashed by the Myanmar military against the Rohingyas. It particularly highlighted the excesses of the alleged Buddhist monks' onslaught upon the Rohingya Muslims. The UN investigation team which wanted to go to Myanmar on a fact-finding mission, following the reports of these atrocities, were denied entry. They described the atrocities as "text book example of ethnic cleansing".

As seen from the above elucidation of the Rohingya issue so aptly internationalised by the West, the entire focus of the academia is on the Rohingya-linked developments and it's giving a handle to the US and allies to come down heavily on powers like China and Russia. This looks nothing but sheer politics.

In the meantime, in a disturbing development, Thai intelligence services had started seeing use of Rohingya refugees (now at a monstrous figure reaching 6,40,000 in various Bangladeshi camps) by jihadists. They allege that they are being misused by Islamic insurgents operating in the country's southern provinces. Needless to emphasise that southern Thailand provinces, including Narathiwat, Pattani, Suratthani and other areas bordering Malaysia, are gripped with radical Islam and the areas often erupt with terror incidents. Although no evidence at hand yet, it will not be surprising if with Zakir Naik's present stay in Malaysia, these areas will get a boost to foment radicalism and terror.

Mae Sot, in the meantime, on the Thai Myanmarese border, remains the hub of hosting training camps for insurgents of all kind. A prominent Indian journalist and a security expert, recently reported that Khalistan terrorists and Lashkar linked terrorists came to notice undergoing a training course in facilitating improvised explosive devices.

Further, very recently Rohingya jihadists from the Harakah Al Yakin were noticed with crates of AK 47 rifles. In this context it is worth mentioning that Arakan Rohingya Salvation Army (ARSA) had surfaced being trained by Pakistan's ISI as well as Bangladesh Jamaat Ul Mujahideen (JMB) raising security concerns in the region leading to a spurt in radicalisation and ultimate terrorism.

On one hand, we see the reports generating from western quarters on atrocities on Rohingyas which are purely of academic interest, and on the other, a segment of the Rohingyas being armed to teeth, indoctrinated and trained by the undesirable quarters, which in all likelihood, will help abet further growth of radical Islam and eventually terror. This looks plausible as the actors involved in the blue print are against any kind of peace in the region. The affected areas will not be confined to Myanmar alone. Bangladesh and southern Thailand may get the heat too.

Bangladesh is a tinderbox with a humongous number of Rohingyas under its belt. All Rohingyas are not ultras and all Bangladeshis are not radicalised, but a small number may wreak havoc. Twenty-seven-year-old Akayed Ullah, a Bangladeshi who had come to the US only seven years ago, was so throughly brain-washed by the radicals in Bangladesh that he detonated the pipe bomb in New York City barely a fortnight ago. There are thousands of Akayeds the world over, radicalised and committed. How do the authorities neutralise them?

Advent of 2018 will be fraught with multiple security challenges.

#China, #Russia, #Myanmar, #Rohingyas
The views and opinions expressed in this article are those of the authors and do not necessarily reflect the official policy or position of DailyO.in or the India Today Group. The writers are solely responsible for any claims arising out of the contents of this article.