Why Bangladesh took in the Rohingya Muslims

PM Sheikh Hasina and the common people have shown uncommon courage and humanity.

As hundreds of thousands of Rohingya Muslims are fleeing religious persecution in neighbouring Myanmar, it’s the Bangladesh government, along with the common people's support, that has come to the rescue of the Myanmarese nationals and shown them that humanity is still alive. The forced exodus of Rohingyas has fuelled a major migration crisis in the entire region.

The horrifying memories of struggle for Bangladesh's independence are still fresh in the minds of the people of this nation. So when the Rohingyas arrived looking for shelter, Bangladeshis stood by their side. It's heart-warming to see how aid groups from different countries, including India, have come to Bangladesh to help the Rohingyas.

Bangladesh Prime Minister Sheikh Hasina has already visited refugee camps and condemned the cold-hearted treatment by the Myanmar military had has led to a crisis of such immense proportions. While demanding that Myanmar must "take steps to take their nationals back", Hasina also has assured temporary aid until that happens.

It breaks one's heart to see countless children, women and innocent civilians, who have got nothing to do with militancy, being exposed to such extreme violence.

PM Hasina has also taken up the issue in the UN General Assembly recently. She has proposed to create "UN-supervised safe zones inside Myanmar to protect Rohingya Muslims fleeing a military crackdown to seek refuge in Bangaldesh".

"These people must be able to return to their homeland in safety, security and dignity," Hasina told the UN General Assembly.

PM Hasina has been courageous enough to announce that if she can "feed 160 million people of the country, she can also take care of another 500,000-600,000 more people who have entered the Bangladeshi side".

According to the United Nations, more than 4,20,000 Rohingyas have fled to Bangladesh to escape the military operations after the August 25 attack (carried out by Rohingya militants) on 30 different police posts in Myanmar. The violent army campaign in northern Rakhine state reportedly includes rape and burning of villages.

The agencies providing humanitarian aid to Rohingyas in Bangladesh are struggling to meet the massive need for shelter, health, sanitation and food.

The Rohingyas are one of the most persecuted minorities in the world. It's sad how pro-democracy leader Aung San Suu Kyi, who is the de facto leader of Myanmar, has not said anything against the military operations led by the Tatmadaw (Myanmar Army). The agencies providing humanitarian aid to Rohingyas in Bangladesh are struggling to meet the massive need for shelter, health, sanitation and food.

The Rohingya population - 1.1 million people out of the total population of 52 million in Myanmar, according to the 2014 Census - have been facing persecution for decades now which has effectively made them a stateless people. They have been deprived of education, health services, employment. They are not even free to move within Myanmar. The Arakan Rohingya Salvation Army (ARSA) claimed that they attacked the Myanmar military and police to protest the inhuman treatment of the Rohingya community.

Suu Kyi is unquestionably the leader of the people of Myanmar, but she doesn't have much say because of a 2008 Constitution which created military supremacy in the country. After becoming the state counsellor of Myanmar, Suu Kyi’s main objective was to "bring peace all over her country". But it's clearly visible that she has failed miserably to attain her goal.

Rakhine State is Myanmar's least developed state. As a result of minimal access to basic needs like food and healthcare, it has a poverty rate of 78 per cent, whereas the national average is 37.5 per cent. It exposes the deep cleavage between the majority Buddhists and minority Muslim Rohingyas.

Tension between the two communities has reached an all-time high following the recent developments. The October 2016 attack on border posts in Rakhine state by the militants  of Arakan Rohingya Salvation Army and a subsequent military crackdown had forced more than 80,000 Rohingyas to flee to Bangladesh. 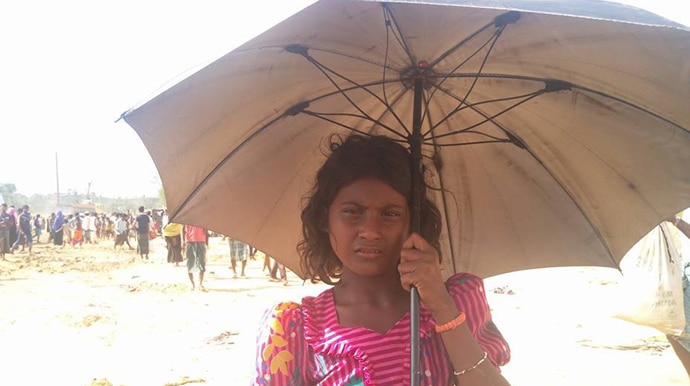 About 1,400 children have reportedly fled Myanmar and entered Bangladesh without anyone accompanying them.

The August 25 attack on police posts by the ARSA in Rakhine state has seen a more ruthless crackdown by the Myanmar army.

It seems there is no permanent solution to these kind of situations all over the world. Syria, Afghanistan, Yemen, South Sudan, North Korea, Venezuela and many other places are already facing so much turmoil and insufferable human consequences. The recent world history is full of migrant misery - horrifying experiences of civilians with countless children and women being the worst victims. About 1,400 children have reportedly fled Myanmar and entered Bangladesh without anyone accompanying them. About 60 per cent of the Rohingya refugees are children.

The international community must put pressure on Myanmar to stop this massacre, make arrangements for the safe rehabilitation of Rohingyas inside Myanmar and, most importantly, recognise them as Myanmarese citizens.

The role of Bangladesh during one of the worst humanitarian tradegies in recent world history is highly noteworthy, especially because the country itself is suffering from various crises. The way the common people have extended their support and reached out to the Rohingyas shows the uncommon courage of the Bangladeshis.

Also read: Why Rohingyas are easy scapegoats for Indian government

#Aung San Suu Kyi, #Myanmar, #Bangladesh, #Rohingyas
The views and opinions expressed in this article are those of the authors and do not necessarily reflect the official policy or position of DailyO.in or the India Today Group. The writers are solely responsible for any claims arising out of the contents of this article.

The writer is assistant press secretary to the prime minister of Bangladesh, Sheikh Hasina.