Why India must treat the Rohingyas with magnanimity

We must be sensitive to their plight considering our own people were expelled in 1962.

Not many Indians are aware that until 1937, Myanmar was administered as a part of India by the British. This led to a dominance of Indians, especially from the Southern states, in the administration of Myanmar. Burmese Indians continued to be prominent in the economy even after Myanmar was separated from Indian administration.

In the '30s, there was a shortage of rice and Indians — primarily being the money lenders — became the target of anti-Indian riots that broke out in Burma.

At the time of Burma’s Independence however, the ethnic Rohingyas, who are primarily Muslims domiciled in the state of Rakhine (formerly known as Arakan) demanded that the Mayu Peninsula secede from Myanmar and be merged with East Pakistan. The movement was a flash in the pan and soon fizzled out. Nevertheless, the relations between the ethnic Rohingyas and the Rakhine Buddhists were strained and have since been simmering.

Meanwhile, in 1962, after a coup got him to power, General Ne Win ordered the expulsion of Indians and nationalised many Indian-owned businesses. Having been made scapegoats many Indians returned leaving behind their entire life savings, while some Rohingyas continued their muted demands for a separate state, albeit the secessionists didn’t enjoy much support from the people.

They continue to suffer a great deal at the hands of an insensitive government that refuses to recognise them as citizens. The Myanmar government contends that they are illegal immigrants who have entered the country in the '40s and post the India-Pak war of 1971 even though the Rohingyas have been in Myanmar for centuries. With a hostile government and public, the Rohingyas continue to be persecuted.

They live in ghettoised communities with scant scope for human rights and basic dignity. The common Rohingyas are caught in the crossfire between the government forces and the insurgent Rohingya groups.

The Myanmar government forces target ordinary Rohingyas with brute force for the actions of the insurgent groups. The latest exodus was triggered off in 2012 when a conflict between Rakhine Buddhists and Rohingya Muslims resulted in riots in which Muslims of all ethnicities began to be targeted.

And the flashpoint, which is the cause for the current dire situation, are the skirmishes between the Myanmarese forces and an insurgent group called the Arakan Rohingya Salvation Army, led by Rohingya rebel Ata Ullah, who was born in Karachi and grew up in Saudi Arabia. 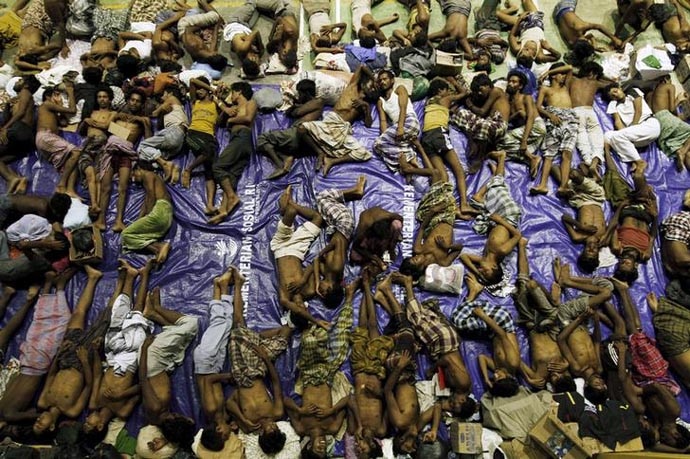 The latest exodus was triggered off in 2012 when a conflict between Rakhine Buddhists and Rohingya Muslims resulted in riots in which Muslims of all ethnicities began to be targeted. Photo: Reuters

Close to a 1,00,000 people have been displaced and have no one to speak up for them. Despite Myanmar returning to a feeble democracy, its Nobel Peace Prize-winning leader, Aung San Suu Kyi has been unmoved by the plight of the Rohingyas. She appallingly defended the persecution of the Rohingyas by asking Human Rights activists — Show me a country without human rights issues! Left with no one to care for them, thousands of Rohingyas have fled in sheer desperation and seek to live as refugees rather than face certain death in their home country.

Many have sought refuge in India, but the Indian government too seems unmoved by their heart wrenching plight. The few noises the Indian government is making are restricted to whether we are obliged by the non-refoulement clause — a principle in international law that prohibits nations from deporting asylum seekers to their home country where they are certain to be persecuted.

The legality of the matter aside, India should be magnanimous and accommodate the Rohingyas and help rehabilitate them. The argument that we cannot afford to sustain an influx of so many refugees is rather cruel as the number of Rohingyas in India is only a few thousand. Surely, we can assure them safety and security if not their livelihood, despite our meagre resources.

We must be sensitive to their plight considering our own people were expelled in 1962. As Indians, our public conscience should pay heed to the pain our people suffered in Uganda during the Idi Amin era. When we expected help for our people in the '60s and '70s, why can’t we help people in a similar wretched situation today?

Meanwhile, we could use our diplomatic prowess to impress upon the international community to consider using the Responsibility-to-Protect clause of the United Nations to pressure the Myanmar government into acting responsibly and with humanity.

It is in moments of crises that India must display its leadership if we want to be a formidable regional power. Let not our collective apathy become a crisis of conscience.

#India Myanmar Ties, #Rohingyas, #Rohingya Muslims
The views and opinions expressed in this article are those of the authors and do not necessarily reflect the official policy or position of DailyO.in or the India Today Group. The writers are solely responsible for any claims arising out of the contents of this article.