Certainly better than water wars or covert ops, but it remains to be seen if the summit cancellation has political use beyond optics.

The cancellation of the SAARC 2016 summit that was supposed to be hosted by Islamabad is nothing short of a diplomatic coup engineered by New Delhi's relentless global persuasion to "isolate" Pakistan as a "state sponsor of terror".

Hours after Prime Minister Narendra Modi announced that he would be unable to attend the South Asian Association for Regional Cooperation 2016 summit in Islamabad, Bangladesh, Bhutan and Afghanistan premiers sounded equally reluctant notes that sent out a message that was loud and clear.

Prime minister Sheikh Hasina of Bangladesh and President Ashraf Ghani of Afghanistan relayed sharp unhappiness over Pakistan's constant use of terror as state policy. The eight-member SAARC is, however, an important regional bloc and India-Pakistan rivalry can precipitate a wider unrest in the region which can have negative impacts on the co-dependent economies. Here are key takeaways from the SAARC riposte that New Delhi wielded on Islamabad:

Boycotting the SAARC summit by not one but four members of the regional bloc is an effective message to Pakistan that cross-border terror wouldn't be tolerated. After the Dhaka bakery attack and repeated bomb blasts in Kabul and other major cities of Afghanistan, the two neighbours - on the east and the other on the west - are equally tired of battling terrorism with definite links to Pakistan's ISI.

Heavily populated countries such as Bangladesh and a western neighbour with enormous geostrategic significance such as Afghanistan are extremely important for India's political and economic stability. Because Pakistan has literally treated both the countries as its fifth and sixth provinces, and because terror is a hindrance to economic development, this new axis of cooperation against terrorism can exert maximum pressure in South Asia.

Exercising strategic restraint after Uri attack has certainly paid off, especially after the stellar repartee from Eenam Gambhir to Nawaz Sharif at the UNGA and Sushma Swaraj's tempestuous, no-holds-barred speech on September 26. For PM Modi, the SAARC win is exactly what would pave the road to future strategy on Islamabad. 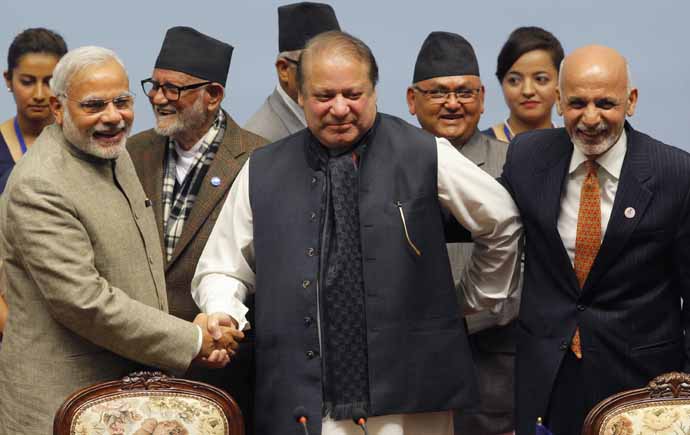 SAARC is a cornerstone of South Asian regional cooperation and must not be sacrificed at the altar of India-Pakistan rivalries. [Photo: Reuters]

It's however equally important to note that Nepal, the current chair, is bound by protocol not to take sides and because SAARC summit necessitates presence of every member to be held, cancellation was a given in the wake of four countries opting out. However, India's terrible meddling in Nepal in the wake of the 2015 earthquake and losing points with Madhesis last year after it effected an economic blockade left Kathmandu bitter and untrusting of India.

SAARC is an important geocultural and quasi-political bloc and its significance cannot be gauged only in terms of narrow strategic points. Moreover, as a regional bloc of cooperation, it's a buffer, even if almost ineffective, against Beijing's imperial interests in South Asia, particularly in Pakistan and Nepal. A sense of South Asian solidarity is not just a matter of political coherence, but also a strategic safeguard.

Also read: SAARC needs to look beyond India and Pakistan to succeed