SAARC: How Pakistan, China and Nepal are finally cornering India

Kathmandu, as the current chair of SAARC now under a new PM, wants Beijing to join the regional grouping to counter New Delhi's influence in the region.

Pakistan and Nepal agreeing to revive the SAARC process has send alarm bells ringing in New Delhi. The visiting Pakistan Prime Minister, Shahid Khaqan Abbasi, met his Nepal counterpart KP Sharma Oli in Kathmandu and urged the leaders of Nepal to play their role as the chair of SAARC for early convening of the summit in Islamabad.

Abbasi also held meeting with chairman of the CPN (Maoist Centre), Pushpa Kamal Dahal "Prachanda", and addressed a programme organised by the SAARC secretariat in Kathmandu.

Abbsi and Oli now plan to corner New Delhi by holding the 19th SAARC Summit in Islamabad which was cancelled in 2016 due to boycott by all SAARC countries showing solidarity with India following the terrorist attack at Army base in Uri, Jammu and Kashmir.

Earliar, Nepal as the chair of SAARC could not boycott the summit, but had refused to convene the summit in Islamabad. Sources say that Nepal, as the current chair of SAARC now under a new PM - who is the chairman of the communist party of Nepal CPN-UML - wants China to join this regional grouping dominated by India. 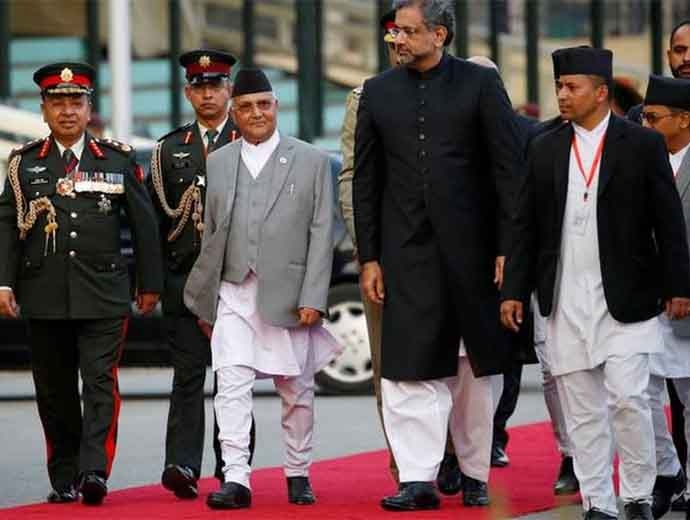 The statement by Bishnu Rimal, the chief advisor to PM Oli, that the two PMs discussed to enhance regional development and agreed to make SAARC a more effective organisation by infusing more vigour into it by taking other initiatives, points towards the next moves by the duo to bring in China and  isolate India, which founded and nurtured SAARC.

The move to revive the now-dormant SAARC by Islamabad and Kathmandu may also get support from other South Asian nations. Maldives is likely to support all moves by Pakistan at this juncture, especially as the bilateral relations between Male and New Delhi are at their lowest point ever.

Mohamed Nasheed, the exiled former president of the Maldives, who has received support from Beijing to remain in his seat would certainly like China to join the SAARC.

In the past, Bangladeshi diplomats in Dhaka have always been able to get more out of Beijing as compared to what was offered by New Delhi.They too will welcome China in SAARC to play a “balancing game” between the two biggies in Asia and extract the maximum benefits from both.

Afghanistan's President Ashraf Ghani, who is trying to mend fences with Pakistan and has showed his willingness to share power with Taliban, may also agree to join the SAARC Summit in Islamabad.

As the scales tip in favour of Pakistan, Sri Lanka and Bhutan may not like to remain outside the grouping and may join the party in Islamabad at the 19th SAARC Summit.

China is keen to join the SAARC to undermine India and is offering huge incentives under the String of Pearls and One Belt One Road schemes. As the levers of control slip out of India's hands, it seems the decision by the mandarins of the Ministry of External Affairs to leave SAARC in hibernation has turned out to be counter-productive for New Delhi.

This development has upset India as this may have grave implications for the country's global standing as regional superpower in South Asia.

Also read: Despite a wily Pakistan, Modi must not allow SAARC to collapse

#China, #Nepal, #Pakistan, #India
The views and opinions expressed in this article are those of the authors and do not necessarily reflect the official policy or position of DailyO.in or the India Today Group. The writers are solely responsible for any claims arising out of the contents of this article.

Author is a freelance journalist.