Will the Sabarimala issue politically benefit BJP as it eyes ‘Hindu votes’ in Kerala for 2019?

Kerala is now on the verge of a political shift, one that could be advantageous to the BJP.

On September 28, the Supreme Court ruled that the Sabarimala temple’s exclusion of women of childbearing age was unconstitutional because it discriminated against women based on biological factors, and was against the spirit of equal rights and individual dignity guaranteed by the Constitution. “Patriarchy in religion cannot be permitted to trump over… the freedom to practice and profess one’s religion.”

With these words the Supreme Court opened the doors of Kerala’s Sabarimala temple to all women, irrespective of age. The apex court verdict went against long-held beliefs and sentiments of Ayyappa devotees. “Patriarchy in religion cannot be permitted to trump over… the freedom to practice and profess one’s religion.” (Photo: PTI)

Interestingly, this historic verdict was initially welcomed by the Bharatiya Janata Party (BJP) and its parent organisation, the Rashtriya Swayamsevak Sangh (RSS). Soon after the judgement, the RSS said that it would honour the verdict and held that all devotees have equal rights to worship at a temple, irrespective of caste and gender. The same day, the BJP also said that the party did not support any discrimination against women in temples.

But, the next day, however, the Sangh made an about-turn, opposing the court’s ruling — perhaps, sensing that the controversy would help the BJP make gains among Hindu voters in next year’s Lok Sabha election.

Realising that its stand would also go against the larger sentiments prevailing amongst Hindu devotees, even the BJP made a U-turn. The saffron party, now leading the “Sabarimala Protection” long-march in Kerala, has made its intention clear that it will expand the stir over the issue to South Indian states. BJP President PS Sreedharan Pillai criticised the CPI(M)-led Left Democratic Front (LDF) government’s decision to implement the apex court’s order.

Why this volte-face by the BJP?

The change in the BJP’s stance is nothing more than a damage control measure — the BJp cadre cadre joined the protest on the ground and launched a massive yatra from Pandalam, the erstwhile “kingdom of Ayyappa”. The BJP’s spearheading of the Sabarimala protests could give it sufficient leverage when the Lok Sabha election is not too far. (Photo: Reuters)

Perhaps realising Sabarimala’s potential to generate votes; the BJP did not take long for the saffron outfit to do a volte-face on the issue. Since then, the BJP has spared no effort to convert the state-wide namajapa yatras (prayer processions) and demonstrations into an agitation against the Pinarayi Vijayan-led LDF government in Kerala.

The BJP has long struggled to make inroads in Kerala. The party has only ever won one seat in the state, in the 2016 Assembly election. For long it has been on the lookout for an issue that could propel them beyond their fringe existence in the state, and the Supreme Court’s verdict on the entry of women in the Sabarimala temple could not have come at a more opportune time for the BJP. The Sabarimala agitation provides the BJP with an opportunity to become the representative of the larger Hindu sentiment in the state.

Will Sabarimala help the saffron party to make its footprints in 2019?

For a party that opened its account with just one seat in the state only as recently as 2016 in the assembly election and has no Lok Sabha seats in the state in its kitty, it might sound like a pipedream.

The BJP has never won a Lok Sabha seat from Kerala despite its parent organisation, the RSS having a strong organisational base in the state. In the 2014 General Elections, it was the Congress-led United Progressive Alliance (UPA) that won 12 out of the 20 seats in Kerala.

Narendra Modi is not oblivious of the fact that in 2014, the BJP's tally almost saturated in many North Indian states. It has already peaked in 12 North Indian states and now, it would be difficult to add any more states in 2019. The Gujarat elections only reveal that the BJP is bound to lose at least some seats in its bastions that it won in 2014. Therefore, the party is desperately looking for compensating this loss — it sees Kerala as another frontier for itself.

The Congress party has staged demonstrations to express solidarity with Ayyappa devotees. Being the principal Opposition in Kerala, the party threw in its weight with the Ayyappa devotees opposing the verdict even before the BJP formally did.

The Congress has been concerned ever since the BJP won 15 per cent of the votes in the 2016 Assembly election by making inroads into the grand old party’s Hindu vote bank. Therefore, by aligning with the protestors, the Congress hopes to regain lost ground among the Hindu voters.

Not wanting to be outdone by the Hindutva camp, the Congress said that the party has maintained the most consistent position on the issue of Sabarimala among all political parties and to buttress their claim, they point to an affidavit submitted by the United Democratic Front (UDF) government in the Supreme Court opposing the entry of menstruating women into the Sabarimala temple.

Is the LDF in a tight spot?

The chief minister held that his government's —and the CPI(M)'s stand — on the issue was consistent since the VS Achuthanandan government submitted its first affidavit as a respondent in the case in 2007. 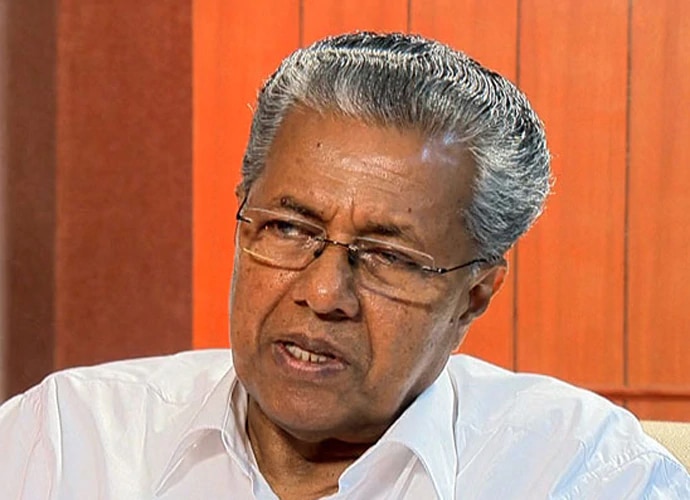 In a tight spot. (Photo: Indiatoday.in)

In an affidavit filed in courts in November 2007, the then Communist government, led by VS Achuthanandan, had clarified that it was in favour of allowing women of all ages to Sabarimala at all times and it did not want “discrimination towards any woman or any section of the society.”

And just before remitting office in 2016, the UDF government under the chief ministership of Congressman Oommen Chandy stated that it did not support the 2007 affidavit. When the present CPI(M)-led government under the chief ministership of Pinarayi Vijayan came to power in 2016, it again reiterated support for its 2007 affidavit. During the final hearing of the case, the Kerala government reiterated its stand in court that Kerala “does not conceive of any discrimination as regards the entry of women into the temple where male devotees can enter.”

Kerala is now on the verge of a political shift, one that could be advantageous to the BJP.

It is pertinent to know that Hindus made up just about 55 per cent of Kerala’s population. In the last four years, BJP President Amit Shah has made several visits to Kerala to find ways of expanding the BJP’s footprint, but the party has been struggling to find an issue to sell its “Hindutva agenda” through. Therefore, in its quest to make a dent in Kerala, Sabarimala is just the kind of stimulus that the BJP needed to infiltrate the anti-Left space that the Congress has occupied in Communist Kerala for decades.

The BJP’s spearheading of the Sabarimala protests could give it sufficient leverage when the Lok Sabha election is not too far.

#CPI(M), #Kerala, #BJP, #Sabarimala temple verdict
The views and opinions expressed in this article are those of the authors and do not necessarily reflect the official policy or position of DailyO.in or the India Today Group. The writers are solely responsible for any claims arising out of the contents of this article.