Why religions in India discriminate against women

If women can fly fighter jets, surely they can be allowed the same access to places of worship as men, or even become priests.

Their unique achievements go down in the hall of fame for a country that already has more women commercial pilots than any other, and where women who are successful politicians, sport stars and CEOs now don't attract a second look. But there is one glass ceiling that keeps women out — religion. The doors of a large number of shrines are still closed to women. This bastion too is now being challenged.

On September 28, the Supreme Court paved the way for women of all ages to enter the Ayyappa temple in Sabarimala, Kerala. Four of the five judges on the constitution bench said the temple ban violated the fundamental rights of Hindu women.

These entry barriers are really a metaphor for what is essentially a settled patriarchal and male-dominated religious order, which has continued unchallenged for centuries. Patriarchy, or the power of men over women, continues into the religious spaces when it denies agency or autonomy to women.

In Hinduism, male gods are incomplete without their female consorts. But women are deemed unclean when they menstruate and, hence, kept out of kitchens and temples like Sabarimala. In different ways, the practices of every major global religion reflect an inherent patriarchy. The clergy are largely a men-only club. This is why the Supreme Court verdict on September 28 is ground-breaking, because it highlights the skewed relationship between women and religion.

The judgment by the four Supreme Court justices recommends abandoning 'the dualism that persists in religion by glorifying and venerating women as goddesses on one hand and by imposing rigorous sanctions on the other in matters of devotion'.

This is one in a series of enormously significant Supreme Court judgments upholding women's rights. Last August, the court held that triple talaq had no legal validity. Earlier this year, it ruled that the legitimacy of an adult woman's marriage by her choice could not be questioned. In another landmark judgment, it upheld the right of daughters to claim an equal share in their ancestral property.

Our cover story, 'Sexist Gods', looks at why men still call the shots in all of India's religions and why religion discriminates against women. Our galaxy of guest writers who have closely looked at this peculiar religious patriarchy — authors Pavan K Varma and Devdutt Pattanaik, the historian Uma Chakravarti, literary historian Rakhshanda Jalil, lawyer Flavia Agnes and women's rights activist Syeda Hameed - explain why it is now untenable. 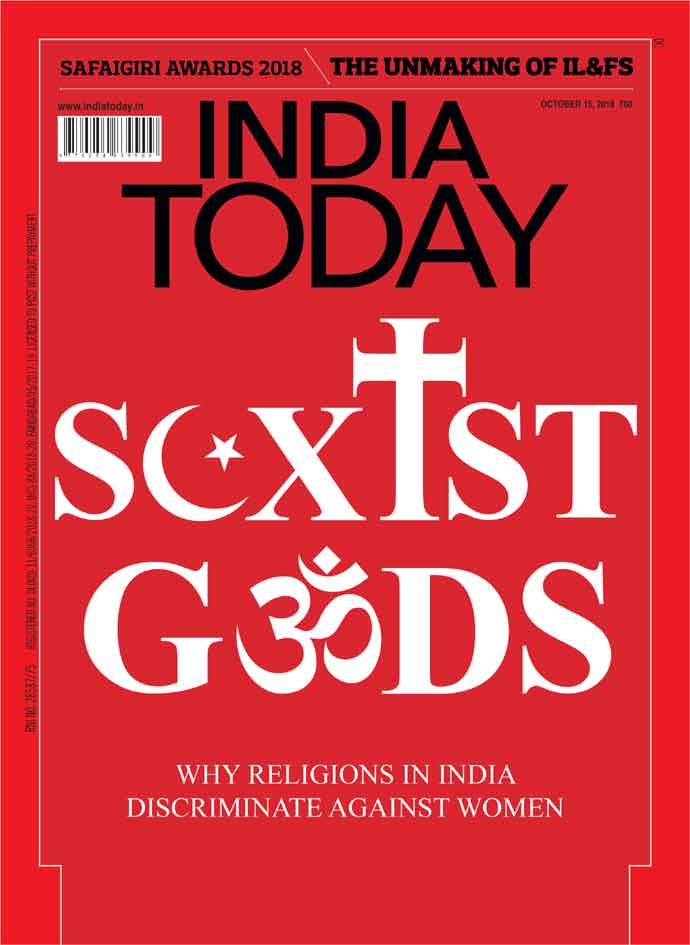 We also have profiles of women who have swum against the religious tide. Mahant Devyagiri of Lucknow's Mahakameshwar temple, the only woman head priest of a major Hindu temple. Noorjehan Safia Niaz of the Bharatiya Muslim Mahila Andolan, who got the court to allow women to visit the inner sanctum of Mumbai's Haji Ali dargah, and Gulrukh Contractor Gupta, who is fighting for equal rights for Zoroastrian women.

I believe if religion is to remain relevant, it has to keep up with the times. The various faiths must reflect the society where they are practised while adhering to their core beliefs. Women's emancipation and gender equality has been a movement for over a century and still continues.

Women form half our population and cannot in today's age be denied their fundamental freedoms. Most importantly, they should have the freedom to choose. After all, if women can fly fighter jets, surely they can be allowed the same access to places of worship as men, or even become priests. The world will be a better place for it.

Post your comment
#Religion, #Menstruation, #Triple Talaq, #Sabrimala
The views and opinions expressed in this article are those of the authors and do not necessarily reflect the official policy or position of DailyO.in or the India Today Group. The writers are solely responsible for any claims arising out of the contents of this article.