Why Pilot’s moves may cause turbulence

Will Sachin Pilot split the Congress, forming a new political outfit that will attract other “young Turks”? Or will he actually join the BJP as Scindia did?

The first thing to realise about the political crisis in Rajasthan is that Sachin Pilot is not Jyotiraditya Scindia and Rajasthan is not Madhya Pradesh. These are crucial differences. The numbers don’t stack up in the same way in the two states.

In the 2018 Madhya Pradesh elections, the gap between the Congress and the BJP was a mere five, 114 to 109. When Scindia defected with 22 MLAs, the Kamal Nath government was sure to fall. In Rajasthan, the Congress bagged 100 seats to BJP’s 73 in the 2018 assembly elections in the 200 member house. In September 2019, all 6 of the BSP MLAs joined the Congress, thus augmenting their lead over the BJP to 107 vs. 72.

Unfortunately for Pilot, his utility, whether to the Congress or the BJP, hinges on whether he can actually topple the Gehlot government. As of now, his assertion of the support of 30 MLAs appears somewhat overstated. At the ITC hotel in Manesar Gurugram, where his faction is holed up, not more than 18, going by the short video clip released by his camp, are with him. But if horse-trading is the name of the game, Gehlot doesn’t seem quite secure in his seat or, should we say, saddle either. To rephrase Kapil Sibal’s tweet, Pilot and his renegade horses have bolted the Congress stable.

On Monday night, over 100 MLAs showed up at the CM’s residence in Civil Lines, Jaipur. The Congress Legislature Party (CLP) passed a resolution in his favour. In the process, also taking a dig at the opposition BJP, for “cheer haran,” trying to strip democracy and rob eight crore Rajasthanis of their election verdict. Randeep Singh Surjewala, the Congress point man sent from Delhi, said “The Congress government will complete five years in Rajasthan. However hard the BJP tries, it won’t be able to topple the elected government.” 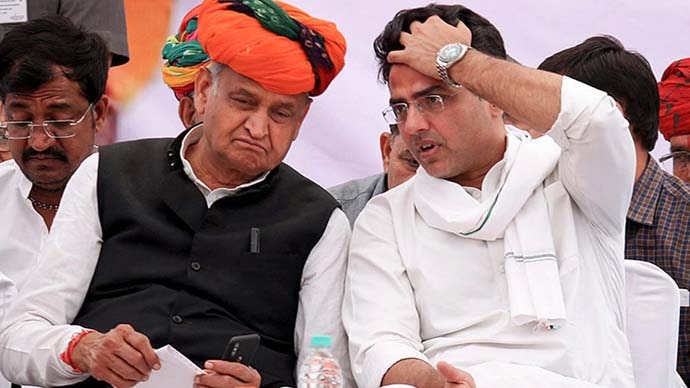 Pilot's utility, whether to the Congress or the BJP, hinges on whether he can actually topple the Gehlot government. (Photo: Reuters)

After the show of support, to prevent any poaching, the Gehlot group was shifted to the Fairmont luxury resort on the Delhi-Jaipur highway.

The Congress party, in damage control mode, scheduled another CLP meeting for Tuesday. Surjewala said that his party’s doors are open to Pilot: “If there are some differences with someone then they should say that that with an open mind. Sonia Gandhi & Rahul Gandhi are ready to listen to everyone and find a solution.” Rahul and Priyanka Gandhi also reached out to Pilot, as did senior leaders. Believed to represent the pro-reform younger camp, ex-spokesman, Sanjay Jha, also came out in support of Pilot. After he refused to attend the CLP meeting, the Congress on Tuesday afternoon sacked Sachin Pilot from the posts of Rajasthan’s deputy chief minister and the party's state unit chief. The party also removed Pilot loyalists Vishvendra Singh and Ramesh Meena from the state cabinet.

The fact is that Pilot enjoys considerable sympathy in the highest echelons of the party. He is credited with tilting the electoral fortunes of the 2018 elections in favour of the Congress. Pilot spent five years in the state working hard to help his party win. The belief is that he was promised the Chief Ministership, but Gehlot upstaged him. Pilot felt betrayed. Reluctantly he accepted the lame-duck post of Deputy Chief Minister, in addition to the state Congress presidentship. The latter position still carried considerable clout, which Gehlot may have wanted to reduce.

The breaking point, some say, came when Ashok Gehlot’s son, Vaibhav, lost in the Jodhpur constituency in the 2019 Lok Sabha election to Gajendra Singh Shekhawat of the BJP. The Gehlot camp blamed Pilot. Others claim that the trigger was the summons issued to Pilot, at Gehlot’s behest, by the Special Operations Group of the Rajasthan police. The notice was also issued to the CM himself, but Pilot supposedly was its real target. Recently, the Enforcement Directorate raided Fairmont Resort, allegedly owned by Vaibhav’s business partner, Ratan Kant Sharma. This is the same resort in which Gehlot’s supporters are hunkered down. The power struggle between Gehlot and Pilot, which had been simmering for so long, has now come to a boil.

The BJP, on its part, has been maintaining a strategic silence, claiming that the crisis is part of the internal conflict inside the Congress. True. Congress is riven by multiple problems, the crucial one of which is an inter-generational fight between the old guard and the younger leaders. Many of the latter, including Rahul Gandhi, have now entered their fifties. They feel it is their turn to run the party, saving it from further decline. Time seems to be slipping out of their hands. How long are they to wait? The BJP is sure to benefit by the internal dissensions and frustrations in the Congress. It is the only clear winner of the revolt in Rajasthan.

A coup in the making?

In politics, as in life, winning and losing is a part of the game. But even if you can’t win, you don’t have to lose. Not losing is as much an art as is winning. But you must realise that not winning is not the same as losing. So far, Pilot has clearly said that he will not join the BJP. A capable leader, well-spoken, with a clean image, he also has a grassroots support base. Will he split the Congress, forming a new political outfit that will attract other “young Turks”? Or will he actually join the BJP as Scindia did? In either case, the BJP may pull off yet another coup in Rajasthan. We will have to wait and watch.