Sainik schools: Do we need to make India more masculine or are we just insecure?

Umpteen examples can be cited of saffronisation of education in the past three years. The HRD ministry has been unabashed and relentless in its pursuit of an idea of education that is high on aggressive masculinity. Martial prowess, physical strength and athleticism are the virtues that need to be instilled in young students with utmost urgency, according to the plan.

The recent PMO advice to the ministry to include elements of military schools (sainik schools) in regular schools should be seen in the larger context of the Sangh Parivar's obnoxious attraction for a virile and masculine Hindudom.

Discipline, physical fitness and a patriotic outlook are purported to be the venerated elements. The identification itself marks a neat distinction between regular schools, which either don't espouse such traits, or are simply devoid of them by giving more emphasis on nurturing cerebral spaces.

These elements invariably remind us of the Hindu Mahasabha’s idea to strengthen the Hindu community through sanghatan (Hindu unity), which “was viewed as a means of national regeneration in the face of demilitarisation and emasculation perpetrated by the British on Indians” (Prabhu Bapu).

These elements were valourised in resistance to the projection of Indians as “weak” and “cowardly” by the British. TB Macaulay would ridicule the physical organisation of a Hindu by calling him “feeble even to effeminacy... His pursuits are sedentary, his limbs delicate, his movements languid."

This horror of community-shaming and the impending desire of revenge by creating muscular bodies for “self-rule” lingers to this day. The notion of an ideal Indian male (read physically strong) constitutes the basis of a healthy nation. Sexuality matters over here as these elements reflect the impending desire arising from a deep fetish of the oriental exotic.

This apparent lack of Victorian masculinity made the British perceive Indians as having feeble bodies which were of no good other than having bookish minds. This situation was seen as Indians being highly ingenious in supporting “negative” traits' like deceit and manipulation which easily got brandished as less patriotic or even anti-patriotic.

In this background, it was more of an insecure male reaction to military heroism, discipline and martial prowess that was thought to be in abundance in the projection of Christian manliness.

This is needed because merely minding your own work by honing skills in articulating and interpreting complex social phenomenon doesn't quite bring a sense of honour and dignity to the community at large.

At one level, it becomes a surreptitious project of subsuming citizenship under the more bellicose narrative of community enlargement. The community idea is crucial as only by focusing on that can one revitalise and resurrect a past whose primary signpost was supposed to be identified with masculinity. 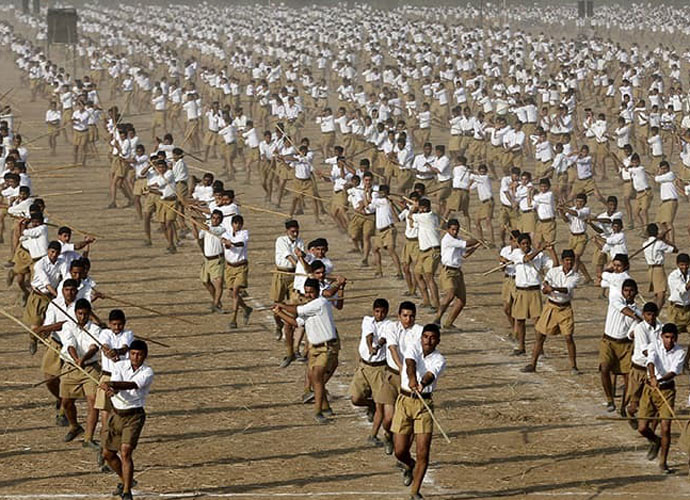 This apparent lack of Victorian masculinity made the British perceive Indians as having feeble bodies. Photo: Reuters

It is important to understand the genesis and significance of local sainik schools that emerged in the early half of the 20th century. The moral universe of a sainik school was primarily seen as a model that would integrate the nation and the community.

The ethic of militarism was the cornerstone, the fundamental basis by which this was going to be realised. The inspiration behind military schools and colleges came from the works of BS Moonje, a sanghatanist intellectual who was deeply enamoured by the militarisation programme of Italian fascism.

His extreme fascination with war and militarism can be brought out by him visiting Military College, Central Military School of Physical Education, the Balilla and Avanguardist organisations in Rome in 1931.

The rise of the famed Bhonsala Military school in Nashik in 1937 was also the rise of an ideology that injected a hyper dosage of patriotism through physical fitness being its primary guiding tool for forging a united commune against the “other”.

The radicalisation of militarism was all the more evident when the Minister of State for HRD Dr Mahendra Nath Pandey in October last year emphasised the need for military education of students to promote patriotism and nationalism.

He pointed out how weak the Nalanda students were as they failed to stop the onslaught by Bakhtiyar Khilji to plunder the institute. The conceptualisation of the past in three broad strokes - ancient period boasting of Hindu supremacy, medieval being an age of subjugation and slavery and the British period signalling the time to reassert one’s lost glory is quite evident by this example.

There have been considerable additions to the "other" (modern nation states for instance) but the language deployed retains the anxiety and misplaced fear of the original “other”. Discipline over here is prescribed along with physical fitness if one is to become the protector of the nation.

Discipline, as Michel Foucault would remind us, needs to be seen in conjunction with power. It's three normalising techniques of control - hierarchical observation (control over people by merely observing them);  normalising judgment (correct deviant behaviour, in our case to wipe out the natural inquisitiveness of a student) and examination (which controls the natural behaviour, again, in our case, something that limits modern imaginations to merely protecting a vacuous sense of pride and jubilation).

When this disturbing defence of discipline dovetails with an incorrigible insistence on physical valour and triumph, what suffers is the free flowing development of the increasingly neglected cerebral space.

By regurgitating elements that form the basis of Hindutva, a systematic dissemination of a poisonous vision embarks the future of school education in India.