Why the Salma Dam in Afghanistan matters to India

Through this project in a province where Sufism originated, India has finally offered 'guru dakshina' to the messengers of peace.

Prime Minister Narendra Modi embarked on his five-day five-nation visit on June 4 with a whistle-stop visit to Afghanistan, the youngest member of the South Asian Association for Regional Cooperation (SAARC) and a country under a decade-long process of peace and reconciliation, and rehabilitation and rebuilding.

Media attention has focused primarily on Modi’s second bilateral visit to the US and to an extent on his stopover in Switzerland. What has missed our attention is that Modi’s visit to Herat in western Afghanistan to jointly inaugurate the newly-completed Afghanistan-India Friendship Dam (the Salma Dam, since renamed) with Afghan president Ashraf Ghani and have official talks with him, also constitutes the prime minister's second bilateral visit to Afghanistan - a key neighbour for India in south Asia - after December 2015.

The Salma Dam project, which was first mooted in 1976, started its journey with a WAPCOS team from India on the ground for the first time in 1988. 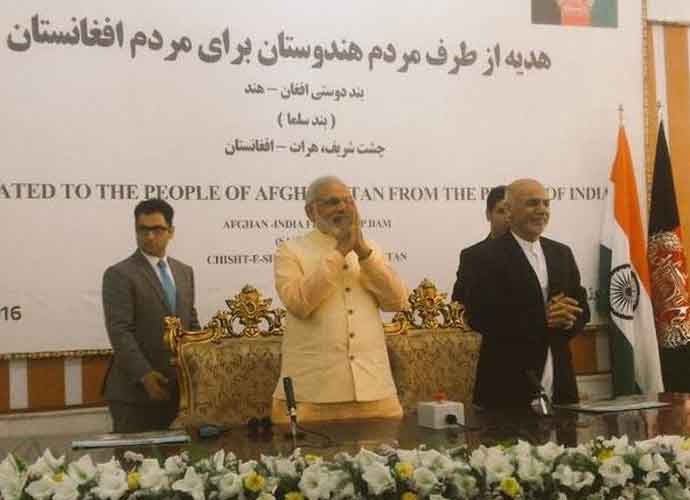 However, this power and irrigation project could not take off then owing to internal strife and takeover by the Taliban. Work on the project was restarted by WAPCOS on the heels of India’s second innings in Afghanistan in 2004, and this time round, India was determined to stay put as a strategic partner with a “... long term commitment to the security and development of Afghanistan”.

The project was designed to generate 42MW to electricity to light 250,000 homes, irrigate 75,000 hectares in 640 villages and augment drinking water supplies in the Chisti-e-Sharif province of the country, but it took longer than envisaged to complete this project because of poor infrastructure, lack of materials and skilled manpower and an extremely difficult security situation.

Indian engineers and technicians had to be taken from Herat to the work site and back by helicopter, and a large contingent of security personnel still guards the project 24X7 from possible terrorist attacks.

Considering that the Indian consulate in Herat was the target of a massive terrorist attack in May 2014 on the day Prime Minister Modi assumed office, such precautions were well worth the effort. Years of hard work by 1,500 engineers and other professionals from India and Afghanistan under difficult conditions culminated in the pressing of the switch jointly by president Ghani and Prime Minister Modi on June 4, which allowed the water to flow across from the reservoir through the dam to turn the three turbines in the power house and also fill the irrigation channels.

The Afghanistan-India Friendship Dam forms a part of major, medium and minor projects in which India has been the preferred assistance partner to Afghanistan in the post-Taliban period.

Indian grants, estimated to be over $2 billion has led to the culmination of major projects like the Zeranj-Delaram road, the Pul-e-Khumri power transmission line, the parliament building in Kabul and several other projects covering schools, healthcare, rural irrigation, buses, electricity distribution, capacity building and training programmes and so on.

The Salma Dam stands in the heart of the province in western Afghanistan from where the Chisti Silsila or Chisti tradition of Sufism came to India and found an abode in Ajmer, Delhi and Fathepur Sikri. In building and completing the dam, India has finally offered its "guru dakshina" to the messengers of peace, compassion and harmony.

#Narendra Modi, #India-Afghanistan ties, #Salma Dam
The views and opinions expressed in this article are those of the authors and do not necessarily reflect the official policy or position of DailyO.in or the India Today Group. The writers are solely responsible for any claims arising out of the contents of this article.

The writer was India’s ambassador to Tanzania and Azerbaijan.