The 'hua-toh-hua' controversy: Can PM Modi pledge a genocide law to counter Sam Pitroda's remark on 1984?

Mentions of the anti-Sikh riots of 1984 are routinely made around polls. Nothing real is done to alleviate the pain of those who suffered or those who remain vulnerable to such genocide.

It's a settled affair that the Sikh massacre of 1984 hardly sways elections in Punjab, the heartland of the faith. The state has elected the Congress to power twice in the past 17 years under Captain Amarinder Singh.

In pockets of Delhi — the main theatre of the savage killings back in 1984 — Congress candidates have also made their way to Parliament as well as the state assembly, in constituencies with a sizeable Sikh population in the past decade. Mahabal Mishra's election to the Lok Sabha from West Delhi in 2009 is an example of the Congress' revival in boroughs with a large Sikh presence, primarily because of the changed demography. Still Scarred: But 1984 is not an electoral issue which either benefit BJP or damages Congress now. (Source: PTI)

Moreover, Sikhs in cities where maddened mobs went on a rampage following the assassination of then-Prime Minister Indira Gandhi now have other options to vote for, if not the Congress party for 1984 and the BJP for its hard-line Hindutva ideology.

In Delhi, for instance, a number of Aam Aadmi Party (AAP) candidates were elected to the state legislature from Sikh-dominated neighbourhoods. So, it's absolutely clear that 1984 is not an issue that would benefit the BJP or damage the Congress party, electorally at least.

Still, it's raised in every election.

This time, it's cropped up just before the last two phases of the ongoing vote.

It's also unmistakably clear that Prime Minister Narendra Modi is setting the news agenda on national airwaves from the beginning of his campaign. So, when he introduced Rajiv Gandhi in his controversial speeches, the arrival of 1984 in his addresses was a foregone conclusion.

After all, neither Indira Gandhi, nor her son, Rajiv, can be delinked — historically, politically and morally — from what happened in Punjab from 1978, leading to the brutal events of 1984 and later. In the Sikh psyche, the two Gandhis remain the main architects of everything anti-Sikh that occurred during that period.

Unfortunately, the aides of the present-day Gandhi family, which certainly cannot be held responsible for the sins of omissions and commissions of their ancestors, still try to glorify Rajiv and his mother. Pitroda's insensitive "hua-to-hua" remark in connection with 1984 should be seen in the same light. Advertised in the media as Congress chief Rahul Gandhi's political strategist, he fell miserably into Modi's trap.

I acknowledged the pain of my Sikh brothers and sisters during difficult times in 1984 and deeply feel for the atrocities that happened.

This election is the most divisive in recent Indian history, post-1984. But unlike 1984, the Sikhs are not an issue this time. As mentioned before, 1984 doesn't also resonate as a voter concern in Punjab or elsewhere either.

Still, a politician as shrewd as Modi raised it — not to garner Sikh votes, to my mind, but to provoke the Congress party into a counter-attack over the 2002 Gujarat riots. Once that happens, the entire Sangh and its supporters would pounce in order to intensify Hindu-Muslim polarisation further in the last two rounds of general elections. The devotion is appreciated. But why hasn't the PM also noted the suggestions made by an hon'ble High Court? (Source: PTI)

Let's, for a moment, give the Prime Minister the benefit of the doubt. Let's assume he meant no politics. Let's assume that his heart genuinely bled for the Sikhs because of 1984.

If that's the case, let me draw the PM's attention toward scathing observations the Delhi High Court issued while sentencing Congress leader Sajjan Kumar to life in jail for his role in 1984.

Justices S Muralidhar and Vinod Goel called a spade a spade in their December ruling — paragraph 367.6 of their order underscored how critical it is for Indian democracy to incorporate special laws on genocide and crimes against humanity in our statutes. "In India, the riots in early November 1984 in which in Delhi alone 2,733 Sikhs and nearly 3,350 all over the country were brutally murdered (these are official figures) was neither the first instance of a mass crime nor, tragically, the last," the court wrote. 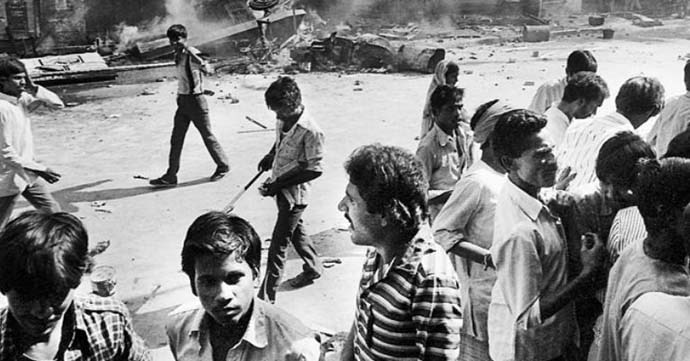 In the same paragraph, the Justices cited what they described as a "familiar pattern of mass killings" in Mumbai in 1993, in Gujarat in 2002, in Kandhamal, Odisha, in 2008, in Muzaffarnagar in UP in 2013, "to name a few". "Common to these mass crimes were the targeting of minorities and the attacks spearheaded by the dominant political actors being facilitated by the law enforcement agencies," the High Court noted.

The criminals responsible for the mass crimes, it observed, have enjoyed political patronage and managed to evade prosecution and punishment. Bringing such criminals to justice poses a serious challenge to our legal system, the court acknowledged. "As these appeals themselves demonstrate, decades pass by before they can be made answerable. This calls for strengthening the legal system."

The High Court pointed out that neither crimes against humanity, nor genocide is part of India's domestic laws for crime. "This loophole needs to be addressed urgently," the order read. Now that's something which Modi or his government could have pledged. He could, or should, have acted on the judicial call by now, instead of issuing emotive statements over 1984 as part of his trademark headline management.

#Sikh massacre, #Sam Pitroda, #1984 riots
The views and opinions expressed in this article are those of the authors and do not necessarily reflect the official policy or position of DailyO.in or the India Today Group. The writers are solely responsible for any claims arising out of the contents of this article.