Despite its members confessing to their role in bomb blasts, how much more time will it take to ban Sanatan Sanstha

First it was the February 2008 minor blast outside a theater at Panvel near Navi Mumbai. No one was caught. In fact the police for a long time was clueless about the culprits. The blast occurred during the screening of the film Jodha Akbar.

The only clue, the film had been widely opposed by some 'Hindu' fringe groups.

After a few months, one bomb was found at Vashi's (Navi Mumbai) play theater during the performance of the Marathi satire 'Aamhi Pachpute' and a few days later in June 2008 there was another low intensity blast at Thane's Gadakari Rangayatan play theater, when the same play was being performed.

This time it was quite apparent who was behind this. A group of 20-30 youngsters were constantly protesting against the play, they had even managed to get the name of the play changed from 'Yada Kadachit' to 'Amhi Pachapute' but were still not satisfied.

This group was affiliated to a Sanatan Sanstha ashram and was a regular at the sanstha.

Till then no one, specially in Mumbai, had taken note of this organisation.

During the years 2005/06/07 and 08 there were various blasts in different cities in India, responsibility for which were being claimed by an organisation called the 'Indian Mujahideen', so these minor blasts at the theaters came as a surprise.

Before that Sanatan Prabhat, a Marathi publication, was known for its hard (loosely translated in Marathi as Sanatani) Hindutva stand, with its representatives attending every press conference of the Home Minister of Maharashtra, questioning him about the 'Muslim' terror attacks or any other issues, which according to them were against the Hindu culture. India Today Special Investigation: The men admit on camera that they planted the bomb in Vashi. (Photo: India Today)

But when Maharashtra ATS arrested some Sanatan members for these blasts, it took everyone by surprise.

A total of six people were arrested but the ATS couldn't establish their direct link with the organisation, most of the time the police officers used to treat them as 'rookies' as they had to deal with the more dangerous 'Indian Mujahideen' which was on a rampage.

This was the time when Sanatan's spiritual outfit's face started withering away, their workers became more visible, their hard comments about radicals, rationalists and journalists became more evident and they become a regular feature on TV debates on anything which was considered 'anti-Hindu'.

That became the true face of Sanatan.

But the mystery around Sanatan remained intact.

Despite various debates and questions being raised in the Maharashtra Assembly sessions about Sanatan's activities, nothing could be done against them.

Subsequently out of the six arrested for the blasts cases two were convicted and four were acquitted, still no questions were raised over the investigation or the lack of evidence in the case.

Even those two were released on bail as the case moved to the high court.

Because all the accused had no criminal records, stringent laws like UAPA or MCOCA couldn't be imposed and subsequently the two convicted sadhaks were freed.

One of them, Vikram Bhave, was a regular at the court hearings later on in 2015, to help arrested accused Sameer Gaikwad in the Govind Panasare murder case.

Everything was now out in the open, still the investigating agencies and the government couldn't reign the activities of Sanatan. Narendra Dabholkar had campaigned for an anti-superstition and black magic Bill, which was passed after his murder. (Photo: PTI)

The Sanatan was growing, and the 'rookies' were now an actual threat with their activities now spread across Maharashtra, Goa and Karnataka.

What we would see in later years were four murders, Narendra Dabholkar in 2013, Govind Panasare and MM Kalburgi in 2015 and Gauri Lankesh in 2017.

The common thread, like in the 2008 blasts, was the same organisation's opposition to all these activists.

Meanwhile the proposal to ban the Sanatan Sanstha was forwarded in 2011 by then Home Minister of Maharashtra late RR Patil, when he was repeatedly pressured in the assembly by his own party men, but the center, it seems, was not interested to investigate some 'rookie' organsation.

Later on, Sushilkumar Shinde became the Home Minister in 2012, a dossier containing the details of 'secret' activities of Sanatan Sanstha was sent to the center with a request to ban the organisation but still nothing happened and the process kept on repeating even after the new government came to power in 2014.

The only difference was that the Maharashtra ATS in August 2018 arrested some sympathisers of Sanatan Sanstha, with a large quantity of arms, ammunitions and explosives who were plotting blasts across Maharashtra. This time the government slapped stringent UAPA, but still the Sanatan's name was not mentioned in the FIR. 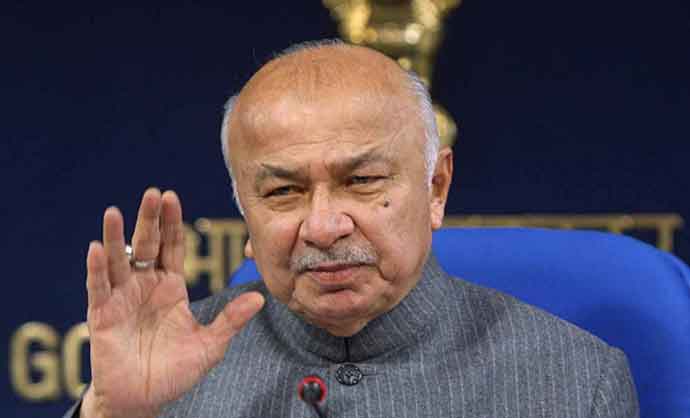 Sushilkumar Shinde sent a dossier containing the details of Sanatan Sanstha activities to the center with a request to ban the organisation but nothing happened. (Photo: PTI)

The Sanatan Sanstha's lawyers have continued to defend the accused arrested in all seven cases where Sanatan's name had been linked, under different pretexts - they are not the organisation's members just sympathisers of its activities or the people who have been convicted have done it of their own will or their 'sadhak' members have been wrongly implicated in the case.

For the first time the India today investigation has revealed Sanatan members accepting their role in the earlier blast cases of 2008.

Not only are they confessing on tape that the conspiracy was hatched in the Sanstha's ashram, both these people were acquitted in the blast cases, but their new confession surely brings to light how poorly the cases regarding Sanatan were handled, both on investigation as well as the political level.

If their activities could have been nailed 10 years back we wouldn't have seen today's brazen 'avatar' of the Sanstha, when they are fearless blabbering complete lies about those who are exposing them, and politicians openly calling them a spiritual organisation, ministers giving them patronage and the investigators still unsure if they can nail the Sanatan and its activities.

It seems action against Sanatan is not and will not be in black and white as had previously happened in the case of Hurriyat conference or the way it could happen in the case of Zakir Naik.

It's highly likely the politicians from both the sides know the organisations true face. But even though its members were caught saying (in santan tapes) "we could have killed anybody if we wanted to " or " yes I planted the bomb ", they still remain far from 'kanoon ke hath'.

Also read: Sanatan Sanstha members confess to India Today about role in bomb blast: How did authorities fail to discover this?