In one of the biggest crackdowns, simultaneous raids were conducted at 187 locations in Tamil Nadu, Delhi, Andhra Pradesh and Karnataka.

Since the demise of former Tamil Nadu chief minister J Jayalalithaa, things have not been good for the Mannargudi family that wielded a lot of power.

Within two months, Sasikala Natarajan was convicted in the disproportionate assets case. At the same time began the ongoing battle for the succession of the AIADMK. From losing foothold in the party to fighting the two-leaves symbol case, and now the recent income tax raids on the properties of Sasikala and her close aides — there have been back-to-back blows for the Mannargudis.

On Thursday, November 9, under the cover of a marriage party – Srini weds Mahi – simultaneous raids were conducted at 187 locations in Tamil Nadu, Delhi, Andhra Pradesh and Karnataka. This has been one of the biggest crackdowns in the recent past.

Sasikala’s nephew, TTV Dinakaran, said, “The raids are an attempt of removing Sasikala and me from the politics in Tamil Nadu, but we are not going anywhere.”

Opposition party leader MK Stalin, too, questioned the outcome of the raids that took place previously. The CPM also condemned the raids. Issuing a statement, G Ramakrishnan, state secretary of the CPM, said, “This gives credence to the theory that investigative agencies like the CBI and income tax department are being used by the BJP for its political plans.” Search on properties belonging to Sasikala and her relatives continued for the second day as well. 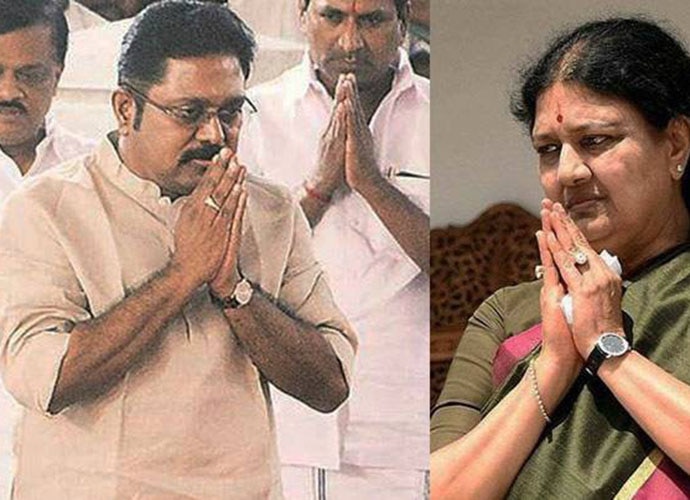 Sasikala’s family is referred by many as the Mannargudi mafia. During Jayalalithaa’s time, the family used to enjoy the clout. From education, entertainment to liquor, they have their hands full in every trade. With Sasikala and her sister-in-law, Ilavarasi (Jayaraman’s wife), in Bengaluru’s Parpana agrahara, most of the show is run by TTV Dinakaran, at least on the political front.

Sasikala’s elder brother, Dr V Dhivaharan, is known as the boss of the Mannargudi clan and is known to have a lot of influence in Tamil Nadu’s delta regions. Apart from owning huge properties at Mannargudi, a town in Tiruvarur district of Tamil Nadu, he runs a girls’ college, Sengamala Thayaar Educational Trust Women’s College. His properties have also been raided for the last two days.

Others in the line of fire of the I-T department include Ilavarasi’s son Vivek Jayaraman, who is the CEO of Jaya TV, and the MD of Jazz Cinemas. Raids are being conducted on his house and other properties belonging to these two organisations. Vivek’s brother-in law, Krishnapriya’s husband Karthikeyan Kaliyaperumal, co-owns Jazz cinemas, and raids were conducted on his properties as well.

Besides these, raids were conducted at the MIDAS groups, which is a distillery in which Sasikala and Ilavarasi have stake. Also on the list of the I-T raids were Dr Venkatesh and Dr Sivakumar – Sasikala’s brother Sundaravathanam’s sons. Another brother Vinodhagan’s son TV Mahadevan, too, couldn’t escape the searches. TTV Dinakaran’s farm house in Pondicherry was also raided. Apart from these influential family members, many of the close associates of the family are on the I-T radar. Interestingly, properties of both of the AIADMK mouthpieces– Jaya TV and Namadhu MGR–were raided. Namadhu MGR, which was launched in 1972 by MGR, is facing raids for the first time since inception.

As the raids continue, the once-powerful family doesn’t seem to be affected. "We have faced similar scenarios in the past. Even if we have to go to prison, we will come back to prove our innocence,” said a confident TTV Dinakaran at a press meet.