Why did BJP field Satya Pal Singh Baghel against Akhilesh Yadav from Karhal for UP 2022?

BJP has fielded Union Cabinet Minister Satya Pal Singh Baghel against Akhilesh Yadav in Karhal. Why did the minister file the nomination right after Akhilesh?

Baghel, a former SP loyal, once a Mulayam Singh Yadav confidante and a prominent OBC leader, was picked by the BJP to give a tough fight to SP leader Akhilesh Yadav.

The decision taken by the BJP looks like a careful move to make the contest in Karhal a competitive fight against the SP. The constituency has a sizeable chunk of SC voters along with Yadav, which might fetch votes for Baghel.

Baghel, after filing his nomination, said that the war will be full of surprises and that the announcement of his candidature was the first one.

Charging at Akhilesh Yadav, Baghel said, ”The Karhal seat is not Akhilesh’s personal constituency. And he should remember this.”

But who is Baghel, what was his proximity to SP and why does he want to fight Akhilesh in UP despite being a Union Minister?

Here are the answers. Baghel was no politician but a sub-inspector in the Uttar Pradesh Police Force. He was born in the Bhatpura village of Auraiya district of Uttar Pradesh in 1960. His father too was a policeman, posted in Madhya Pradesh. Satya Pal Singh Baghel's first job as security officer was under UP CM Narayan Dutt Tiwari. In 1989, he met Mulayam Singh Yadav, who inducted him into his security.

Baghel was the personal security officer of Mulayam Singh Yadav. He had risen up the ranks by winning the SP patriarch over. Soon, Baghel found his way to the Lok Sabha in 1998. He was made the President of Mulayam Singh Youth Bridage in 1992. In 1998, Mulayam gave him an SP ticket from Jalesar, a constituency Baghel won thrice; in 1998, 1999 and 2004.

The Union Minister still has his affection of Mulayam Singh Yadav intact. After filing his nomination, Baghel said that the blessings of Neta ji are with him and that he will win the seat. Taking a dig at Akhilesh, Baghel said, ”The son usurped all powers.”

When Mulayam refused to give Baghel the 2009 Lok Sabha ticket from Firozabad, and chose his son Akhilesh instead, Baghel switched to the BSP and fought against Akhilesh. He lost by around 67,000 votes. Soon after, he was sent to the Rajya Sabha from BSP and made the National General Secretary of the party.

The bitter pill Baghel swallowed from the hands of Akhilesh in 2009 stayed with him till 2014. To avenge his loss, Baghel joined the BJP ahead of the 2014 Lok Sabha elections, when the entire nation was engulfed by the Modi wave. He fought on a BJP ticket from Firozabad; this time against Akhilesh Yadav’s cousin Akshay Yadav, son of SP leader Ram Gopal Yadav. This time, Baghel lost by a margin of a lakh votes. Firozabad again went to SP.

In 2019, however, BJP’s Chandrasen Jadon won the seat.

In 2015, Baghel switched to the BJP and became the President of OBC Morcha of the party. Baghel comes from the Gaderia backward caste from Dhankar community. BJP used his influence in UP to strengthen the OBC vote bank.

In 2017 UP Assembly elections, he contested from the Tundla constitutency, an SC seat. He won the seat and was inducted in the cabinet by Yogi Adityanath. He was given the department of Animal Husbandry, Fisheries, Minor Irrigation and Underground Water.

In 2019, he vacated his post and contested for 2019 Lok Sabha elections from a reserved seat in Agra. He won the seat and was inducted into the Cabinet by PM Narendra Modi. He got the MoS of Law and Justice portfolio. 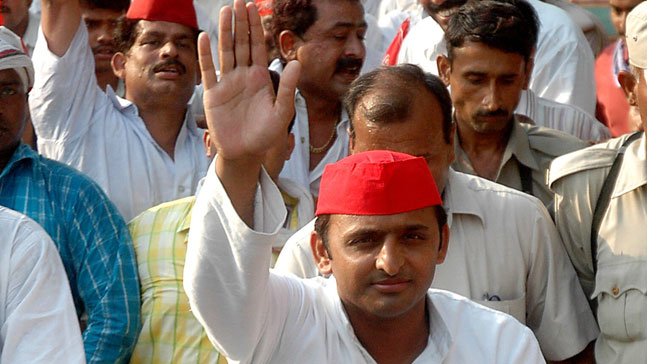 BJP put forth its strong OBC player against Akhilesh, who also happens to be an OBC leader. In Karhal constituency, which goes into polling in the third phase, the OBC vote accompanied by a substantial SC vote might make things difficult for the SP leader. With this, Baghel also gets to avenge his previous two defeats at the hands of SP.

Akhilesh on the other hand has said that there is no need for him to go to Karhal for campaigning. He said that he has left it to the party workers to campaign for him as he is assured of his victory.

Akhilesh Yadav said, "People of Mainpuri have decided to defeat BJP by a huge margin to end its negative politics. This is the karam sthali of Netaji and he has always maintained warm relations with Mainpuri."