India's pushed Kashmir to no return: If Karan Singh can have his view, why can't Shah Faesal?

After the arbitrary move to abrogate Article 370, the govt has arrested Kashmiri leaders like Shah Faesal and placed choking restrictions on the Valley. Kashmir is an open-air prison now.

I heard just recently that my fellow Kashmiri leader, Dr Shah Faesal, has been detained by the state. I’m not entirely clear on the details as yet. I think Shah Faesal was travelling from Delhi to Boston; maybe he was taking a flight via Istanbul as there have been suggestions of his trying to go to Turkey. I don’t know under what circumstances he wanted to leave the country. His family would be better placed to comment on that.

I had been in touch with Faesal though; we were actively working together on the Supreme Court petition, challenging the government on the abrogation of Article 370.

I am not aware of why he wanted to leave the country now or where exactly he was going.

But what I do know is that it is illegal for the government of India to stop somebody from boarding a plane — unless they are wanted in a crime. 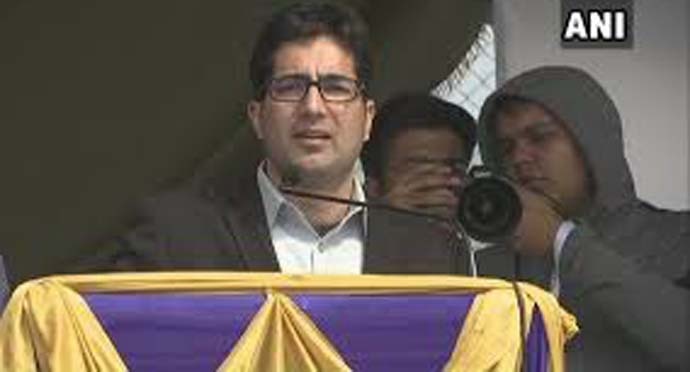 Where exactly is he? No one knows the exact whereabouts of Shah Faesal. (Photo: ANI)

To my mind, this is a murder of democracy where the ruling party wants to put the opposition under house arrest and detention.

How can the BJP alone decide what is good for the people? They don’t even have any representation in Kashmir and they are simply jailing all the opposition leaders who represent the people. This is not acceptable.

The ruling party should have enough confidence that their decisions would be held up by the Constitution. Instead, the BJP is ruling the state by force right now. Entire Kashmir is under curfew. If we go by some ground reports which have been filed by a fact-finding team recently, the conditions there certainly don’t look good.

All of Kashmir is in jail right now.

The authorities, some reports say, are even jailing children of class seven — this is not normal. Not anywhere, not by any standards.

Ali Saifuddin, a Kashmiri singer, had to come all the way to Delhi in order to purchase essential medicine for his grandmother. People who have come from there, I have asked them, are you able to find, say, baby food? They are saying, we are able to get it but with great difficulty.

This is the situation with baby food — the most basic and vital of nourishment. Can you imagine how difficult such a life must be?

The normal lives of people have been entirely disrupted. And we're still talking about urban Kashmir. We don’t even know the situation in the villages or what is happening there.

China has now asked the UN Security Council to take up the issue of Kashmir — I feel it’s the right thing they have done. If India cannot put its own house in order, take its citizens on board, then international parties are going to step in. Human rights are not an internal matter — when something happens in Pakistan or Balochistan, India speaks.

India has supported Bangladesh during the Bangladesh war. The Tibetan government in exile runs from India. If India is not going to respect human rights itself, then other parties are going to exploit that situation too. I don’t think we should be too surprised about that.

India has certainly pushed Kashmir to a point of no return.

Things can be reversed — but the government has shown no will to reverse the decision.

We are moving the Supreme Court, we have faith in the SC. If they go by the Constitution, then this decision has to be overturned. This was, as many see it, unconstitutional, undemocratic and unethical. The SC is our last hope to save anything in Kashmir — otherwise it’s gone.

There will be zero per cent voting there if elections were to happen now. A daily sight: Kashmiris are going through unimaginable hardships for getting just the basics. (Photo: AP)

Any leader who can mobilise people has been put behind bars or is in detention. All these leaders should have been allowed to lead peaceful movements against the government’s decision. This is what democracy means.

I can say that now, there will be anarchy.

If Dr Karan Singh is allowed to have his opinion on Kashmir, then Dr Shah Faesal should also be allowed to do the same.

The travesty is that Shah Faesal is jailed for his opinion, whereas Karan Singh can have his, which is widely quoted and celebrated — and that fact is entirely unfair.

Also read: My J&K Diary: What I heard when I listened to voices getting drowned in the liberals' clamour

#Constitution, #Article 370, #Shah faesal, #Kashmir
The views and opinions expressed in this article are those of the authors and do not necessarily reflect the official policy or position of DailyO.in or the India Today Group. The writers are solely responsible for any claims arising out of the contents of this article.