How India can pay the perfect tribute to Shaktiman

We must ask the government to increase the penalties in the Prevention of Cruelty to Animals Act.

The horse. Galloping hooves that keep time with some ancient undercurrent. A gleaming coat that bears the kaleidoscopic patterns of raw sinew and bone in rhythmic motion. A beautiful tail that dances to the tune of speed and a mane that rides the wind.

This is the enduring image many of us have of this noble animal. That is until recently, when the public spectacle of a healthy mare reduced to a kicking, whimpering heap of blood and broken bone, shocked us.

Following the public assault on Shaktiman, a horse is now the symbol of our shame and apathy. 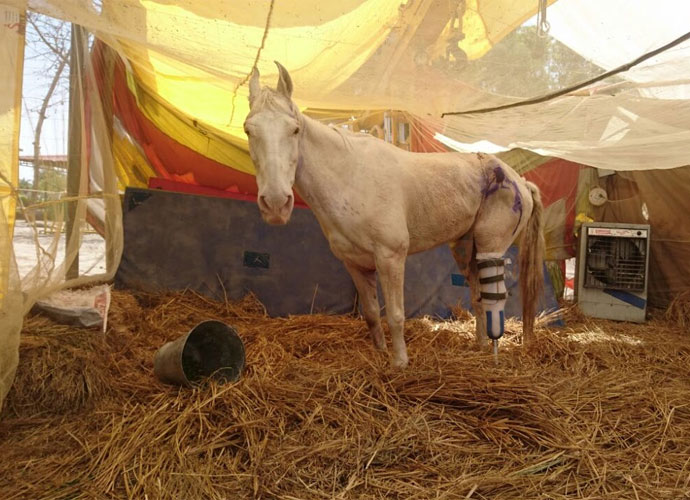 Shaktiman's injury galvanised a nation to tears and rage.

The events leading to Shaktiman's injury and death have been replayed ad nauseum, with every side claiming innocence. But can any of us really claim innocence when in the midst of our human conflict we so senselessly claim the life of an animal?

Shaktiman's injury galvanised a nation to tears and rage. We waited anxiously as veterinarians assessed the damage to her leg. We heaved a sigh of relief at her recovery, albeit on three legs. We cheered her as she learned to hobble and then walk. And then we wept unabashedly when one day, Shaktiman rose no more.

In the aftermath of her death, we called her a martyr, lauded her sacrifice, and hashtagged her death. Unfortunately, her end also symbolised the sacrifice of compassion at the altar of speciesism with arrogance as the executioner.

While we focus attention on the animals that have been wronged, we must not forget the people responsible for their pathetic plight. If we consider the impunity of this deed where a person threatened a horse, we can't help but wonder if they did so because she was "just an animal".

Therefore, the spotlight should, in fact, shine bright on the lead actors in this theatre of horror because the animals are only bit players; a mere consequence of the nadir of degeneracy that the human heart can fall to. These acts of brutality aren't only about Shaktiman.

For the truth is that these acts of brutality aren't only about Shaktiman or any of the thousands of animals who suffer at the hands of human beings. They aren't only about the dog who had firecrackers tied to his tail, the monkey who died after acid was thrown on him or the cow that was forced into an act of bestiality with a man.

They are about the darker places in ourselves, the ones we don't often confront.

In 1960, animal activist and danseuse Rukmini Devi Arundale, a Rajya Sabha MP, introduced the Prevention of Cruelty to Animals Bill that became law. This law, now known as the PCA Act, aims to prevent the unnecessary suffering of animals.

It lists certain penalties for various offences and acts of cruelty towards animals, including Section 11, which states that causing wilful harm to an animal is a punishable offence and can result in a fine of Rs 50 or imprisonment for a period of five years or both.

Where one's morality doesn't serve as a deterrent, it is hoped that the fear of the law will.

But what is to be feared when these laws haven't been amended for decades despite increasing acts of abuse against animals? And with the rate of conviction so low, can we really expect it to function as a preventive measure?

According to data provided by the Animal Welfare Board of India, between 2014 -2015, only 794 convictions were made in cases of animal cruelty across the country, when in fact, 1126 cases were reported.

One of the reasons we cannot afford to ignore animal abuse is the fact that there is strong proof of a link between animal cruelty and violence towards humans.

In Understanding the Link between Violence to Animals and People: A Guidebook for Criminal Justice Professionals, author Allie Phillips suggests that the presence of animal cruelty is an indicator of the occurrence of two or more types of "intra-familial abuse" which include various forms of child abuse, domestic violence, elder abuse and animal abuse.

A publication by the National Link Coalition points to research that suggests that exposure to animal abuse at a young age affects the development of the brain, resulting in "long term hyper response to perceived threats" which affects physical and psychological development. Following the public assault on Shaktiman, a horse is now the symbol of our shame and apathy.

This too makes animal abuse a sentinel of violent potential toward other human beings.

In the light of all this, we must realise that while rhetoric about Shaktiman makes for strong sentiment, it also takes away from the fact that the animals that we abuse and torture are sentient, sensitive living beings and that alone should be enough to demand better enforcement measures as well as stricter penalty provisions.

Whether it concerns Shaktiman or any other animal, when all is said and done, it's not enough to be outraged, it's not enough to cry. What we need to do is to demand and ensure that the government upholds the Constitution and protects animals by increasing the penalties in the Prevention of Cruelty to Animals Act..

As a tribute to Shaktiman and countless other animals that have suffered at human hands, NGOs like Humane Society International/India and People for Animals came together to launch the campaign, "#Nomore50" which seeks a revision in the penalties of the PCA Act.

Likewise, ordinary citizens like us can keep up the fight for animals by urging the government to amend the law so that it can serve as an effective deterrent against crimes that target animals.

Because indifference to injustice is the worst crime of all.

Post your comment
#Animal Rights, #Cruelty To Animals, #Shaktiman
The views and opinions expressed in this article are those of the authors and do not necessarily reflect the official policy or position of DailyO.in or the India Today Group. The writers are solely responsible for any claims arising out of the contents of this article.

The author is a writer with HSI/India. Her interests include wildlife and forests, animal welfare, travel, books, food and music.