How Sharad Pawar put Shiv Sena in a spot

The NCP chief has put his alliance partner Shiv Sena in an awkward position when he questioned the urgency of constructing the Lord Ram temple in Ayodhya.

The Nationalist Congress Party (NCP) chief Sharad Pawar put his alliance partner Shiv Sena in an awkward position on Sunday when he questioned the urgency of constructing the Lord Ram temple in Ayodhya. “Eradication of Covid-19 is the priority of the Maharashtra government but some people think constructing a temple will help in its mitigation,” Pawar said while interacting with reporters in Solapur. He suggested that the government focus on reviving the economy instead of the temple. 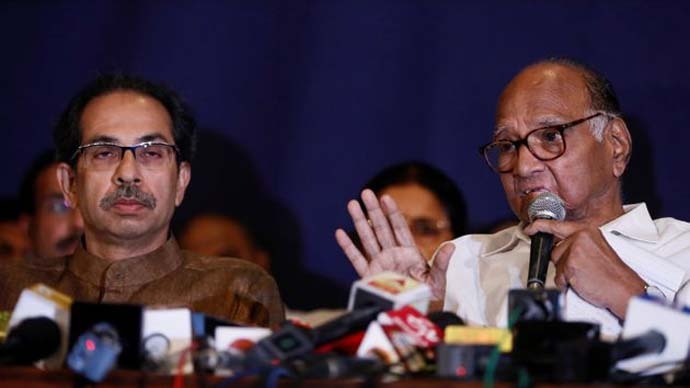 His comment was significant amid the backdrop of Prime Minister Narendra Modi’s decision to lay the foundation stone of the temple in Ayodhya on August 5 on the invitation of Shri Ram Janmabhooomi Teertha Kshetra Trust. While Pawar’s opposition to the temple is not new, his stand pushed the Shiv Sena, which has been advocating the urgency of constructing the temple, a step back. On Monday afternoon, Shiv Sena leader Sanjay Raut announced that CM Uddhav Thackeray will also visit Ayodhya on August 5. “The Shiv Sena removed the roadblocks in the construction of Lord Ram temple. Uddhav Thackeray does not need an invitation to go to Ayodhya,” he said. The Shiv Sena’s stand saved Thackeray from embarrassment and provided the party with a chance to remain relevant on the Hindutva matters. Thackeray claims that the Union government expedited the legal case in the Supreme Court only after he visited Ayodhya in November 2018.

Pawar’s jibe towards Modi has come a fortnight after he praised the Prime Minister on his stand on the Galwan valley standoff with China. Political analysts believe that Pawar’s ‘good cop, bad cop’ game with Modi is a part of his style of uncertain politics. On the China issue, he sent out a message to the Congress that he should not be taken for granted. Now, he is trying to occupy the secular space questioning the construction of the Ram temple. Pawar had said in the recent past that the Muslim community will choose governments henceforth. He had analysed that the BJP couldn’t form the government in Maharashtra despite being the single largest party because Muslims ditched the party. His main worry is the NCP has so far failed in wooing the Muslims in spite of his repeated attempts. The Ram temple has given him another opportunity to get closer to the community.

Also read: Why Sharad Pawar is a politician obsessed with staying in power