Step towards Sharda Peeth: Pakistan's proposal for a corridor to the famed temple breaks the ice in Kashmir rhetoric

All leaders in Kashmir have welcomed the move to open a corridor to Sharada Peeth. Such a step could hold significance for both nations and for worshippers who once visited this temple for pilgrimage.

Amidst the gloom that has marked the national debate on Kashmir since the Pulwama attack on February 14, Pakistan’s proposal to establish a corridor — that will allow Hindu pilgrims from India to visit Sharada Peeth in Pak-Administered Kashmir — is a hugely welcome step.

Both mainstream and separatist leaders in Kashmir have welcomed the move to open a corridor to Sharada Peeth. Omar Abdullah tweeted that while this was a welcome announcement, the Pakistan government should also open the Kargil-Skardu road and other routes to facilitate greater people to people contact.

After the welcome announcement to open the Sharada Peeth corridor to religious pilgrims by @ImranKhanPTI we hope the government in Pakistan will only announce the Kargil-Skardu road as also other routes to facilitate greater people to people contact.

Sharada Peeth Corridor: A welcome step in the strained bilateral relations between the neighbours. (Photo: Reuters)

Former J&K chief minister Mehbooba Mufti said in a tweet at an initiative like this, at a time when Indo-Pak tensions are at an all-time high, could help navigate the current impasse.

Not too long ago I had written to PM imploring GoI to reopen Sharada Peeth, a temple across LoC for Kash Pandits. An initiative like this at a time when Indo - Pak tensions are at an all time high could help navigate the current impasse. https://t.co/IYRyQ8v5U3

Meanwhile, the Hurriyat Conference (M) chairman Mirwaiz Umar Farooq said media reports about a positive movement between India and Pakistan on the opening of Sharada Peeth temple were a welcome sign.

Media reports about positive movement between India and Pakistan on opening of Sharada Peeth temple,is a welcome sign. During Hurriyat’s last visit to Pakistan we had also urged the Govt there to facilitate the pilgrimage as it was a deep longing of our Kashmiri pandith community

People-to-people contact helps in demystifying myths about a people or community. Such interactions also enable exchanges of culture, and have the potential to enhance peace or progress.

Sharada Peeth translates to 'the seat of Sharada' — the Kashmiri name for the Hindu goddess Saraswati. Sharada Peeth is an ancient Hindu temple, once a great centre of learning in the area that is now Pakistani-administered Kashmir. The temple is dedicated to the Hindu goddess of learning and knowledge and occupies a hallowed place in the pantheon. 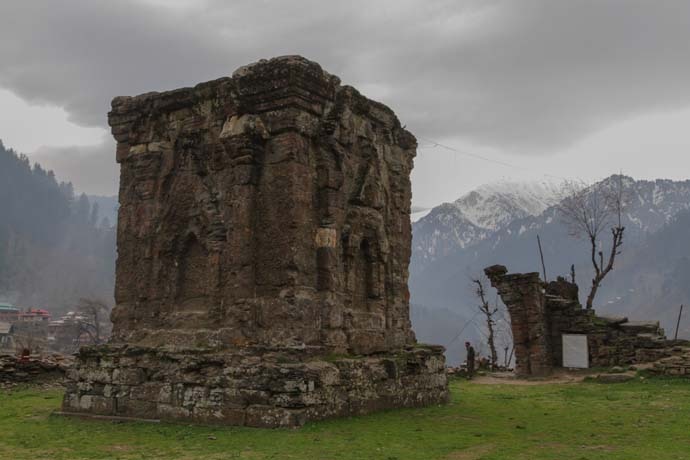 Sharada Peeth: The ancient Hindu temple, visiting which was once a pilgrimage for Pandits. This is now in Pakistani Kashmir. (Source: Wikimedia Commons)

Between the 6th and 12th centuries CE, Sharada Peeth was one of the foremost temple universities of the Indian subcontinent, hosting scholars such as Kalhana, Adi Shankara, Vairotsana, Kumarajiva and Thonmi Sambhota.

As a religious institution, it is one of the three famous tirthas or holy sites for Kashmiri Pandits — the other two being the Martand Sun Temple and the Amarnath Temple. Sharada Peeth is one of 18 Maha Shakti Peethas or "Grand Shakti Peethas" — highly revered temples in South Asia that commemorate the location as per the legend of the fallen body parts of the Hindu deity Sati.

The opening of a corridor to Sharada Peeth has been a long-standing demand of the Kashmiri Pandit community — the move has been welcomed by them.

The yatra to Sharada Peeth had been an annual pilgrimage for Kashmiri Pandits since ancient times. During the Dogra rule after 1846, the yatra became a regular feature. The devotees would trek hundreds of kilometres to have a darshan of Devi Sharada and offer their obeisance to their ancestors (Pitras). A Buddhist university existed near the temple which was established by Emperor Ashoka in 273 BCE.

The Sharada script was invented at this university by scholars, as an amalgamation of local dialects.

It remains to be seen whether access to this extraordinary site becomes a reality any time soon. But even a first step in this direction is a welcome one.

Also read: Amarnath pilgrims urinating in Dal Lake has outraged Kashmiris, but it has also made them introspect

#Pakistan, #Azad kashmir, #Kashmiri Pandit, #Kartarpur sahib gurdwara corridor
The views and opinions expressed in this article are those of the authors and do not necessarily reflect the official policy or position of DailyO.in or the India Today Group. The writers are solely responsible for any claims arising out of the contents of this article.