The BJP is blasting Shashi Tharoor over 'Hindu Pakistan' remark, but why has the Congress abandoned him?

The party should have used his remarks to attack the BJP’s ideology.

Congress leader Shashi Tharoor is in the eye of a storm, yet again. A couple of days ago, while delivering a lecture on “Threats Faced by Indian Democracy and Secularism” in Thiruvananthapuram, Tharoor expressed apprehension that the BJP could tear up our Constitution and replace it with one that enshrines the principles of the “Hindu Rashtra”, that would pave the way for the creation of a “Hindu Pakistan”.

While this is a genuine fear shared by a lot of liberal and decent people in the country along with the minority communities, the BJP has taken offence to the term “Hindu Pakistan”, and proceeded to distort it as an affront to Hindus — with some assistance from propaganda channels. Not just his headache: What Tharoor said is a genuine fear shared by a lot of liberal and decent people in the country. (Photo: PTI/file)

What has come as a greater surprise is the reaction from the Congress itself — the party chose to distance itself from the comment and “cautioned” Tharoor “while urging to exercise restraint”. But Tharoor has stood his ground and flatly refused to retract his statement.

In fact, Tharoor had made similar comments during the Jaipur literature fest in January this year, where he went on to say, “We are living in a country where on the one hand the Prime Minister says the Constitution is his holy book and on the other hand, he extols as a hero and instructs his Ministers to study the works, writings and teachings of Deen Dayal Upadhyaya, who explicitly rejects the Constitution.”

Dr Tharoor’s opinions have also been shared by many writers and intellectuals as the country’s social cohesion has increasingly come under threat in the last four years of the Modi rule.

“The only thing that had stood in its way is a two-third majority in the Rajya Sabha,” Tharoor had emphasised at the lecture — which is true in many ways. It is not long ago Anant Kumar Hegde, a Cabinet Minister in Narendra Modi’s government, claimed they would “soon change the Constitution”.

Tripura Governor Tathagatha Roy too made a similar statement the other day when he stated that “what was accepted in 1950 can be changed now”.

So have Sangh ideologues like Govindacharya and many other loudmouths. But most of the BJP leaders publicly disown such statements even as they chart their plans surreptitiously to make it into a reality.

BJP’s official ideology is “Integral humanism”, formulated by Deendayal Upadhyaya in 1965. The party expresses commitment to Hindutva, a term coined by VD Savarkar. Alternately, the party refers to Hindutva as Bharteeyata — as Upadhyaya preferred.

Now, Tharoor has clarified that he would retract his statement if the BJP officially made it clear that they had abandoned the Hindu Rashtra project, conceived by the likes of Savarkar and Golwalkar and carried forward by Upadhyaya.

The Hindu Rashtra concept was first formulated by Savarkar in 1923 in the essay titled “Hindutva”. It was officially adopted by the Hindu Mahasabha in 1937, when they passed a resolution favouring the two-nation theory (even before the Muslim League and Jinnah passed their own resolution in Lahore in 1939). MS Golwalkar, who was the RSS chief from 1940 till his death in 1973, carried the idea forward in his “We, or our nationhood defined”, that took it to the extreme by extolling Nazi Germany and the purity of race.

Later, in the aftermath of Savarkar’s loss of image post Gandhi’s murder and upon realising the gravity of the explicitly-worded doctrines in Golwalkar’s thesis, the Jan Sangh, that replaced Hindu Mahasabha as the political wing of the RSS, found their champion in Deen Dayal Upadhyaya. Upadhyaya was very much inspired by Golwalkar, whom he first met as a 21-year old in 1937, but was more moderate in his language and less controversial.

Despite his relative moderation, Upadhyaya’s speeches and writings embodied anti-Muslim hatred, even as he vehemently opposed the Indian Constitution for what he saw as “not reflecting the characteristic features of the ethos of Bharat”.

With BJP using its governance and propaganda machinery to try and place him in the pantheon of India’s greats, Tharoor’s comments come as a significant ideological poser to the Idea of India envisioned by Prime Minister Narendra Modi with his oft-repeated “New India” slogan.

One should also recall the BJP’s deification of Upadhyaya in the past four years, culminating in the year-long birth centenary celebrations last year.

Despite claiming that the Constitution is his holy book, Modi keeps championing Upadhyaya, whose Integral Humanism is a treatise against the Indian Constitution. It is precisely this doublespeak that the intellectual in Shashi Tharoor wants to expose the BJP for.

In fact, Modi went to the extent of repeating Upadhyaya’s problematic theory of Muslim “purification” at the BJP National Council meeting in Kozhikode in 2015. (Upadhyaya’s theory of “purification” is itself a moderate version of Golwalkar’s racist doctrines in “We, or our nationhood defined”)

By not supporting Tharoor in his endeavour to expose the BJP’s classic doublespeak, the grand old party seems to have virtually given up on their ideological battle with the BJP. The reasoning that the BJP could take advantage of such a debate to polarise the electorate seems petulant and betrays massive incompetence. 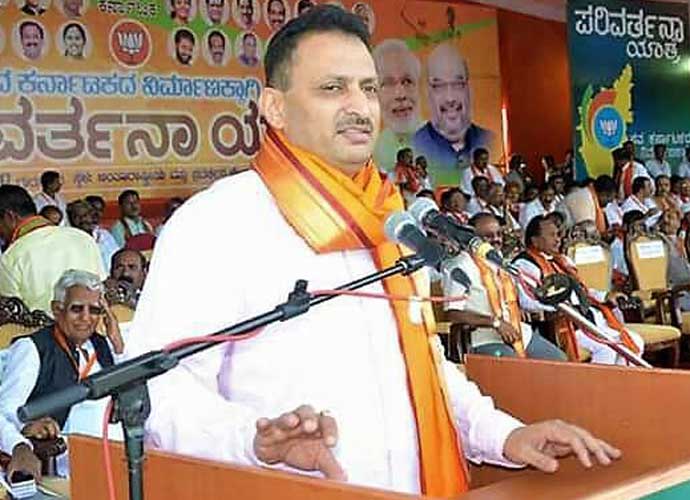 While it is necessary to highlight the gaps in the promises and delivery of the BJP government as Modi seeks another mandate next year, the reclamation of the Idea of India should ideally go hand in hand with it.

With Congress coming under increasing criticism for not professing any “ideology” anymore as the critics see it, this was a golden opportunity for the party to set the narrative and put the BJP on the backfoot.

Granted, the BJP and their assets in the media have made it a daunting task for the Congress to get ahead of the curve. But that’s where the party has to show more dexterity and flexibility.

It is unfortunate that the Congress has yet again left Tharoor to fend for himself, when they could have easily converted his remarks into an advantage of sorts. It would be natural for Tharoor to feel aggrieved and let down by his party in spite of all his contributions and standing as a public intellectual and writer.

One wonders if the sycophantic party machinery would have reacted similarly if a similar statement (or any faux pas) had been made by Rahul Gandhi. But then, to quote George Orwell, “All animals are equal, but some animals more equal than others.”