Now that Shehla Rashid Shora, a student at the Jawaharlal Nehru University and former vice-president of its students union, has said her piece on the murder of journalist-activist Gauri Lankesh at a rather well-attended press conference at the Press Club in Delhi, the rest of the war is being fought on - where else - the social media.

The most important debate at the moment is whether it was right for Shehla to demand that a certain journalist from a certain media house be thrown out from her press meet. The journalist in question was Snehesh Philip from Republic TV. Philip had a few days ago questioned the murder investigation and to quote him, called it "pathetic".

Shehla went on to accuse Republic TV of trying to cover up the murder of Gauri Lankesh while spewing vitriol on several other journalists and naming a few for turning several other murders into BJP/RSS cover-ups. In her words, Republic TV has deliberately been covering up such reports with a political agenda because "they are BJP and RSS stooges".

The young girl made a calculated move while choosing the channel that she wanted "thrown out" even as she spoke right into their camera. After all, thanks to Arnab Goswami's style of journalism that appeals to emotions, hysterical reaction would have been a natural outcome. But Arnab Goswami and his crew kept their cool moving on to other important matters at hand. Shehla's controversy will live the 15-minute shelf life contained within 140 characters.

If you look at it closely, it is neither a debate on free speech nor is it about political murders. If it were, all this drama would make sense. Shehla Rashid is symptomatic of the how our political system has devolved over the years. 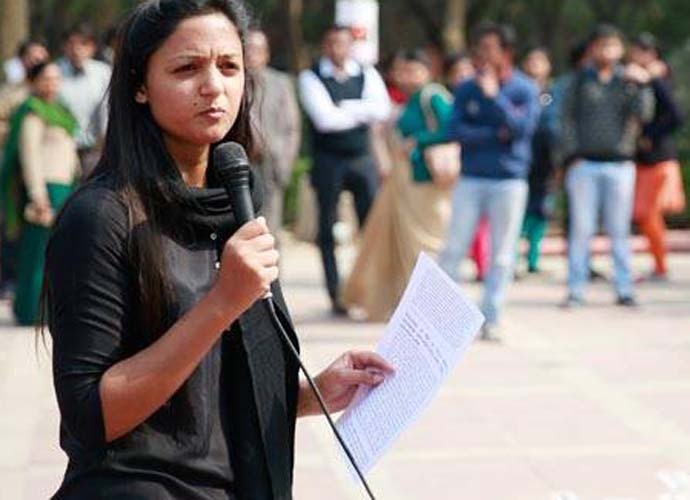 Simply put, Shehla was out to make a statement. She did.

Our politicians have behaved exactly how Shehla has. They choose what information reaches whom and where and through which medium. Take our Prime Minister Narendra Modi for example, when was the last time you saw/heard him explain his various policies and work agenda to the people who voted for him.

To borrow a line from Arnab, "yes, Mr Modi the nation wants to know." Instead, Modi chooses to keep his grand ideas to himself be it on demonisation or GST. Even a routine cabinet reshuffle is a secret.

When he did indeed decide to indulge the media, Modi chose to give an "exclusive" interview to the more docile Rahul Joshi, editor of CNN News 18, a rather safe bet compared to the more aggressive among the lot. And they spoke a lot on economics.

And if you are the news channel variety, you would have noticed the number of times various spokespersons of political parties have thrown in the towel literally and walked away from a debate when they are cornered for answers. The last one was a lackey from the Haryana BJP cadre who was asked to explain the failure to contain violence after Gurmeet Ram Rahim's sentencing.

It is not just an Indian phenomenon.

We have global precedence. US president Donald Trump expressed his fury at the media in no mild words. Trump has gone one step ahead in saying that the press overall was a "disgrace, false, horrible, out of control". He says reporters are "very dishonest people".

In case the message wasn't clear enough, Trump, who was merely a presidential candidate then, asked Univision journalist Jorge Ramos to de-board his aircraft telling him to "go back to Univision". When Ramos came to one of his press conference and asked him about the Mexican-US diplomacy, Trump's prompt reply was, "Sit down, you weren't called." Stephen Bannon is to Trump what in a way Amit Shah is to Modi, who furthered the cause saying the media must be "embarrassed and humiliated and keep its mouth shut and just listen for a while".

The generation that is growing up consuming such intolerance and disrespect for the fourth estate will naturally sprout Shehlas. Of course, there will be people who will argue that it was freedom of speech and choice. I agree. So yes, Shehla has every right to call a press conference and question the government.

Simply put, Shehla was out to make a statement. She did. Now let us leave it at that. There is an important issue that needs debating: The wall that is being built between the political class and the media.

Also read: How interpretation of the word maula caused the Shia-Sunni schism