Why Shimla can never be Shyamala

Since Gurgaon has made the transition to Gurugram, the VHP wants the capital of Himachal to get a new name.

Since Gurgaon has made the transition to Gurugram, it has now been suggested by the VHP that some other alterations take place - notably calling the capital of Himachal Pradesh Shyamla. Love songs in pahadi are as often about the love of a place as of a woman. So to begin with, renaming Shimla Shyamla might cause endless confusion about which of the two is being eulogised. It would also require re-rhyming all those pahadi songs that evoke the Shimla Ridge maidan or Neeru walking to Shimla bazaar with crisp notes in her purse.

Then there is the certain objection that will be raised by capsicum lovers when they have to buy and cook Shyamla mirch concoctions. Naturally, we would also have New Shyamla and Chotta (Chotti?) Shyamala; the latter is where I live so I would be grateful if someone could clarify the gendering.

Renaming Shimla could also lead to replacing Crainagh, Knockdrin, Elysium and other vestiges of the Raj with uninspiring options such as Vikas Nagar, New Bus Stand or Pari Mahal. Or worse, they could be named after politicians, changing every five years along with the government in this anti-incumbency state. 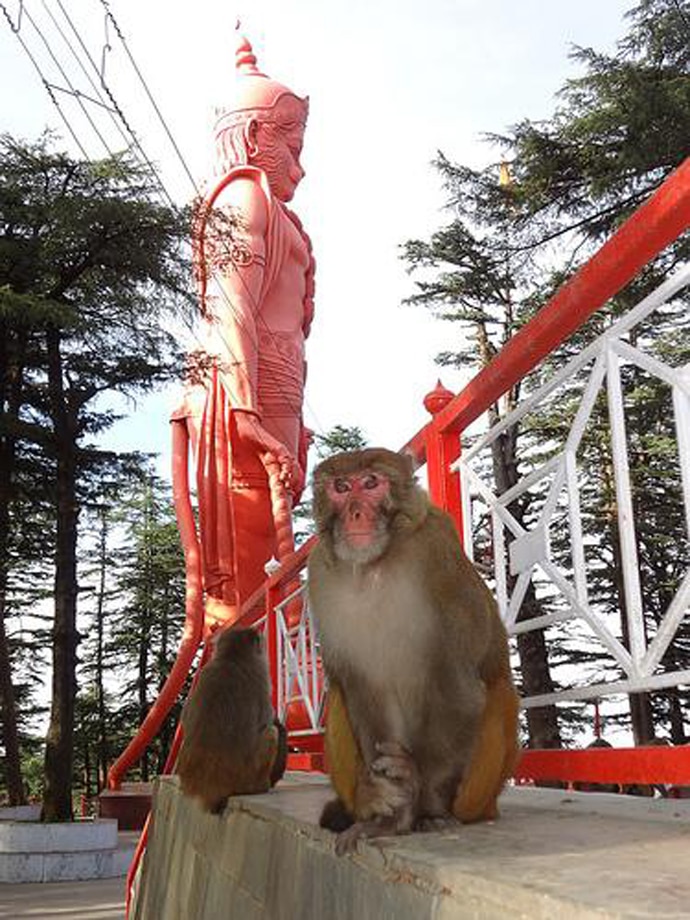 One theory suggests the British named Shimla after a temple to Shyamla Mata that once stood near Jakhu (or Jakko!) Hill (above).

There are a few theories in books (those amazingly detailed British gazetteers left little undocumented in Himachal and ironically neo-nationalists would probably need to turn to these in their propagation of "authentic" place names) and on the internet about how Shimla got its name. Of these the most commonly accepted seems to be that the British named it after a temple to Shyamla Mata which once stood near Jakhu (or Jakko!) Hill.

But if you ask the average inhabitant of Shimla about it, and I asked quite a few, no one has ever heard of it - indeed it hasn't existed for well over a century. When the British first came to Shimla, all that existed here were a few huts, and according to some sources, a lone shepherd.

The erstwhile Shyamla Mata temple holds no place in the living culture of the city today. Instead what you have are the vestiges of the British town, existing happily in the midst of the mess of neon-painted, post-independence-era construction. For its current inhabitants, the transition between British Simla and modern-day Shimla is not one that spells disenfranchisement, it is what makes them proud, and their city unique. Yes, the British were here. And in Shimla they left behind some of what was best of their long rule of the subcontinent.

The engineering marvel that is the Kalka-Shimla railway line, the magnificent Viceregal Lodge with its glowering gargoyles, and the beating of heart of this city, the Mall Road, where every evening the denizens of Shimla can be seen greeting, meeting, shopping and eating in a car-free, hence honk-free environment - right in the heart of the city.

The Gaiety Theatre, immaculately restored with funding from the central government's department of culture and tourism, is the reason why this city of around two lakh people can host an Ismat Chughtai play starring and directed by Naseeruddin Shah and host Pandits Hariprasad Chaurasia and Channulal Mishra, alongside numerous local amateur productions.

The British buildings of Shimla - a diverse and wonderful mix of Tudor, Elizabethan and neo-gothic - have been immortalized in Bollywood movies and probably play a large part in the booming tourist industry of the city. The more historically minded tourist come for the historically crucial events that took place here - whether you like them or not - the Shimla Accord of 1914 and the Shimla Conference of 1945. These are key events in the history of our nation, and they took place right here, on that very table in the Viceregal Lodge. Changing the name of Shimla would be a futile effort to erase all that history.

Here's the thing, the process of expansion and renaming has been going on in an organic manner in all the 71 years since the British signed the Shyamla agreement and departed. But no one previously has sought to erase the British from Shimla's history.When new buildings and colonies were erected, they were identified by their proximity to British bungalows and landmarks, like Oak over (the chief minister's official residence), Peterhoff, Auckland house, and Bishop Cotton School.

Many names have faded as the buildings or their prominence have worn away. Bantony Castle, Blairethol, Crowborogh and Walsingham are names that are being slowly relegated to the dust heap, as are lovely names like Beolia (after the beol tree) and Engine Ghar (after the quaint colonial-era fire engines and the ghar that they are parked in).

Then there is Rook's Nest Estate - a cluster of houses old and new. Of the old houses, the one abutting the road had a wooden fish on the roof where one might expect to see a wind vane. Given the whimsy of this, and the desi difficulty in enunciating "Rook's", the cluster became known as machchi wali kothi. This is a name to root for.

If it makes people happy to change the names of their town - so be it. But here in the hills, we call this place Shimla, our songs sing Shimla (or rather Sheemala with a lilt) and I haven't heard anyone previously even mention the word Shyamla. And if we must discard every name associated with the British, let us replace them with names that reflect Shimla's present.

Names that reflect the diminishing yet significant tree cover dominated by the awe-inspiring, roof-smashing Deodars (Dayaar or Kelo in pahadi). We could name the points at which two full-sized buses can pass along Shimla's narrow and built up roads. A hundred hand-pumps tucked away from sight and frequented by mysterious booze-bottle dropping aliens are crying out to be named. Or we could come up with a name for the town that reflects the overall feeling locals have, that Shimla and the world are going to pot - but there are many places worse than here.

#Gurgaon, #Shyamla Mata, #Gurugram, #Shimla
The views and opinions expressed in this article are those of the authors and do not necessarily reflect the official policy or position of DailyO.in or the India Today Group. The writers are solely responsible for any claims arising out of the contents of this article.

The writer is an art historian turned school teacher in Shimla.