Will Uddhav Thackeray patch up with the BJP?

The Shiv Sena chief is savouring the moment, but will definitely demand his pound of flesh in the near future.

Uddhav Thackeray must indeed be a happy man today. BJP president Amit Shah’s visit to his residence, Matoshree, has become a political football.

For the past four years, whether it was privately or publicly, the BJP spared no opportunity to insult him. During election time, there was mud-slinging from both sides. But in the light of the BJP’s by-poll debacle, the equation appears to have changed. The BJP needs the support of the allies more than the allies need the Modi-Shah duo. And thus, Amit Shah has pirouetted to the "coalition dharma" strategy yet again. He plans to meet all top leaders of the NDA.

The BJP may have won the Palghar Lok Sabha by-poll in Maharashtra, but the Shiv Sena was quite indomitable having put up a valiant fight. Considering that this was a traditional BJP seat and the Shiv Sena was fighting this election for first time in 25 years, its performance was admirable. The Shiv Sena got more than 2.5 lakh votes while the BJP won by a narrow margin of 30,000 votes. In the 2004 Lok Sabha polls, the BJP’s margin of victory here was more than 1.5 lakhs. Uddhav Thackeray drew attention to this during the post-poll press conference and once again announced the Shiv Sena’s resolve to fight all future elections, independently.

It was against this background that Amit Shah sought Uddhav’s audience. As expected, Uddhav Thackeray obliged the BJP president. However, Uddhav set the terms for the meeting. Today, the BJP is floundering and, therefore, desperate about its alliance with the Shiv Sena. So much so that senior leader Nitin Gadkari even publicly acknowledged this. Prior to the Matoshree visit, Amit Shah made an announcement during a TV interview that both parties would fight future elections together. The Shiv Sena though refused to comment on it.

Uddhav demanded a one-on-one meeting with Shah and the BJP agreed. The tête-à-tête was arranged at Matoshree. The state BJP president was not invited. Maharashtra chief minister Devendra Fadnavis did accompany Amit Shah to Matoshree but was asked to abnegate from attending the meeting. Both Shah and Thackeray did not address the media after their meeting. But sources within the BJP informed journalists that the outcome of the meeting was extremely positive. The Sena refused to confirm. 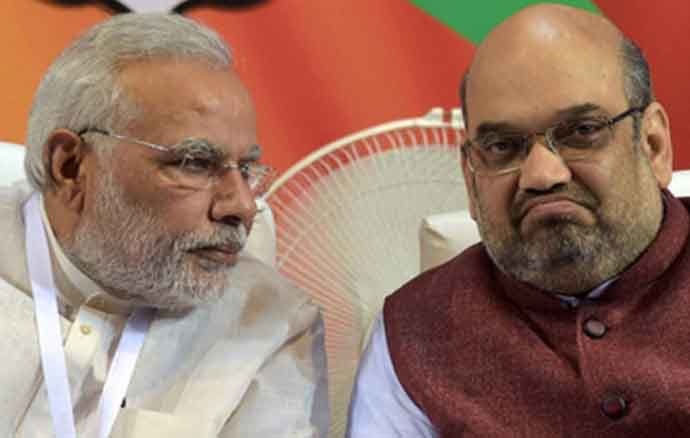 Tables have turned: The BJP needs the support of the allies more than the allies need the Modi-Shah duo.

Uddhav Thackeray is in an enviable position today. On the one hand, the BJP is beseeching him for an alliance for future elections and on the other, Sharad Pawar has invited him to join the Opposition alliance. The Sena stands to benefit either way with the proverbial "Dono haath mein laddoo hai".

Before arriving at any final decision, Uddhav has to iron out the differences within his party. A group of senior Sena ministers and MPs, approbates the alliance with the BJP while grassroots leaders are against it. The Sena has been performing a double role in this alliance for the past four years. It is implicit in the alliance at the Mantralaya, but on the ground, it works as an Opposition party. Maharashtra has seen the BJP and Sena leaders in a head-on tussle in various constituencies. Shiv Sainiks are fed up of this situation.

If Uddhav decides to march to his own beat and go alone, it will hurt both the parties. In the 2014 Lok Sabha polls, the BJP and Sena together won 42 seats. Today, in the absence of any wave, it is difficult to repeat this performance. Division of votes between the two parties, will directly benefit the Congress-NCP combine. It is this electoral arithmetic that Amit Shah is trying to drive home, with Uddhav.

Will Uddhav accept Sharad Pawar’s invitation? That would prove very difficult for a party, which has survived all its life on the anti-Congress plank. It will not be an easy task for Uddhav to convince his voters and workers about such an alliance. It is bound to hurt Sena’s base and consequently, the BJP is bound to exploit it. Their agenda of Hindutva is yet another obstacle. And Amit Shah is more than aware of this.

According to Sena insiders, Uddhav will wait till the Assembly elections in Madhya Pradesh, Rajasthan and Chhattisgarh. If the BJP loses these states, the NDA allies will definitely have an upper hand. As per surveys, it will be difficult for the BJP to get a majority in the 2019 Lok Sabha poll. Modi’s popularity is on a steady decline. In such a situation, Uddhav and his party can play a critical role.

Uddhav always wanted to play the "big brother" to the BJP, just like his father Bal Thackeray once did. But Narendra Modi-Amit Shah simply did not give him that opportunity after the 2014 elections. Now is his chance to strike back.

For now, it will be "wait and watch" for Uddhav Thackeray. Presently, he is busy savouring the situation, but will definitely try to demand his pound of flesh from the BJP in the near future.

#Maharashtra, #Amit Shah, #Shiv sena-bjp
The views and opinions expressed in this article are those of the authors and do not necessarily reflect the official policy or position of DailyO.in or the India Today Group. The writers are solely responsible for any claims arising out of the contents of this article.