Why Shiv Sena, a supporter of hard Hindutva, is criticising BJP over Hindutva

Uddhav Thackeray is deliberately creating ambiguity to keep his own party members confused.

A lot has been written and speculated about the possibility of an alliance between the Shiv Sena and Bharatiya Janata Party for the 2019 general elections. Despite Shiv Sena saying it on numerous occasions that it will contest the polls alone, the speculations haven't stopped. Who is Uddhav Thackeray trying to confuse? (Source: India Today)

In a recent interview given to Shiv Sena MP Sanjay Raut for the party's mouthpiece Saamana, Uddhav Thackeray once again made it clear that his party is not going to have a tie-up with the BJP. This despite the BJP leadership making several attempts at wooing the party and softening its attack on the Shiv Sena leadership.

While Thackeray has reiterated that he is in no mood to relent vis-a-vis the BJP, it still hasn't cleared the air over whether Shiv Sena MPs will quit Maharashtra and central government. What is also not clear is if Shiv Sena's stance was communicated to BJP president Amit Shah when he met Thackeray in Maharashtra after winning the Palghar Lok Sabha by-election.

In the last few months, Shiv Sena has dropped several hints that it will contest the 2019 Lok Sabha election without the BJP.

First, Shiv Sena passed a resolution in its national executive stating henceforth the party will contest elections on its own.

Second, the candidate Shiv Sena fielded in Palghar Lok Sabha by-poll that was taking place due to the death of BJP MP Chintaman Wanga was the deceased MP's son Shrinivas.Third, despite repeated requests, Shiv Sena decided to not support the BJP on the floor of the house when it came to the no-confidence motion.

The fourth example could be Thackeray's recent interview but it still leaves room for ambiguity. It looks like the Shiv Sena is using this ambiguity to keep the party intact.

While the interview leaves the question of alliance open-ended, the most important takeaway for me from the interview is the highlighting of the difference in the concept of Hindutva.

Criticising mob lynching incidents across India, Thackeray called it 'fake' Hindutva but on the other hand, boasted about Shiv Sena's role during Mumbai riots post the Babri Masjid demolition.

He also blamed the BJP for the rise in hysterical Hindu fringe elements. Interestingly, Hindutva was not on Shiv Sena's agenda till the late 1980s.

It has always been BJP's (or before that Jana Sangh's) core agenda despite some deviation during Emergency and post-Emergency period.

Sensing the political currency of Hindutva sentiment, the Shiv Sena endorsed it during the Mumbai by-elections in 1987.

The party won the poll in the name of Hindutva but the elected MLA Ramesh Prabhu's election was cancelled for using religion in the campaign. The development, however, helped Shiv Sena catapult from being a regional party to a wider pro-Hindutva party. 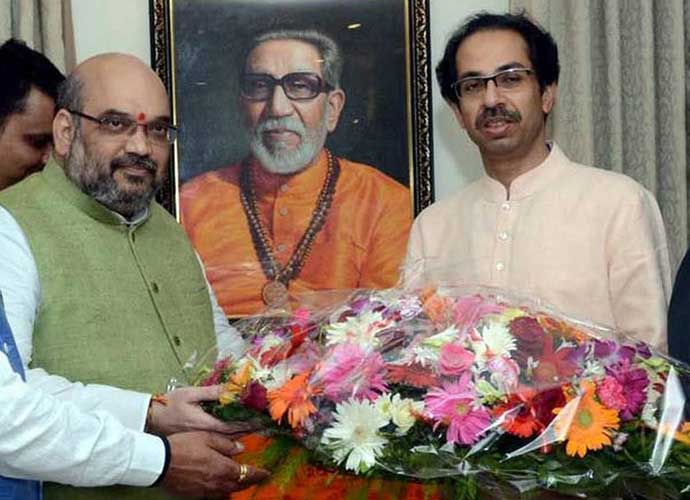 Will he, won't — Uddhav Thackeray keeps party members guessing on withdrawing from the state and central government. (Source: PTI)

This is the reason why the newly formed Janata Dal formed an alliance with the BJP to counter Congress across India but not Maharashtra. Janata Dal refused to share a platform with Shiv Sena sighting its ultra religious stance.

The Hindutva plank helped Shiv Sena make great political strides by letting it set base among the Gujarati and north Indian voters. The highly communal atmosphere that prevailed post Babri demolition was exploited by the Shiv Sena to gain a foothold when it came to the Hindu vote bank.

Even the Srikrishna Commission that was constituted to conduct an inquiry into Mumbai riots put bigger blame on the Shiv Sena than its ally BJP. Shiv Sena supremo Bal Thackeray had always boasted of propagating hard Hindutva and also hailed then Gujarat chief minister Narendra Modi as a hero after the 2002 riots.

Later, when Shiv Sena was part of the Atal Bihar Vajpayee government, Thackeray always criticised the BJP for going soft on Hindutva and changing track after coming to power. On the other hand, he also kept saying that the Shiv Sena was with the BJP only because of its core Hindutva agenda.

Speaking on the incidents of mob lynching in the country, Thackeray said BJP's idea of Hindutva is fake. | @sahiljoshii https://t.co/lIEv5owrCH

Uddhav Thackeray stayed on the same track set for the party by his father but, of late, he seems to have realised that Shiv Sena is no longer seen as the party of choice for the pro-Hindutva constituency because that space has been claimed by the BJP.

This could be the reason why Uddhav is trying hard to prove that Shiv Sena's version of Hindutva and that of the BJP are at a variance.

Shiv Sena wants to remain right of centre, so it can't go with the Congress or join the Opposition block because the party's leadership knows that it rose to prominence by fanning the same sentiments for mob justice.

However, criticising the fringe allows the party the scope to claim more space among the Opposition's voters.

More importantly, Uddhav is maintaining an ambiguity by saying he won't fight the 2019 battle alongside BJP but not withdrawing from the government so that fence sitters in his own party stay confused and do not cross over. He wants the fence sitters also to remain prepared for the first Lok Sabha election that the party will be contesting alone.

Post your comment
#Babri demolition, #Hindutva, #Shiv Sena, #Shiv Sena-BJP alliance
The views and opinions expressed in this article are those of the authors and do not necessarily reflect the official policy or position of DailyO.in or the India Today Group. The writers are solely responsible for any claims arising out of the contents of this article.