Shujaat Bukhari's murder sparked online grief and anger. But why was the killing of an army man relatively overlooked?

A day before Eid, four men were killed by terrorists in Jammu and Kashmir. The death of one – Shujaat Bukhari, editor-in-chief of the daily Rising Kashmir – was met with an outpouring of grief, particularly and understandably, from his fellow journalists. The news of Bukhari's death made it to the front pages of the national dailies ( Photo: Front page of Hindustan Times on June 15)

But the death of his two security officers, killed when terrorists fired on Bukhari’s vehicle just outside his newspaper office in Srinagar – went relatively un-mourned by the same. The outpouring of grief for Bukhari was massive. In comparison, the condolences for the security officers were relatively few and far between. The same was the case for army rifleman Aurangzeb, abducted reportedly by Lashkar-e-Taiba and Hizbul Mujahideen terrorists while on his way home for Eid – among other gifts, Aurangzeb had promised his kid brother a cricket bat – tortured brutally over hours, then shot dead, his face and head left in bits by their bullets.

When he joined the army as a fresh-faced young lad hailing from a rural Poonch family, one with an illustrious record – his father, Mohd Haneef, had been a sepoy in the J&K Light Infantry, his other sons serving the Indian Army – Aurangzeb’s face was very round. An ID card shows him as a young boy, with a short mop of thick black hair, and a face that looked like he had been fed rice, kanti and kheer by the hands of a loving, doting mother. An ID card shows him as a young boy, with a short mop of thick black hair (Photo: Twitter)

It grew leaner, his cheekbones sharply defined, his hair longer, his eyes sparkling with confidence, with skills, with living life. His father has the same eyes. But Aurangzeb’s father’s eyes aren’t smiling now. They are full of suffering, of pain, the man, dressed in a thin grey shalwar-kameez, standing still, yet seeming blown away.

Like within him, there was nothing, just a raging storm.

A storm that takes over everything inside you.

It twists and turns and pulls and pushes your heart till you are sure this has broken and flown away in a billion little bits.

The sort of storm that makes you fall over and howl. 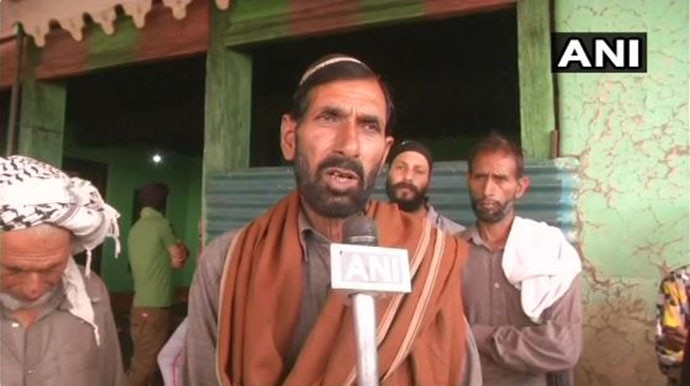 Despite this, Aurangzeb’s father didn’t weep.

Instead, he promised to send more of his sons to the Indian Army. "If we don’t fight to defend our nation, who will?" he asked.

It’s a great question. Not just because of its ethical power but its clarity, its honesty in this age of polished falsehoods. That we live in a time of twisting truths and crushing lies was in full evidence in some of the reactions apparently condemning Shujaat Bukhari’s death.

Many of these were deeply genuine. How could these not be for a human being, a journalist, an editor, just an unarmed man riding in a vehicle in his town – such a strange town, full of aching, breaking wooden buildings, ringed with mighty hills, a town a pale sun rises on but never fully warms – had been killed by a gang of vicious, violent cowards?

But some of these reactions were more than heartfelt.

Very swiftly, a little "liberal lynch mob" formed and went for one of Bukhari’s recent critics in a manner that can adequately be described as "armchair-caveman".

On the very evening he was killed, a "liberal-arty" mob tried to gang up against Anand Ranganathan, a right-wing commentator who’d raised objections to Bukhari’s purported views (on limits to the freedom of expression over religion) at a recent Delhi event. Bukhari had responded strongly but civilly over Twitter and the matter rested there. Till Bukhari was killed a few days later.

"Are you happy now", snarled some of his mourners then, inexplicably but savagely at Ranganathan. "Shujaat is dead and your words helped murder him!" "You are responsible for his death", some screeched online. "And then, he died," others moaned, in some sort of stale-cheese imitation of a mawkish newspaper headline once given to a terrorist hung by the Indian state. "Hope you're happy Anand Ranganathan to smear someone when he wasn't even there to defend himself. You are sick and a shame on journalism."

Remember, there was a vicious RW hate campaign against Shujaat Bukhari led by the vile supremacist @aranganathan72 just before he was killed. Never forget https://t.co/I5omNaAqVw

Others were still shorter on subtlety: "Paid trolls like Anand Ranganathan, who have zero journalistic experience, have no business sitting on a high horse, pinning agendas on journalists & editors who do actual fucking reporting. And face bullets."

Or it was very, very sick, resembling what Pankaj Mishra, in his recent London Review of Books essay The Mask It Wears, quotes Arthur Koestler on, "The deterioration of the intelligentsia…is as much a symptom of disease as the corruption of the ruling class…" Nowhere could the ‘deterioration of the intelligentsia’ be plainer. Here was a 'liberal' (presumably they’d not disagree with this classification) 'intelligentsia', trying to name and shame someone for expressing his views on Bukhari’s reported views.

Since when did that become a crime?

And since when did the hoodlums of the Hizb, the louts of the Lashkar, become so sophisticated as to drop the rocks or rifles in their hands and hear people debate at conferences, to draw up their hit-lists accordingly?

It’s not that the "liberal lynch mob" didn’t know this. But grieving over Bukhari thus – and attacking a random commentator alongside – gave an opportunity to do something else.

Make this about themselves.

Some of the tweets that attacked Ranganathan do attest to the deep frustration with the right-wing the (that oxymoronic term) "left-liberal" in India feels. The frustration is not because of any deep-rooted commitment to real secularism, for most of these liberals happily align with the Congress that has been responsible for being in power – and duty – during the 1984 riots against Sikhs, the Hashimpura massacre, the decades of brutal human rights violations, twisted torture, the choking suppression of civil freedoms in Kashmir.

No, this isn’t about sticking up for any ideals.

This is about sticking up for a comfort zone, which the 2014 elections jolted many Indian "liberal" sofas so far out of.

There is no denying the Hindu right wing’s idea of "intellectuals" can leave you falling over laughing in ironic pain.

But often, the two-facedness of the ‘secular’ liberal does exactly the same.

This was another such bitter occasion.

The swift transition of the outpouring of grief, to the virtual assaulting of a passing-by commentator – ostensibly over 'Shujaat, my good friend', whom I just met in Delhi/Lisbon/the Republic of Khan Market – showed it all.

My friend Shujaat, who was a brave journalist.

I too am under grave threat.

I too have been saying this constantly, telling everyone I meet about how my freedom of expression has been quashed over the last four years. I have written in every newspaper, foreign and desi, about how I am being totally suppressed in Delhi. I am on Twitter 24x7 talking about how my right to speak is curtailed. I even get death threats while posting my vacay pictures on Instagram. And all this goes on, despite me telling everyone every single day of how many death threats I got today.

This papier-mache circus — and that's what truly pops up when 'the story' appears in the seventh paragraph of a media star’s story about 'the story', which is not 'the story' but herself — is why Bukhari’s brutal, horrifying death became the chattering, clattering media event it did.

And this is why Aurangzeb’s death — no less horrifying; the young soldier was filmed in a video just before he was shot, where his captors shoot questions about his unit, his role in killing their compadre, called, in the best style of the street hoodlum, "Tiger Saleem", a video where his eyes look straight into the camera, strangely calm, his face saint-like, him looking slightly dazedly at his hand, broken in an encounter some time back (perhaps sometimes, it still hurt) — received relative radio silence. The response from Kashmir has been the predictable paradox, half-sullen silence, half-traumatised shock. But while thousands have posted their reactions online, the comparative quiet from elite 'íntellectual' circles is quite marked. Videograb of the footage showing how Aurangzeb was kidnapped

Because, come on, what was Aurangzeb but a soldier?

Yes, he made the supreme sacrifice – but isn’t that what soldiers – and PSOs, like Bukhaari’s – are meant to do? They’re the porters of nation-building, its workers, its chowkidars. They’re not English-speaking intellectual types. They’re not People Like Us. They don’t go shopping in Khan Market for blueberries and blue cheese. They don’t wear white linen against which their copies of Home Fires gleam. They don’t get invited to conferences abroad or air their views on TV every night.

No one asks them their views, for that matter.

We want ‘dialogue’ with the brutes who kill them, but we don’t want to know what their views are. We only hear their names once they are killed – and swiftly forget these to talk about our own again.

The shameful treatment accorded to Aurangzeb by some thus was displayed once more in the reaction to the end of the Ramzan Ceasefire announced by the Indian government. 'Tragic'. 'Appalling'. 'Shocking', came the cries. 'Again, innocent civilians waving their little ISIS flags, only trying to lynch the army to gain their fundamental rights, will get brutally mowed down by our big, bad, bullying forces.'

But I, for one, am relieved the ceasefire is done.

And that, at least, while the liberals, the intellectuals and the valiantly well-dressed defenders of the freedom of speech and the free press will speak on, his unit will try to avenge rifleman Aurangzeb.

Whose face was once rounded with the rice a loving mother fed him.

Whose eyes were exactly like his father's – but those are full of suffering, and agonising pride, today.

Also read: Mourn Shujaat Bukhari's death, but ask who killed him and why

Post your comment
#Liberals, #Ramzan ceasefire, #Jammu and Kashmir, #Shujaat bukhari
The views and opinions expressed in this article are those of the authors and do not necessarily reflect the official policy or position of DailyO.in or the India Today Group. The writers are solely responsible for any claims arising out of the contents of this article.