[Book excerpt] R Aravamudan, a pioneer of the Indian space programme, describes the ecstatic moment in this personal history.

Finally D-day arrived on August 10, 1979, a good five years after the date that Sarabhai had originally proposed. The SLV-3 was assembled for flight on the pad.

Kalam used to define the very act of bringing the assembled vehicle on to the launch pad as "50 per cent success".

He would go on to assign success percentages to various events, like the take-off, first-stage function, second-stage function and so on till the actual injection into orbit of the satellite. The launch was scheduled for the early morning on August 10, 1979.

And a few minutes after the vehicle took off, it crashed into the Bay of Bengal. Our first attempt at launching a satellite launch vehicle was unsuccessful.

Kalam would often say a noble leader would take the onus of failure on himself and give the credit for success to his subordinates.

And now this was precisely what Dhawan did. He never once blamed Kalam or his team for the failure during the press conferences which followed. The media was not so aggressive in those days. But this was a landmark event and they were at the gates of SHAR, clamouring to know what had happened. Dhawan, who was very wary of the press, did not allow them in.

He knew that the success of the mission at this stage was dicey. He also feared that undue publicity would be counterproductive.

We were all very disappointed. Kalam was particularly depressed although he knew, as we all did, that failures were quite common in the rocket business the world over. Dhawan and Brahm Prakash were very supportive.

They urged everyone not to give up and to find out what went wrong and fix it.

On analysis, it was found that the loss of control was due to the failure of the reaction control thruster system – an undetected leak had drained it of the control fluids.

We put our heads down and set to work on another attempt.

Brahm Prakash, who headed VSSC during the years leading to the first attempted launch of SLV-3, retired in 1979.

However, he continued as a member of the Space Commission. The task of seeing the SLV-3 project through and steering VSSC now fell on Vasanth Gowariker.

We had all got used to the gentle and benevolent presence of Brahm Prakash who was almost a father figure both in age and stature.

It took us a little while to restore the momentum of work.

The second SLV-3 launch was scheduled on 18 July 1980, almost a year after the first one.

The payload was Rohini 1, a satellite weighing 40 kg. The mood was very tense this time around and not just because of the launch.

Sanjay Gandhi had died in a plane crash just a month ago even as we were putting the finishing touches to our vehicle.

He had been trying out some acrobatic manoeuvres in his training aircraft.

Delhi was in chaos as Indira Gandhi tried to come to terms with the loss.

In Trivandrum and SHAR this had a trickledown effect, but we were determined to go ahead with our launch.

This time Dhawan had decided to allow Doordarshan to telecast the launch. The press was still not to be allowed inside until after the event. Since Doordarshan was not yet equipped to do a live telecast, some engineers from SAC had come up with an ingenious idea.

They had tethered a huge balloon with a transponder halfway between SHAR and Madras.

Gummidipoondi was the chosen location for the balloon which floated at a height of about 1 km above ground.

A long strong cable secured it firmly to the ground. The distance as the crow flies from SHAR was about 80 km. Experts from TIFR’s balloon facility at Hyderabad had been roped in for this project.

Yash Pal and I were to do the commentary in-house. Gita had also been invited to join us and ask questions from a layperson’s point of view, and so she came with me from Trivandrum for this historic launch.

We had left our small kids with Gita’s parents in Bangalore. They were very excited at the prospect of seeing their parents live on TV.

Bangalore still didn’t have TV coverage in those days and so their grandparents had arranged to watch the launch at the house of a friend who had rigged up an extra-powerful antenna to catch Madras Doordarshan’s telecast.

Everything was ready and the nervousness was palpable. The press at the gates had been baying for information for over three days.

Inside, during one of the meetings, a senior scientist doodled loops and a crash on his notepad and remarked to his neighbour, "As long as the rocket doesn’t take the trajectory of Sanjay Gandhi’s plane, we’ll be fine!"

Yash Pal, Gita and I were rehearsing our questions the previous day when we heard some bad news. The blimp had flown off!

This kind of balloon was usually used in events like carnivals which took place in areas where there was a benign breeze that created just a gentle oscillation.

No one had accounted for the strong winds which roared through Gummidipoondi and wrenched the balloon off its tether.

Nothing could be done about it as the launch was scheduled for the next day, at dawn. We decided to record the commentary and rush it to Madras by road.

The launch had its moment of nail-biting suspense. A few minutes prior to take-off the command was given to detach the umbilical cable from the rocket.

There are two types of umbilical cables connecting the rocket to the ground.

One set comes off automatically during take-off and the other set, which is much heavier, is detached remotely with an electricalcommand.

The remote-controlled cable just refused to come off! For a few minutes no one knew what to do. Obviously the launch could not take place with a stuck cable so we had to call a "Hold".

The vehicle was fully armed and it was quite unsafe for anyone to venture near. The saviour of the day was a technician named Bapiah. He volunteered to climb up the launch tower and manually coax the cable off.

The tower was around 60 ft high, which was about the same height as the rocket. We had no other option but to let him try, with the safety officials turning their backs for a short while. 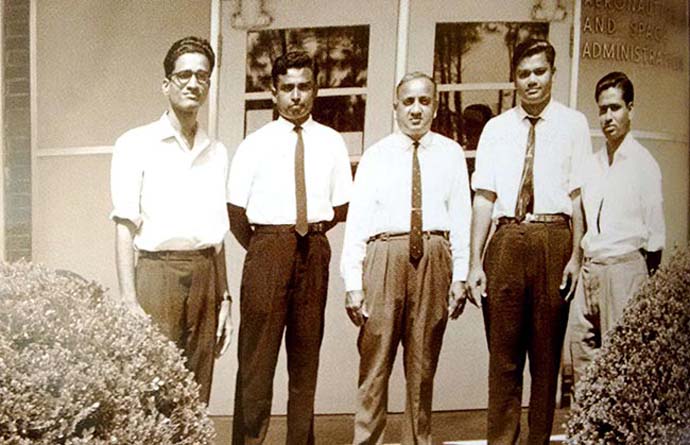 Bapiah quickly climbed the tower and gave the cable a hefty kick – and it mercifully came off! The rest, of course, is history. The flight was a maiden success – a milestone in ISRO’s history.

And so on July 18, 1980, almost 17 years after the first foreign Nike-Apache sounding rocket was launched from TERLS, a made-in-India rocket launched from Indian soil injected an Indian-made satellite into a 300km by 900km orbit.

It was an ecstatic moment. Kalam was hoisted on the shoulders by his colleagues. In Trivandrum we were all welcomed as heroes when we stepped off the plane. My little sons were thrilled.

In their school the SLV had been dubbed the Sea Loving Vehicle. And now their father’s organisation had been vindicated!

The successful SLV-3 flight was a real morale booster to ISRO. India had become the sixth member of the exclusive club of space-faring nations. Decades have passed by since then and this club has not increased in strength!

Two more successful flights followed and the credentials of SLV-3 were firmly established. The payload capability of SLV-3 was not significant. There was no future to it except to provide a learning platform for ISRO.

And that it did in great measure indeed. A spectrum of technologies and concepts had been validated. A sound management system had been established, which could tap into all the available resources in the country.

The areas at ISRO where great strides were made during this time included high-energy solid propellant motors, fibreglass and Kevlar motor cases, precision fabrication including use of 15CDV6 steel cases, control thrusters using bipropellants, control components, avionics systems including inertial platforms, and a host of software used for establishing and operating a launch base.

However, the most important factor was the confidence that the successes imparted – teams began work on building larger launch vehicles and more complex payloads.

Significantly, out of the 1,200 scientists and engineers who worked on the SLV-3 project, hardly a handful had had a foreign education. Our homegrown engineers were the ones who built our first satellite launch vehicle.

Many years later, during the silver jubilee celebrations of the first successful SLV flight, I heard many of the engineers who had been part of the core development team reminiscing about the early days when the facilities were basic.

Some remembered using mechanical calculators, drafting boards with T-squares and computers which used punch cards. Even propellants were hand-mixed.

As I listened to them, I felt proud that twenty-five years later, most of them were still there, working on advanced launch vehicles.

It was a roaring success. Prime Minister Indira Gandhi, who was our special guest that time, declared she was "thrilled, excited and proud" to witness the launch from Sriharikota.

The successful launch of SLV-3 in 1980 followed by two more in the succeeding years had restored the confidence of the ISRO teams.

Now we needed to increase the payload capacity of SLV-3 to at least 100 to 150 kg if we were to carry out any meaningful experiments in low earth orbit.

The next task was therefore to augment the payload capacity of the vehicle. We decided that the simplest way to do this was to add strap-on motors to the first stage.

In this way we could also try out a technique that could be used later for larger vehicles.

#APJ Abdul Kalam, #ISRO, #SLV-3
The views and opinions expressed in this article are those of the authors and do not necessarily reflect the official policy or position of DailyO.in or the India Today Group. The writers are solely responsible for any claims arising out of the contents of this article.

R Aravamudan is an award-winning senior scientist associated with the Indian space programme since its inception. He has authored ISRO: A personal history, with veteran journalist Gita Aravamudan.