Band-aid Politics: Why Sonia Gandhi may not be able to revive the Congress anymore

The party faces cash crunch to generation clash. And Sonia of 2019 is not the Sonia of 2009.

Sometimes, the lack of surprise is a surprise. Like it was in the case of Sonia Gandhi's re-election as Congress president, albeit interim, after much protestation by Rahul Gandhi that the next Congress chief will not be from the Congress family. 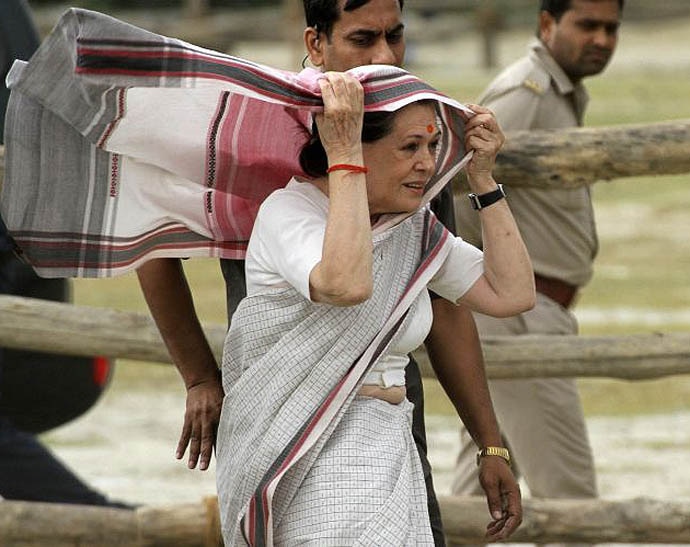 This was far from astonishing. Except, perhaps, for Rahul Gandhi sticking to his declaration of not taking back his resignation. But if his associates and advisers thought that it could be portrayed as a great act of 'sacrifice' — a la Sonia Gandhi refusing prime ministership in 2009 — then it was a damp squib.

Similarly, the other version in circulation — that of Sonia Gandhi accepting the post of interim president reluctantly and almost under duress failed to cut ice.

If youngsters like Sachin Pilot, Jyotiraditya Scindia and Mukul Wasnik harboured dreams of being anointed Rahul's successor, they were being led up the illusory garden path of 24, Akbar Road by some wily elders in the party.

While many theories may be in circulation about the old guard versus new or Team Rahul vs Sonia loyalists — under the present construct of the party there was no way to either dislodge the Gandhis or weaken their hold. The only alternative could have been installing a proxy or puppet to keep the seat warm for a Gandhi or Gandhi-Vadra to move in when the stars were propitious again.

However, as it turned out, it was difficult to even come to a consensus regarding a 'place holder' without risking a revolt. It is entirely possible that the drama was choreographed to achieve the same outcome yet, the family had to go through the motions. That was good for optics as otherwise, there could be criticism of not giving the Congress Working Committee (CWC) have a go at selection.

All a show? The CWC decision-making process has been critiqued. (Photo: ANI)

Be that as it may, the problem lies much deeper and Sonia Gandhi's coterie may have at best succeeded in applying a band-aid over a gashing wound.

That there is no ready alternative leadership in the lower rungs of the party is no state secret. That has been the dynasty's modus operandi since Indira Gandhi's time. It has systematically decimated all leaders with a mass base and surrounded themselves by courtiers with no grassroots support.

However, what the family did not bargain for is a disruption in the succession plan. Sonia Gandhi gave her son enough and more time for getting ready to take on the mantle. After a few false starts and nervous retreats, Rahul Gandhi did give the impression of having finally arrived. But it took a second TsuNamo to bring him crashing down to the Town Hall in Khan Market on May 23. Rahul Gandhi was undone politically in the TsuNamo that struck on May 23. (Photo: ANI)

The Congress is, therefore, faced with a twin crisis of leadership. There is no apparent heir within the family. As some commentators have pointed out, Sonia Gandhi of 2019 is not the Sonia of 2009. Apart from her health, she is no longer as hands-on or actively connected to different arms and legs of the party, especially in the states. Therefore, she would be heavily dependent on aides like Ahmed Patel and Ghulam Nabi Azad.

The old guard will naturally try to consolidate their position and tighten control. Therefore, they may not be keen to facilitate a transition, especially, having seen how Rahul tried to marginalise them previously. This syndicate of palace guards form an axis with the chief ministers, who too are not on the best of terms with the wannabes come lately.

Besides, as this writer has repeatedly pointed out, most of these veterans are close to or well past their sell-by date. Also, they do not have an established succession line in place. Ceding power now would mean pretty much retiring into oblivion, which diehard politicians would always resist.

Again, the biggest disappointment for Congress has been Priyanka Gandhi. Her guest appearance-style of politics was neither able to garner votes before the elections, nor managed to inject life into the ravaged troops after the election, despite jumping headlong into the troubled waters of Sonbhadra. 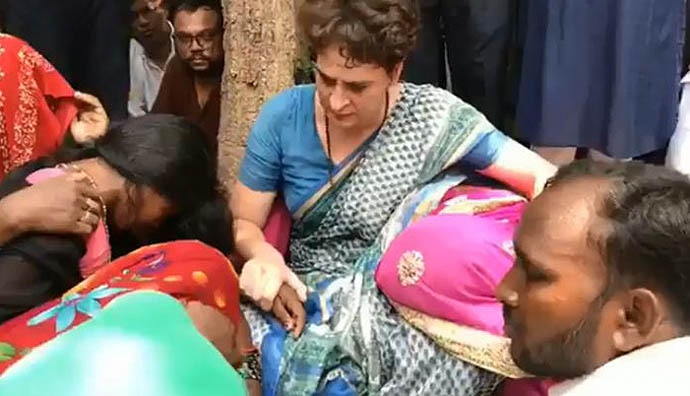 Priyanka Gandhi tried to fish in the troubled waters of Sonbhadra but came back empty-handed. (Photo: India Today TV garb)

More importantly, she seemed out of depth in resolving the crisis after Rahul's resignation. Much to the disappointment of her fans — notwithstanding their physical resemblance, she is not a natural like her grandmother, taking to the political waters like the proverbial duck.

Sonia will be working with another major handicap. From all accounts, the Congress high-command is reported to be strapped of cash. Without showing any visible signs of revival and not being in power at too many places, it would have difficulty in finding new sponsors. Many who had punted on the party for the Lok Sabha elections are still counting their losses.

The scenario outside the family is equally bleak. The fault lines in the CWC are there for all to see. The power blocks, apart from being fragmented, are split between the young and old — who have no love lost for each other.

Even within the same age group or seniority there is little cohesion or alignment. In short, it is confusion worse confounded.

The Congress is caught in a quandary. It cannot afford an All India Congress Committee (AICC) election in the near term with a number of state elections lined up — in Haryana, Maharashtra, Jharkhand and Delhi in the next 12 months or so. At the same time, if it is not able to resolve the leadership crisis at the centre it can be certain of another rout.

The nuanced statements of several leaders after Sonia Gandhi's reinstatement indicate that they are not comfortable with the impasse, even if they are cautious about expressing dissent just yet.

Congratulations to @INCIndia WorkingCommittee for making the best decision in current circumstances, requesting Smt SoniaGandhi ji to take over as Interim President pending the election of a regular Pres by the AICC. Let elections allow Party workers to decide who shld lead them.

Regretfully, Rahul Gandhi ji (@rahulGandhi) has stuck to his decision to resign but it is an honour to have Smt Sonia Gandhi ji (@iamsoniagandhi) once again as our party president. I look forward to working under their combined leadership!

Happy to see Smt. Sonia Gandhi ji back in the saddle. It was the best decision in the current circumstances. Her experience and understanding will help guide @INCIndia. I wish her and the party all the best. pic.twitter.com/IathmJDkBq

In these difficult times, only Smt. Sonia Gandhi could have led the Congress and brought smile to the faces of disappointed workers. Her taking over is interim Congress President in these crucial times is important. She has done it before, she can do it again. My best wishes 💐 pic.twitter.com/GZdKoa82vX

What we might see, therefore, in the coming days is a reassertion of strength by regional satraps. For instance, the Hoodas of Haryana, Chavan in Maharashtra and Maken in Delhi are unlikely to sit quiet.

Though they may stop short of open revolt, it will surely churn the placid waters, leading to a weakening of the central high-command structure. That might, in turn, trigger attrition, which, if it gathers momentum, could manifest into new regional outfits like the Trinamool Congress (TMC) or YSR Congress emerging in the near future.

However, a total split down the middle will require not only collaboration between the seniors and Gen-Next of the party but also in some form, support of ex-Congressmen of standing like Sharad Pawar and Mamata Banerjee plus a few potential rebels like Siddaramaiah.

It is this process of disintegration that Sonia Gandhi may be able to hold in check for a while - but not for long. Unless the Congress is able to get its act together quickly, it would be reduced to a party of tweeples with leaders tweeting in different voices and directions.

Also read: What makes Sonia Gandhi tick? And with Rahul Gandhi's alternative ideas for Congress, can she do the trick?

#Congress, #Congress president, #Rahul Gandhi, #Sonia Gandhi
The views and opinions expressed in this article are those of the authors and do not necessarily reflect the official policy or position of DailyO.in or the India Today Group. The writers are solely responsible for any claims arising out of the contents of this article.