Issues between the US and China are not likely to be worked out quickly.

Singapore Prime Minister Lee Hsien Loon’s warning, that Asian nations may be forced to make a difficult choice between their ties with China and their relationship with the US, if tensions continue to grow between the two, is timely.

Mr Lee made the comments on Wednesday at the end of the annual East Asia Summit that was held in the island-nation this year.

Lee’s remarks are a timely reminder of the fluid geopolitical situation in the region, where China has important economic links with the region that was once closely linked to the US. The region is feeling the geopolitical pull of China that has already succeeded in building deep ties several of its members like Cambodia, Laos and Myanmar.

At the same time, Beijing has disputes with the Philippines, Brunei, Vietnam, Malaysia and Indonesia. Trade tensions between the US and China have introduced their own dynamic into the situation, because many ASEAN nations have deep ties with China. Singapore, for example, is the biggest investor in China.

Issues between the US and China are not likely to be worked out quickly. Even if they work out a ceasefire of sorts on the trade issue, they still have lots to quarrel about, ranging from Taiwan, the South China Sea and economic relations not related to tariffs.

In fact, trade tensions are a manifestation of the strategic competition between the two countries. US steps to limit technology transfers to China through legislation, such as the Foreign Investment Risk Review Modernisation Act (FIRRMA), will set the tone for the relationship regardless of trade deals. There are two big geopolitical players in contention here, that of the US and China.

So we see a Chinese vision that is variously expressed as “China in the middle”, “China Dream” or sometimes as a “community of common destiny” which, some say, is derived from the Zhou dynasty model of tianxia or “all under the heaven”, where everyone lives harmoniously together under a good emperor.

Then, there is the American and Japanese vision, first manifested as the pivot, now expressed as the idea of a ‘Free and Open Asia Pacific’. Please note that “free” and “open” are important qualifiers that confer the benign geographic concept with political context. This is layered upon older American hub and spoke alliances where the US has bilateral security treaties with Japan, South Korea, and Australia. One of its more recent iterations has been the Quadrilateral Dialogue or the Quad, involving India, Japan, US and Australia. 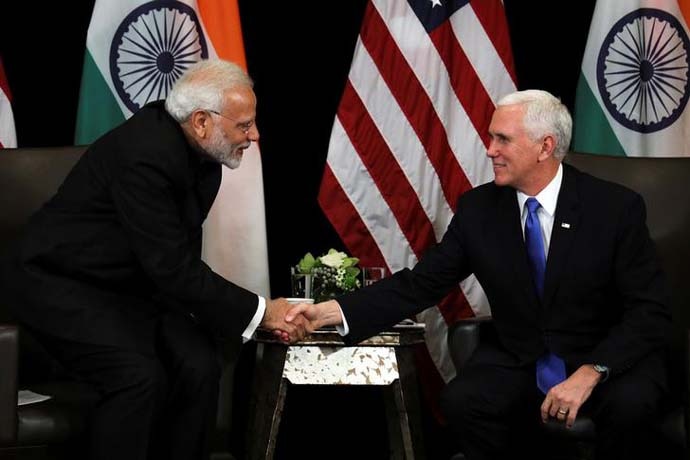 Where does India figure in all this? (Reuters photo of Narendra Modi with Mike Pence)

But the ASEAN has insistently pushed its own security ideas.

These are in emphasising the centrality of the ASEAN work through institutions created by the grouping such as the East Asia Summit, the Asean Regional Forum (ARF), Asean Defence Ministers Meeting (ADMM)-Plus format.

Formally at least China, India, the US all agree with the concept of the centrality of the ASEAN. They are participants in the ASEAN’s mechanisms. However, the body itself is divided and has not taken any clear-cut stand either in support of the FOIP or to criticise Chinese activity in the South China Sea.

ASEAN cannot stand still. It needs to continue to take steps that will make it an attractive investment destination. One step towards this is the removal of non-tariff barriers. And harmonising ASEAN’s approach toward services and labour mobility would cement the South-east Asian regional organisation, as well as taking political steps to hedge against longterm uncertainties such as the Sino-US competition, which is not going to go away soon. 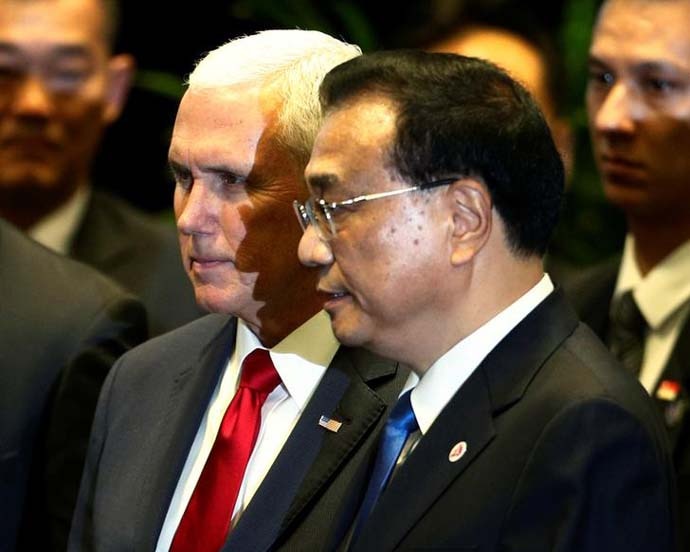 Issues between the US and China are not likely to be worked out quickly. (Reuters photo of Mike Pence with Chinese Premier Li Keqiang)

Where does India figure in all this?

India has good ties with the ASEAN and last January, they were collectively the chief guests on Republic Day.

India has also held exercises with its ASEAN neighbours since 1995.

Despite all this, the reality of ASEAN is best brought out by the recently concluded East Asia summit where US Vice President Mike Pence rubbed shoulders with Chinese Premier Li Keqiang and Indian Prime Minister Narendra Modi.

Its centrality to the Indo-Pacific is manifest. What is not clear is what it wants to do with this centrality.

#India, #South china sea, #ASEAN Summit, #Us china trade war
The views and opinions expressed in this article are those of the authors and do not necessarily reflect the official policy or position of DailyO.in or the India Today Group. The writers are solely responsible for any claims arising out of the contents of this article.