Is Sri Lanka on the verge of another civil war?

After days of peaceful protests over the current financial crisis in Sri Lanka, five were killed in violent clashes on Monday. We take a look at how the island nation reached here.

Sri Lanka had to deploy thousands of troops to enforce a curfew after five people were killed and over 200 injured in clashes on Monday that prompted Prime Minister Mahinda Rajapaksa to resign.

The ancestral house of the Rajapaksa family and the homes of several other ministers and ex-ministers were attacked and set on fire.

"After an operation, the former PM and his family were evacuated to safety by the army," a top security official told AFP.

The country has been facing a severe economic crisis for over a month now, which has led to acute shortages of fuel, medicines, and electricity supply. The prices of essential commodities have also skyrocketed.

We take a look at how Sri Lanka's economy spiralled into a crisis and the events that led to the current turmoil in the island nation. 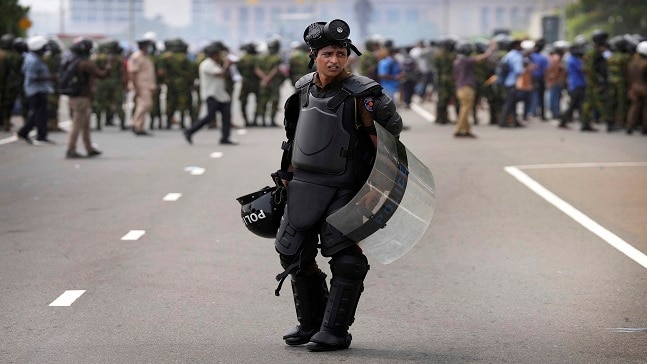 Sri Lanka unrest.#AFPgraphics factfile on unrest in Sri Lanka on May 9 after supporters of the president attacked anti-government protesters and authorities declared a curfew pic.twitter.com/rgRhV5JMiK

Mahinda Rajapaksa said he was resigning to pave the way for a unity government.

According to an AFP report, under Sri Lanka's political system, even with a new unity government, the President will have the power to appoint and fire ministers and judges, and enjoy immunity from prosecution. "Unless President Rajapaksa steps down, no one - whether the masses in the streets or key political stakeholders - will be appeased," analyst Michael Kugelman from the Wilson Center told AFP.

The Sri Lanka government has approached the International Monetary Fund (IMF) for a bailout. The IMF has said it held "fruitful technical discussions" with Sri Lanka on its loan request, while the World Bank has said it was preparing an emergency aid package for the island nation, reported Reuters.

#Srilankaeconomiccrisis, ##Rajapaksa, #Srilankacrisis
The views and opinions expressed in this article are those of the authors and do not necessarily reflect the official policy or position of DailyO.in or the India Today Group. The writers are solely responsible for any claims arising out of the contents of this article.