India and Sri Lanka need a fresh start in diplomacy

With the Rajapaksa brothers in power as President and Prime Minister, India has its diplomatic challenges worked out.

The results of the recent elections in Sri Lanka show that dominant powers cannot easily control their periphery.

We have seen how much more powerful countries than India, such as the US, fail to get their way in their sphere of influence, whether in Cuba in the past and Venezuela today, not to mention the election of a left-leaning candidate as the President of Mexico earlier this year. The fact that the Rajapaksa clan, supposedly pro-China and less responsive to India’s interests, has come back to power, proves the point.

The election of Gotabaya Rajapaksa as President was not unexpected in view of the serious internal rifts in the ruling coalition, aggravated by the terrible Islamic terrorist attacks in Sri Lanka in April. The February 2018 local elections had already indicated the political revival of the Rajapaksa clan. India has kept its channels with the clan open, judging by Mahinda Rajapaksa’s visits to India in September 2018 when he met Prime Minister Narendra Modi, and in February 2019. It is a curious situation in Sri Lankan democracy with the Rajapaksa brothers in power as President (R) and Prime Minister (L). (Photo: Reuters)

The challenges for India to protect its interests remained even with the friendly Sirisena-Wickremesinghe government in power in Sri Lanka.

The country has a history of taking independent decisions even if they cause misgivings in India. The earlier government treated our concerns about China’s increasing presence on the island with “strategic autonomy”, pursuing, as usual, a balancing approach. It handed over the Hambantota port to China on a 99-year lease, erasing a $1 billion debt. This decision has echoed powerfully internationally by exposing the dangers of a debt trap and ceding territorial sovereignty that accompanies China’s Belt and Road Initiative (BRI).

Nevertheless, Sri Lanka continued to endorse the BRI, with former PM Ranil Wickremesinghe attending the BRI Forum in China in May 2017. With India, however, he had to back down in the face of striking workers on a joint venture agreement with Sri Lanka to handle 84 oil storage tanks at Trincomalee, an important infrastructure project.

Now, with the Rajapaksa brothers in power as President and Prime Minister (a curious situation in any democracy), India has its diplomatic challenges worked out. The beginning has been good. The Rajapaksas have acknowledged that India has not interfered in the recent elections. Indian diplomacy has been very nimble-footed, with the External Affairs Minister (EAM) visiting Colombo immediately after the elections and inviting the new President to visit India, which he will on November 29 and 30. The first visit abroad by Gotabaya Rajapaksa to India has its own symbolic significance, translating into a diplomatic gesture his statement to the EAM that while China is a trade partner, India is a relative.

The competition thrust by China on India in Sri Lanka will, however, not abate in the years ahead. Sri Lanka is a lynchpin in China’s Indian Ocean maritime strategy. If China’s conduct in Nepal to eat into India’s vital strategic space is a pointer, its strategic investment in Sri Lanka being even more important to it geo-politically, Beijing will continue to court Colombo through infrastructure investment.

Having seen a pro-China government replaced by a pro-India one in the Maldives, Beijing may feel compensated by the election results in Sri Lanka.

China’s foreign ministry spokesperson has expressed hope for “high-quality BRI cooperation” with Sri Lanka in the years ahead. Sri Lanka will continue to need investment to revitalise its economy. While India will play its part, Colombo will continue to look to Beijing. 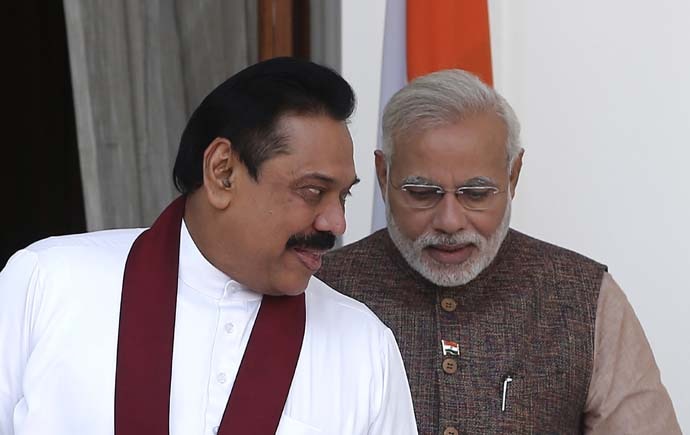 India has diplomatic handicaps in Sri Lanka that China does not. The Tamil question is a sensitive one in bilateral relations. The recent elections point to political polarisation in Sri Lanka, with the Sinhala community voting in a great majority for Rajapaksa’s Sri Lanka Podujana Peramuna Party and the Tamil and Muslim communities in the North and the East voting overwhelmingly for Sajith Premadasa of the United National Party.

Given Gotabaya Rajapaksa’s role as defence minister in Mahinda’s government in the LTTE’s elimination and charges of war crimes and human right violations, this polarisation raises questions about the course of domestic politics ahead, with a bearing on India-Sri Lanka relations. Western pressure on the new government on human rights issues may place India in a delicate position. The EAM has, during his recent visit, conveyed to President Gotabaya Rajapaksa India’s expectation that his government will proceed with national reconciliation, with a solution that meets Tamil aspirations.

The President’s own statement after victory reaffirmed that he will be the President of all Sri Lankans without creating a distinction on whether they voted for him or not, and that he is committed to ensuring the development of the northern and eastern provinces in partnership with India. These are, of course, the right words for the occasion and do not necessarily guarantee what happens next. The Tamils would be concerned at the choice of Anuradhapura as the venue for the President’s inauguration and General Gunaratne, reputedly the scourge of Tamils in the war, as defence minister. Our challenges in Sri Lanka will continue, but we are off to a good start with the new government.