Covid has pushed Sri Lanka to the verge of bankruptcy in 2022: The what, why and how

Sri Lanka's economic crisis might soon turn into a financial and a humanitarian crisis if permanent essential steps are not taken.

Sri Lanka does not seem to be happy about the kind of the year they seem to be entering into in 2022. The international pandemic has left a deep scar in the lives of Sri Lankans, who have primarily depended on tourism for their nation to prosper. But that's not all, because other domestic troubles seem to be compounding these effects too. Here's a look at the three most crucial items that the Mahinda Rajapaksa government needs an immediate permanent solution to:

Let's look at these in detail: Rajpaksa announced a ban on all fertilisers and pesticides in May 2021, and forced farmers to go organic without a proper warning or training on how to use alternative products. With lack of options, many farmers did not go for alternative methods of fertilisation to combat weed and prevent insects. Due to fear of losses, some farmers did not cultivate crops at all.

This transition had both positive and negative consequences for Sri Lanka:

1. It saw a drastic reduction in suicide rates, as ban on toxic pesticides meant no more access to pesticides that usually account for 15-20% of suicides in low and middle income countries.

2. It gained global attention as a leader in organic farming

But this also sent the economy on a downward tailspin.

In October 2021, the government did a U-Turn and removed the ban on import of fertilisers to restart the historical farming practices followed by farmers. But since the government could not subsidise the fertilisers this time, the farmers are unwilling to invest in fertilisers fearing that they would not make any profits. The lack of fertiliser usage for most of the year has created less crop produce than normal, leading to a drop in the food supply and causing prices to soar.

Sri Lanka saw a steep inflation of about 11.1% in November 2021, and the government has provided essentials like rice and sugar at the low prices. But that is helping people to a very low extent – people are forced to buy 100 grams of beans instead of 1 kg of beans, whereas 1 kg milk powder packets are being split and sold in portions because many cannot afford the rising cost of living.

#SriLanka Some has made a firewood cooker to beat the gas shortage. It looks like a face of the head of the ruling family! Peoples imagination has no limit. Satire becomes a force any society where free expression is suppressed. pic.twitter.com/txQgD2hYPR

This has caused the rich ones to contemplate over migrating to other countries. 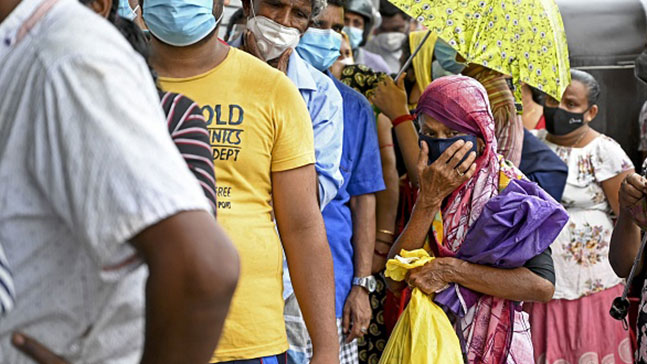 Sri Lanka owes US $5 billion to China, and recently borrowed an additional US $1 billion last year to aid its survival during the pandemic. In the next 12 months, Sri Lanka has to repay US $7.3 Billion  in domestic and foreign loans, but their forex reserves only have about $1.6 billion as on November 2021. So how is Sri Lanka managing its current repayments? Sri Lanka recently paid off Israel for its oil imports oil with tea. But will other nations be okay with barter like Israel? Only time will tell.

SO HOW IS SRI LANKA SURVIVING NOW?

The domestic gas cylinders that people purchase after languishing in long queues for hours in Sri Lanka are now exploding. The Govt Analyst’s report has revealed that the explosions have been caused due to change in composition pic.twitter.com/QAS9Wq1ESH — Being Yakin (@ItsYakin) November 26, 2021

1. Temporary relief measures include applying for credit lines from neighbouring countries to import essentials like food, medicines and fuel

2. Entering into currency swap transactions and loans with neighbouring countries

3. The government has banned unnecessary imports and has shut down 3 foreign embassies to cut costs

4. Ceylon Petrol Corporation, one of the government's refineries has been shut down as Sri Lanka is unable to import crude oil

#Loan, #Economic crisis, #Financial crisis, ##SriLanka
The views and opinions expressed in this article are those of the authors and do not necessarily reflect the official policy or position of DailyO.in or the India Today Group. The writers are solely responsible for any claims arising out of the contents of this article.