I'm an Indian Muslim. Why must I suffer the acid test and prove my patriotism?

We watch TV debates with hashtags that are openly anti-Muslim; we see ordinary Indian citizens with Muslim names being dubbed anti-national; we see Muslims who don’t really represent anything except their own selfish interests appearing on discussion panels; who make us cringe with their narrow and limited vision of Islam and the role of Muslims in the country.

They are perfect foils for the spokespersons of other faiths who rant and rave against Muslims; the most common refrain being how Muslims have four wives, 40 children and will soon overtake the Hindu population. But rants and raves don’t go hand in hand with facts and data. We hear and outrage much better than we read — we feel the need to “other” an individual, a community. It’s the new normal.

We very rarely see reasoned debates, where “normal” Muslim spokespersons can take on people representing other religions and put forward points based on the Quran and authentic Hadith, a record of the traditions or sayings of Prophet Muhammad. 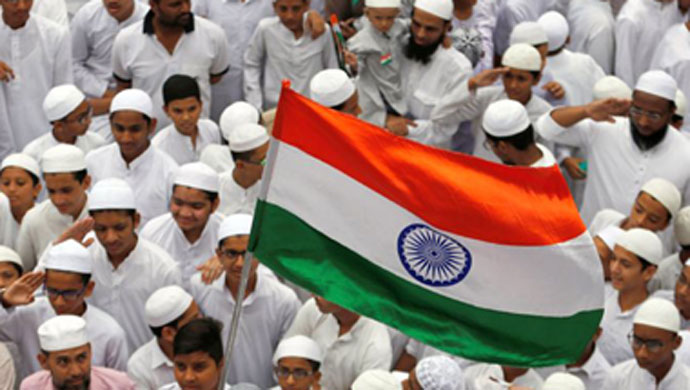 It’s the window of discourse and what is considered acceptable in public discourse. Photo: PTI

But then who wants to peruse them? We need to create “the other” and in some way or other, everyone is playing along with it. It’s so much easier to hate “the other”, the one who is not like us. We have taken the public discourse to such low levels that nothing surprises us anymore. It’s the “new normal”.

That perhaps is the cynical aim of the mainstream media. We are being fooled, influenced and pushed into believing that hate crimes and violence against minorities are the new normal. That minorities have only themselves to blame, so much so that in many cases the charges are framed against the victims themselves.

And this brings me to the Overton window.

What would have been radical, ridiculous or unthinkable a few years ago is now acceptable. It’s the “new normal”.

According to the Overton window, people don’t reject unthinkable ideas, they just get used to it.

Indian Muslims have been called “Pakistani” for decades now. There must be a very rare Indian Muslim who hasn’t been called one. What is frightening is that we have got used to it. Being called Pakistani is already an old but “new” normal.

We forget the contribution of Muslims in the freedom struggle. At every stage, Indian Muslims have sacrificed for the country — starting with Bahadur Shah Zafar who led Indian sepoys against the British East India Company in the first war of Independence.

We forget the contributions of those Indian Muslims who gave the following invaluable slogans that were the lifeblood of our freedom movement, many of them are used even today. Here, I have reproduced the few compiled by my friend, professor Ali Nadeem Rezavi, chairman, Centre of Advanced Study, Department of History, AMU, as they appeared on his Facebook wall:

That the Muslims who are in India stayed on because of their love for the country, because they rejected the two-nation theory and believed more in the idea of a secular India than Pakistan is beside the point. That they have contributed enormously to India is glossed over.

The “new normal” is to question their patriotism, to deny that they are equal citizens.

There’s a daily checklist for them. How many nationalistic slogans did Muslims raise today? The name of the game is whataboutery. That’s also the new normal. You can’t pose a question without being asked, “What about Malda?”

And how dare you speak of a time when Hindus and Muslims lived peacefully!

If you believe the alternate history being circulated on WhatsApp, it seems the communities were always at each other’s throats. The lie has been repeated so often that the people of the present generation actually believe that Muslims only looted India and killed or converted Hindus.

That economic and census figures belie these claims is irrelevant. Muslims are the villains. It’s the “new normal” to believe random, unverified WhatsApp posts and share them on Twitter and Facebook, adding “is it true” and deleting them much later, after the damage has been done.

On January 26, a group of Muslims had made arrangements for flag hoisting. This was disrupted by an unauthorised bike rally that led to communal clashes and the tragic death of Chandan Gupta. Many arrests have been made in the case and investigations are on.

On January 28, Bareilly district magistrate Raghvendra Vikkram Singh wrote an anguished Facebook post (that he later deleted) lamenting the fact that there is a strange tradition nowadays, of forcibly taking out processions in Muslim-dominated localities and raising anti-Pakistan slogans such as “Pakistan Murdabad”. He goes on to question the practice, asking why it is being done: “Are they (Indian Muslims) Pakistanis?”

He further adds that a similar incident was reported from Khailum in the district, where there was stone pelting and cases were registered.

But Muslims being asked to raise anti-Pakistan slogans is the “new normal”.

That ordinary Pakistanis are perfectly nice people just like us — as my friend Vivek Sengupta says, it is "Pakistan's military-intelligence complex whose agenda is to bleed India through a thousand cuts" — is immaterial. If you want to be a patriotic Indian Muslim, you must say “Pakistan Murdabad”.

This is communal polarisation at its worst and, in our times, it is happening in small or large doses everyday.

There is a video circulating on social media of a poor old Muslim man being beaten up and forced to say “Jai Shri Ram”. That it was proudly posted by a young man who sees no shame in beating up the elderly, or in perpetuating violence in the name of Ram, is an echo of the “new normal”.

That Ram himself would be the first to condemn such violence perpetrated in his name is irrelevant. Hatred and frustration have found an outlet.

The tragic death of Ankit Saxena, who fell in love with a girl from the Muslim community and was allegedly killed by the girl’s father, is another example.

We have to stop fanning hate. We are taking bigotry in public discourse to such terrifying levels that the fallout would invariably be violent hate crime. We have to speak out.

But those who do are ridiculed and attempts made to discredit them. Liberal and secular are seen as words of abuse. Moderates and liberals don’t fit into anyone’s agenda for they prevent polarisation, and votes are gained based only on this plank — by stoking the fear that “your religion is in danger”.

Since I speak out against polarisation of every kind and write on multiculturism, I face abuse almost daily on Twitter and have learnt to mute or block it.

People who would, in person, have spoken to me respectfully given my age don’t think twice before hurling abuse, at times calling me “Jihadi Aunty”, some even suggest rather kindly that I become an ISIS sex slave. According to them, only then will I appreciate my country.

And, unfortunately, even I am getting used to it. They are just faceless, nameless trolls, I tell myself. It’s the new normal.

That I returned after living many years abroad because I believed in my country, or that my grandparents and parents opted to stay in India at the time of Partition despite being offered very lucrative government positions in the then newly-made Pakistan, does not matter.

Hatred, of course, knows no reason.

I am doubly blessed to be abused by both sides of the spectrum. I was brought up to believe that God is everywhere. Everything is His creation and you just have to close your eyes to see Him, feel Him and pray to Him.

There are those who feel I should not talk of ganga jamuni tehzeeb, should not visit temples and churches which I — as a practising, believing Muslim — have done since childhood and which is a part of my heritage as an Indian Muslim; that I should rant against my beloved country and forget that I was raised an Indian in whose DNA the fragrance of her country’s mitti is embedded.

They call me names, too, but of course they are more polite and subtle: probably because for me, most of them are not faceless trolls. I have met and interacted with most of them in the 10 years that I have been on Twitter, and when times were gentler.

Now, of course, you can either be with me or against me. It’s the new normal.

Attempts are now being made to make hate crimes acceptable. So while we talk of Muslims in the context of four wives, of halala, of instant triple talaq, we rarely talk of justice for those who have been the victims of cow vigilantes, of innumerable hate crimes. Those are real people who are now dead. And death does not see religion and caste. Bodies pile up on both sides, it’s just that one community is made to suffer much more. It’s the new normal.

Chalo since no one is doing I will track the hate speech of our elected reps in 2018. Help if you want.

Recently, AIMIM president Asaduddin Owaisi raised a point in Parliament saying that those who call Indian Muslims “Pakistanis” should be jailed for three years. While I agree there should be a deterrent against questioning any Indian’s commitment and integrity towards his/her country, I feel setting such a punishment will only provoke more hatred, resentment and hate crime. It will be counter-productive. Instead of preventing one crime, it will lead to more as hatred ferments internally. God forbid, it will all explode into communal riots.

What we need to do is stop the polarisation, stop the creation of the other, stop joining the chorus of communal forces on both sides — that will only lead India towards the path of destruction.

We have to stop getting used to hate speeches and hate crimes.

We need to speak up against it.

We need to punish those who make hate speeches, commit hate crimes.

We need to have stricter laws for hate crimes.

We have to stop defending them on debates with “ifs and buts”.

We need strong government action against public figures that say “Muslims should not even be living in this country, they should go to Pakistan or Bangladesh”.

And I am only quoting the latest.

We need to stop distracting people from questioning “vikas” by fanning bigotry. Hatred consumes those who spread it too, not just the intended victims.

We need to stop TV debates that openly polarise. That fire, the “burning question” at the bottom of the screen, can spread upwards too. Then it will consume much more than screen time.

172 million Muslims who are Indian citizens can’t be made to feel like “the other”.

And yes, I’ve already become used to getting trolled. So bring it on. Don’t disappoint me.

It’s the “new normal”, except that it is neither normal nor should it ever be.