The party comes across as averse to non-Nehru-Gandhi dynasty members gaining prominence.

On Sunday, October 21, Prime Minister Narendra Modi hoisted the national flag at the Red Fort. The event was organised to commemorate the 75th anniversary of the proclamation of the Azad Hind government in Singapore by Subhas Chandra Bose. The political significance of the event was not lost on anyone.

Netaji had promised an India where everyone has equal rights&equal opportunities. He had promised a prosperous nation which was proud of its traditions, development in all areas. He had promised to uproot 'divide & rule'. Even after so many yrs those dreams remain unfulfilled: PM pic.twitter.com/SwrxDR54d0

Like the yet to be completed National War Memorial, the Police Memorial was long-awaited. The 30-feet tall, 238 tonne-heavy black granite sculpture, a museum and wall of valour bearing the names of 34,800 martyred police personnel is awe inspiring. It is a much-deserved tribute to the police and paramilitary force whose contributions and sacrifices often go unseen and unsung. At the Police Day ceremony, the Prime Minister also declared the institution of an award in the name of Netaji Subhas Chandra Bose for the National Disaster Response Force personnel. The role of the NDRF at times of natural calamities and man-made emergencies is rarely recognised. So, a laudable move indeed.

No doubt, there was a political agenda underlying both the functions. PM Modi did not miss the opportunity to score his points. At the Police Memorial inauguration, he asked, “Why did it take 70 years after independence for the memorial to come up?”

PM Modi was more direct in his Red Fort speech. He said that the contribution of leaders such as Netaji Subhas Chandra Bose, BR Ambedkar and Sardar Patel have been "obliterated" in mainstream Indian discourse to "magnify the presence of one family".

On earlier occasions, he had declared, BJP would honour great personalities neglected by the Congress, who played a role in the independence struggle and nation building.

The reactions were on expected lines. There were loud cheers from BJP supporters across the country. The Congress came down heavily on Narendra Modi and the BJP. It accused them of trying to appropriate national icons like Subhas Bose, Sardar Patel and Ambedkar.

It is not a mere coincidence that Patel’s statue of unity, Ambedkar Memorial, Police Memorial and now recognition to Bose from Red Fort is coming from a BJP government, all in the same tenure. But in being over-defensive about it, the Congress is scoring self goals.

First, if the Congress had not left gaps wide open in public memory for these giants of the freedom struggle, there was no way for the BJP to sneak into that space. The fact that it has to contest BJP’s claims itself concedes the point.

Second, no one can have proprietary rights over national heroes. It is pointless to argue about the role of the Rashtriya Swayamsevak Sangh (RSS) in the freedom movement. As Indians, they are as entitled to stake claims to the legacy of these greats as Congress or anyone else for that matter. Congress is being naive in disparaging the efforts. For example, they mocked the Statue of Unity saying it was “Made in China”. In doing so, far from undermining the BJP, they are in fact further slighting these personalities. That reinforces the impression of the Congress being averse to any non-Nehru-Gandhi dynasty members gaining prominence.

Finally, the Congress itself can be accused of convenient “appropriation”. The present Congress is in no way the natural successor of the Indian National Congress formed in 1885. It was a breakaway group created by Indira Gandhi. It is another matter that the original Congress was decimated over time. But, that does not make the new INC its only legitimate inheritor. 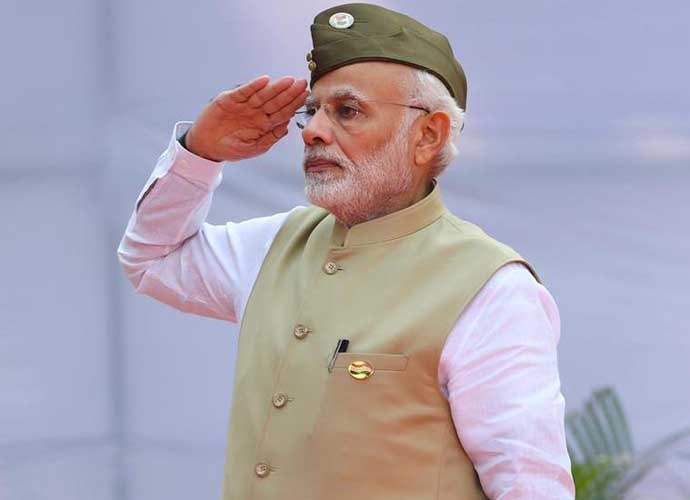 PM Modi did not miss the opportunity to score his points. (Source: India Today)

Some very disingenuous arguments are being put forth on why the BJP cannot seek association with the likes of Bose. For example, it was said that the Congress had fielded it top lawyers such as Bhulabhai Desai to defend the INA undertrials. Ironically, the other day, Sonia and Rahul Gandhi’s lawyers in a Delhi court objected to being called “Congi lawyers”. They said they are not Congress lawyers but professionals.

Subhas used so many Urdu words for official purposes. Never used BharatMataKiJai or BandeMataram as slogans but only JaiHind. All this led Savarkar to label him a JihadiHindu

One can argue about how she can be so sure that he would have used those words today. But without getting into that may one ask – how was her dear late mother honoured during her lifetime and when she died in 2012?

Yes, indeed Subhas-babu used Urdu words for official purposes. But, then his vision was one of united India and I doubt if he would have ever endorsed partition.

The idea is not to quibble over details. In any case, the debate is not about how Subhas Bose and his INA comrades were treated before Independence. But, the place Bose, Patel, Ambedkar and others got in India’s history written after 1947.

While Congress is being prickly, other Opposition parties have not shown any sensitivity towards these moves by BJP. For example, Mamata Banerjee tweeted on the occasion of the Azad Hind Government formation’s 75th anniversary.

Today is the 75th anniversary of the formation of the Azad Hind Government. My heartfelt tribute to all the brave soldiers of INA who fought for India’s freedom under the leadership of Netaji. Jai Hind.

This is a gracious, albeit tacit, acknowledgement of the fact that there is room for everyone to celebrate Bose’s legacy. There is little point in being possessive or protective about a common turf.

Congress still seems to be missing the bigger picture by thinking it is only about Modi and BJP. Life in India has moved beyond the dynasty and cannot also be captured by a single individual or family anymore.

What Modi and BJP have succeeded in to a large extent is to open up the closed doors. Social media has ensured that narratives cannot be set unidirectionally. Delhi cannot control the news flow anymore.

Sabrimala is causing ripples across the country like never before. Name change of Allahabad to Prayagraj is not of interest for people of the Hindi heartland alone. The INA raising day celebrations in Delhi is being shared on social media across the world.

Historical assumptions can be challenged from all corners. Whether one likes it or not, alternative ecosystems are being created. More importantly, they are here to stay with or without Modi and the BJP.

Parties like the BSP have already claimed its own icons. All others have their own idols or models of identity politics. The ideologically agnostic and religion-neutral middle ground is up for grabs. But, no one can have monopoly rights over it. It has to be a shared inheritance.

The Congress cannot hope to come back to power on its own in the foreseeable future. If it can form a government through a mahagatbandhan, it will be despite Rahul Gandhi rather than because of him.

It is time for the Congress to accept the new reality with grace. Get off its high horse to join the party as one among equals rather than as royalty.

Also read: Why I think the Indian flag should be unfurled from Red Fort on October 21

#Narendra Modi, #Statue of Unity, #Sardar Patel, #Azad hind government
The views and opinions expressed in this article are those of the authors and do not necessarily reflect the official policy or position of DailyO.in or the India Today Group. The writers are solely responsible for any claims arising out of the contents of this article.