#NehruSnooped: So what if Subhas Chandra Bose had ties with Nazis?

The freedom fighter's attempt to end the British Raj with the help of Germany was no reason to spy on him, like Nehru did.

The implosion of #NetajiSnooped scandal on the national scene more than two weeks ago with an India Today cover story continues to have after-effects across media, mainstream and social. Rattled by the disclosures, certain aggrieved, inspired parties are offering counterpoints which, in my estimate, are diversionary, irrelevant and even preposterous. The World War II vintage, British Raj-era artifice of clubbing Bose with the evil Nazis or the “war crimes” of the Japanese so that he could be shown in unflattering light is being utilised to sidestep the issues germane to the whole controversy.

What Bose did during the extraordinary time of World War II gave no one in India a licence, five, ten or 20 years later, to intrude into the privacy of his near and dear ones. Under no circumstance would a democratic polity tolerate misuse of intelligence agencies meant to go after enemies of the state. Spying on former freedom fighters and patriots, journalists and even (as reported later in Mail Today) passing on illegally gathered information to former colonial masters would be completely unacceptable. It would be outrageous today and would have been more so back then when, we are told, we were ruled by great democrats — moral giants, the likes of whom we would never see.

Inversely speaking, justify or gloss over this blatantly illegal misconduct, as some eminent thinkers are shockingly attempting to, and you stand on the side of Richard “Tricky Dick” Nixon. What else was the Watergate scandal if not a snooping matter?

A case in point is of a harangue appearing in a national newspaper. In it, Bose is sought to be painted as a wannabe “dictator”. 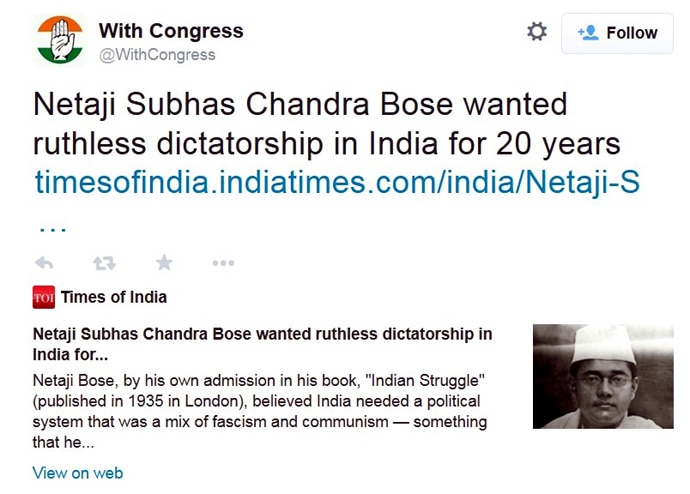 If the writer had dug deeper, he would have found out that Bose had also used this term for Gandhi, many a time. And Gandhiji had used it for himself during the Khilafat days — because unquestionable obedience to one was a prerequisite to taking on a powerful enemy. All the Congress leaders fell in line.

Anyhow, what concerns me more in the article is the dismissal as mere “allegations” of the snooping revelations, which were based on proper, legally tenable, verifiable documentation available at the national archives in New Delhi, United Kingdom and elsewhere.

These “allegations”, the writer goes on to hallucinate, are being used by “conspiracy theorists and spin doctors... to push their agenda — that Netaji was a greater patriot than Pandit Nehru”. Then an attempt is made to demonstrate that Nehru being an anti-Nazi was actually a greater patriot than Bose who was pro-Nazi. “Bose’s admirers conveniently ignore his Faustian treaty with Nazi Germany and the Empire of Japan”, we were reminded.

For the sake of argument, even if one is insisting on contextualising the entire discourse to Bose’s association with the Nazis, it must be emphasised that all that the Indian National Army leader did was not remarkably different from what successive Indian leaders would do from 1947 onwards. Whatever is good for the goose has to be good for the gander. In national interest one will go to the extent of shaking hands even with the devil. This is the golden rule governing our imperfect world. Subhas Chandra Bose wasn’t a United Nations messenger of peace. Gandhiji, incidentally, for whatever reasons, never received the Nobel Peace Prize. Dr Henry Kissinger did, so did Yasser Arafat.

Subhas wasn’t an intellectual or a hack pontificating sanctimoniously about how things should be. His priority was to secure freedom for Indians in circumstances that were rather extraordinary. Show me a diplomat or an intelligence officer slamming Netaji’s tactics in the name of morality, and I will splash pictures of our past prime ministers with many of the world’s worst dictators! The following specimen is an advance offering.

For those wanting to change the world, make it a better and peaceful place, the doors of Amnesty International, the United Nations or, better still, some university in London or Washington are always open. For those engaged in statecraft with the sole, sacred purpose of taking their nation forward — even at the cost of others — there is only but one yardstick: My nation always comes first.

Let’s get a little specific here. In a letter written to Nehru in 1939, Bose outlined that “foreign policy is a realistic affair to be determined largely from the point of view of nation’s self-interest...frothy sentiments and pious platitudes do not make a foreign policy”.

A German once pointed out to me that before he joined the Axis, Bose had opposed Nehru’s idea that the European Jews could be given sanctuary in India. I submitted that most Indians of that time couldn’t think of anything else except their own emancipation. On a personal level, Bose was as much humane and enlightened as any other Cambridge alumni like him. Between 1933 and 1939, for example, he had for friends Kitty and Alex, a sensitive, newly married Jewish couple in Berlin.

The couple went to the US and from her Massachusetts home in 1965, Kitty Kurti wrote a tribute for “Netaji”. She reminisced that Bose “did not attempt to hide” from her his deep contempt for the Nazis. In the same vein, he cited India’s exploitation by British imperialism and explained why he had to do business with the Nazis. “It is dreadful but it must be done. …India must gain her independence, cost what it may,” he told the couple after a meeting with Hermann Göring.

When the first gas chamber went into operation, Bose — completely unaware of its existence — was in southeast Asia. The allies knew, but kept mum till about the end of the war. There will be time to get into the question of wars and war crimes — of heart-rending accounts of torture and death brought upon the INA men by the colonial British (of them, innumerable were good people) and their Indian collaborators — Winston Churchill causing millions of Indians to starve to death.

But it would be suffice to state here that there is sufficient data on record, including the statements of Britishers who ran India prior to 1947, to demonstrate that Bose’s attempt to end the British Raj in India with the help of Axis powers did lead to a degree of success, which had hitherto eluded the freedom fighters treading the path of ahimsa.

The bottom line is that India’s larger, long-term interest mattered foremost to Bose. If I may say so, also to Nehru, the prime minister. His idea about bringing European Jews to poverty-stricken India was airy, unworkable and only good for grabbing headlines.

So long as Nehru and his family ruled India subsequently, I told the German, Israel was not even allowed to open its embassy in New Delhi.

#Netaji, #Netaji Subhas Chandra Bose, #Nehru Snooped
The views and opinions expressed in this article are those of the authors and do not necessarily reflect the official policy or position of DailyO.in or the India Today Group. The writers are solely responsible for any claims arising out of the contents of this article.