'No If, No But, Only Jatt': But will the Jat plus glamour mix of stars Dharmendra and Hema Malini actually help Sunny Deol in politics?

Dharmendra and Hema Malini have each had starry but stormy political innings thus far. As Sunny Deol now enters the raajneetik fray, will he call upon their appeal or go it his way?

It was Gurdaspur that paved the way for stepmother Hema Malini to enter politics. The big question is whether Hema Malini will campaign for fellow BJP-wallah and ‘abhineta-turned-neta’ Sunny Deol in Gurdaspur now.

Hema, the actress-dancer, who has been permanently slotted as a bankable star campaigner for the BJP, is free as her own constituency, Mathura, had its voting on April 18. Hema Malini is free as voting in Mathura is done. Will she spare some time for Sunny Deol in Gurdaspur now? (Source: India Today)

Gurdaspur goes to vote on May 19.

Twenty years ago, Hema had arrived in Gurdaspur to campaign for her co-star and BJP candidate, Vinod Khanna, for the 1999 General Elections. That marked the beginning of her political sojourn, during which crowds gathered to see the star. She did not disappoint, regaling the mesmerised audience with her memorable ‘Basanti’ (the garrulous character she played) dialogues from the blockbuster film Sholay. At that point, she had not nurtured any serious ambitions of joining politics — but with Khanna’s campaign proving a huge success, the BJP approached her to campaign in other states as well.

Hema’s ties with Sunny Deol have apparently been rather strained. After his reported second marriage with Hema in 1979, Dharmendra kept oscillating between the two families and managed, for the most part, to maintain a fine balance between them. However, it was always Hema Malini at the forefront as a parent for her two daughters from Dharmendra. The rift between the two families had come out in the open when Sunny and Bobby Deol did not show up at Ahana’s wedding, especially after Hema Malini had proudly declared that Dhamendra’s sons would be present on the occasion. Sunny and Bobby Deol did not show up at stepsister Ahana’s wedding. (Source: Twitter)

A few ludicrous media reports then claimed that the two actors had chosen to skip the wedding because they were camera-shy, while others suggested that the Deol siblings were concerned that by attending the event hosted by the ‘other woman’ in their father’s life, they would hurt the feelings of their reclusive mother, Parkash Kaur. Dharmendra with Parkash Kaur and their sons Bobby and Sunny Deol. (Source: Twitter)

Sunny would have more problems at hand if he and his parent organisation requisition the services of his father, Dharmendra, to campaign for him.

Dharmendra is a living legend in Punjab — a handsome icon of masculinity and a famous Jat from Punjab. Dharmendra has been a politician too, having served Bikaner for five years between 2004 and 2009 as a Lok Sabha MP.

But his real-life neta role has hardly been inspirational or vote-catching. Dharmendra won Bikaner in 2004 but was not too enamoured by Lok Sabha politics. He reportedly had set his eye on a ministerial post, in case the National Democratic Alliance (NDA) returned to power. The Sonia Gandhi-led United Progressive Alliance (UPA) surprised everyone, however, by toppling the Atal Bihari Vajpayee government. Dharmendra did not enjoy the prospect of being a mere MP. All through his five-year tenure, he hardly ever attended Parliament. He had no interest in the BJP either.

Speaking from Bikaner to Aaj Tak news channel on April 17, 2004, in response to Congress leader Naval Kishore Sharma’s allegation that the actor had not mentioned the assets owned by Hema Malini in the affidavit submitted while filing nomination papers from Bikaner Lok Sabha, Dharmendra declared that he didn’t know anything about the BJP’s political philosophy’ — and added for good measure, “All I know is that if I were to be dictator for five years, I would clear up this mess.”

The BJP was quick to defend his comments. BJP spokesman Prakash Javadekar told Rediff.com then, “What is wrong with this kind of statement? Balasaheb Thackeray has been making similar statements for several years.”

Dharmendra acknowledged before voters in Bikaner that the public often regarded him as the character he played in many films — a law enforcer who fought to combat and vanquish the corrupt and the evil. During many of his street-corner campaign meetings in April 2004, he would come up with sweeping statements like, “When you elect me, I will solve all your problems. I will stand on the top of the Houses of Parliament, and shout ‘People of Delhi [the Government of India], if you don’t listen to me, I will jump!’” 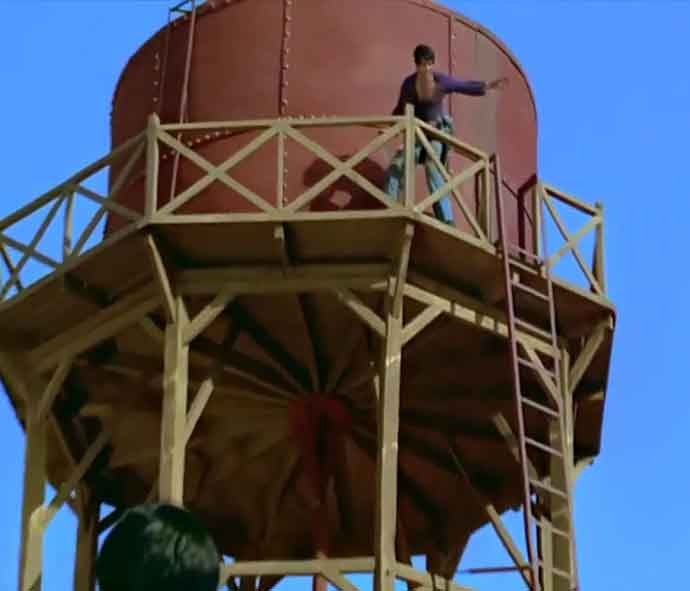 'Gaonwalon!' Dharmendra in the iconic scene from Sholay. (Source: Still from the movie Sholay)

This was an allusion to his wildly popular dialogue in the comical feigned suicide scene in Sholay — regarded by the masses as a highlight of his performance.

Many political analysts and commentators feel Dharmendra, the politician, may cause more harm to Sunny Deol, particularly when he is pitted against a seasoned Jat leader, Sunil Jakhar, who is well-versed with not only Punjab politics, but played a key role in dealing with agrarian issues.

In Mathura, some locals feel her attention has been more focussed on her next film project or dance performance than on Mathura’s socio-economic issues. The contest for the Mathura seat in 2019 has the Iyengar Brahmin from Tamil Nadu, riding on the Narendra Modi factor, aiming to trounce the Jat power of the Rashtriya Lok Dal (RLD).

In politics, three years later, voters in Mathura had no real expectation that she would focus on the needs of her constituency the way other MPs do for fear of losing the trust of either the high command or the electorate. Perhaps they had reason to believe she would survive and sail through all, regardless of her contribution — since her entry into the BJP, Hema Malini has been pampered right through the party’s transition from the Advani to the Modi regime.

Cultural commentator Anil Dharker once explained to the BBC World Service’s Outlook programme that while some actors often appeared merely as warm-up acts preceding a political speech, others, such as Dharmendra, had stood for Parliament in their own right.

In 2008, actor-MP Dharmendra had told PTI, “I won’t say that coming into politics was a mistake, but yes, an actor should not come into politics as it divides audience and general acceptance among fans. An actor should always remain an actor. For me, the love and support I got all these years from my fans is the greatest achievement.” Dharmendra made rather controversial statements during his stint in Parliament. (Source: India Today)

When criticised for his absence from Parliament and his constituency Bikaner, he had retorted, “Who says that? I am always in touch with the problem of my constituency. From cleaning up Sur Sagar, a dumping ground in Bikaner, to minimising [reducing] school fees for children, renovation of the theatre Rangmanch, and building bridges, I am trying to solve each and every problem.” The actor added, “My office in Bikaner apprises me of the demands of the people on a regular basis. I am from a farmer’s family so I understand their problems. And this is no politics. I am an emotional but a tough person, these [such] criticism can’t break my intention [resolve]. I never did anything to grab attention, either in acting or politics.”

Hema Malini continues to bask in the newfound glory of an actor-politician. “I felt grateful that after loving me all these years as a film star, they [the crowds at election meetings] were placing the same faith in me as a political leader,” she acknowledged to her biographer Bhawana Somaaya. “I felt responsible towards them and did not want to let them down. This was my first close interaction with my fans and it was both exciting as well as frightening. Gradually, I learnt to cope with it. I discovered that politics is a different world altogether and calls for a lot of hard work.”

As Sunny Deol will realise with the passage of time, life in politics is a bumpy ride — something Hema Malini learnt when Prime Minister Narendra Modi chose to visit her constituency Mathura on May 25, 2015. Adorned with jewellery made from mogra flowers — a decision that did not go down well with the locals — she had just about settled herself at the event when the organisers demanded she deliver a speech. Completely unprepared, she mumbled a few sentences in Hindi— but the crowd soon lost patience and Modi arrived in the nick of time to rescue her.

In July 2015, her car would meet with an accident in Dausa, Rajasthan, leading to the death of a four-year-old girl, one of the passengers of the other car involved in the mishap. The actress, who had sustained injuries, was immediately driven to the hospital. But she was quick to reportedly blame the dead child’s father, the driver of the other car, for the collision, thereby provoking outrage for her insensitive comments. Hema Malini faced criticism for her remarks to the father of a child who died after an accident with a car in which she was travelling. (Source: PTI)

In spite of the general rancour she has invited through her actions, she is unlikely to be unduly concerned about the stability of her position in Mathura. She has probably not forgotten how she had won the seat by a margin of more than three lakh votes against Jayant Chaudhary in 2014 — her eternal ‘dream girl’ persona made the victory possible, with a little help, of course, from Dharmendra’s Jat identity and a great deal of the Modi factor.

From her point of view, her position probably seems unassailable, at least for now.

Will Gurdaspur accord a similar position to Sunny Deol?

The May 23 verdict has a lot in store, including peoples’ mandate on abhineta-turned-neta dynasties. The Bachchans have had three Parliamentarians — poet Harivanshrai, Amitabh and Jaya Bachchan — but only one from the Lok Sabha.

The Dutts have had three — Sunil Dutt, Nargis and Priya Dutt, two from the Lok Sabha.

The House of the Deols has a chance to create a record of sending three Parliamentarians — all directly elected to the Lok Sabha!