Not so ‘Sunny’ for Deol in Gurdaspur

Only the verdict on May 23 will determine whether actor Sunny Deol’s Punjab sojourn was more than just a photo opportunity.

A few days into his curious campaign for the Lok Sabha poll in the border constituency of Gurdaspur, the film actor-struggling-to-fit-in-as-a-politician, Sunny Deol, appeared at a complete loss for words when a young TV reporter asked him whether the Balakot air strikes would benefit the Bharatiya Janata Party. “I don’t know about such things. I am here to win and to strengthen Modi-Ji,” was his incredulous response.

The 59-year old Deol, who to his credit has delivered a few Bollywood blockbusters in his time, believe it or not, had no inkling that the Indian Air Force had struck a terror camp deep inside Pakistan in retaliation for the dastardly car bombing in Pulwama on February 14. He is simply not cut out for politics, Deol’s father, film star Dharmendra, said in Gurdaspur even as he set out in support of his older boy. “I told Sunny that politics is a very difficult thing,” he said, evidently speaking from the experience of his own brief foray when he contested the 2004 Lok Sabha election for the BJP from Bikaner in Rajasthan.

Sunny is, to say the least, self-admittedly clueless regarding local issues and problems in Gurdaspur, the constituency he seeks to speak for. So, while he himself spurned rival Congress nominee Sunil Jakhar’s invitation to a debate on local issues, Dharmendra rather candidly let slip what the real reason for Sunny’s bashfulness was: “Sunny cannot debate. Sunil has [political] experience and his father was a politician too. We have not come here to hold debates,” the father said on May 11.

So, instead of addressing issues, the actor is relying on his filmy avatar. His always brief campaign speeches are generously laced with dialogues from his movies.

The crowds love it. But will it be enough to bring them out of their homes and press the button next to the saffron lotus when Punjab goes to the polls on May 19? It isn’t quite evident as yet.

Meanwhile, Dharmendra has been singing a curious tune since he arrived in Gurdaspur. Besides claiming to have “great respect” for chief minister Captain Amarinder Singh’s ancestors, who “were the first to surrender the erstwhile Patiala state to Sardar Patel,” he claimed he was kept in the dark about the fact that Sunny would be contesting against Sunil Jakhar, who is “the son of Balram Jakhar with whom I had great relations.” 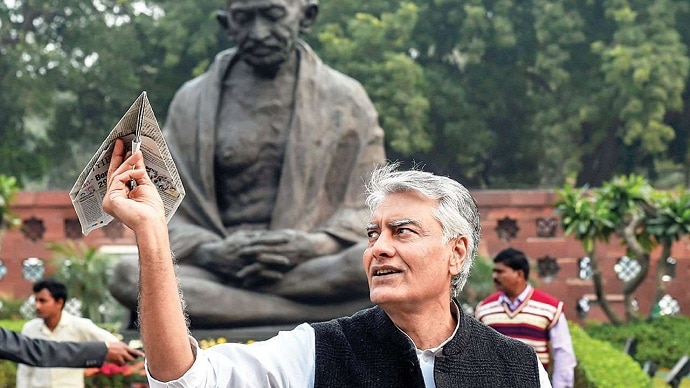 Dharmendra said that he would have never permitted his son Sunny to contest if he knew the opponent was Sunil Jakhar. (Photo: PTI)

The veteran actor said he would have never permitted his son to contest if he knew the opponent was Sunil Jakhar. “He (Sunil) is like my son,” he said. It’s all been cause for great amusement in the Congress camp.

In the end, addressing electors on Saturday, Captain had this to say: “Get your selfies and say bye-bye to him (Deol).” But only the verdict on May 23 will determine whether Sunny’s Punjab sojourn was more than just a photo opportunity.

Also read: Why Khali campaigning in Kolkata is too much for a faint-hearted Bengali!