In an unprecedented move, the four topmost judges of the Supreme Court - justices Jasti Chelameswar, Ranjan Gogoi, Kurien Joseph and Madan B Lokur - called a press conference in order to put forward before the nation issues about “survival of the institution of judiciary” and “democracy” in India.

The impromptu press conference not only called into question the “assignation” of benches on certain cases by the “master of the roster” CJI Dipak Misra, but also hinted at, in no uncertain terms, that there’s something wrong with the judiciary in India, and that it must be fixed for democracy to survive.

It seems vital issues concerning corruption in India’s higher judiciary will get addressed in this unprecedented move by four supreme court judges. pic.twitter.com/WaMByZv9Ac

#JudgesPressConference - The assignment of this case is what triggered todays press conference amongst assignment of other cases. https://t.co/RYPipALrHx

The press conference held at the leafy lawn of Justice Chelmeswar’s residence at 4, Tughlak Road, pertained to two main cases, the justice Loya reinvestigation case and the National Medical Council row, and the four SC justices raised questions that directly involve the conduct of none other than the chief justice of India, Dipak Misra. The four justices handed over a letter that they had written to the CJI sometime back, and said that their purpose of calling the press was to draw attention to the grievances they had issued in the assignation of the benches.

While the “vital issues” pertaining to alleged “corruption in India’s higher judiciary” as well as the need to be seen doing justice to a late brother judge (Brijgopal Harkishan Loya), were the pegs to the press conference, this move has also been seen as a well-thought out move by the judges against what it seems to be a concerted attempts to push certain issues under the rug. The presence of senior advocates like Indira Jaising added to the atmosphere of judicial rebellion at a time when almost every institution in the country is witnessing churns unseen since the Emergency.

Grievances against the CJI

Justice Chelameswar said that the attempt to collectively persuade the CJI was undertaken for months, but to no avail. “Remedial measures” were suggested, and that “the administration of the SC is not in order”, “many things which are less than desirable have happened in the last few months” were spoken about.

With no pleasure we are compelled take the decision to call a press conference. The administration of the SC is not in order & many things which are less than desirable have happened in last few months :Justice J.Chelameswar pic.twitter.com/yv2Dmuexj0

While Justice Gogoi confirmed that one of the issues was the matter of judge Loya, whose death has been called into question by an investigative report citing the family’s deep grievances, the press showered the justices with questions on a number of issues. However, when the press asked if the CJI should be “impeached” on these grounds, justice Chelameswar said, “We’re no one to impeach”, and it’s a matter that should be decided by the “nation”.

Press - Will CJI Be impeached?justice Chelameswar - We are no one to impeach

Press - Is this a sign of no confidence against the CJIJustice Chelameswar - Dont put words in our mouth.

It is Justice Loya’s case. The judges — the four most respected judges this morning went to the CJI questioning the allocation of justice Loya’s case to a man of questionable reputation — and eventually Justice Loya case was withdrawn by petitioners crying they don’t have trus

What the letter said

The letter, originally written to CJI Dipak Misra, handed over to the members of the press by the four SC justices, says that “rules have not been strictly adhered to”, “lead[ing] to unpleasant and undesirable consequences of creating doubt in the body politic about the integrity of the institution”. The matter of appointment of appropriate benches and judges needs “corrective measure”, the letter says.

Matters of far reaching consequences assigned by CJI to benches of "their preference", Four Supreme Court judges in their letter to CJI. @barandbench pic.twitter.com/fTrEoErgf6 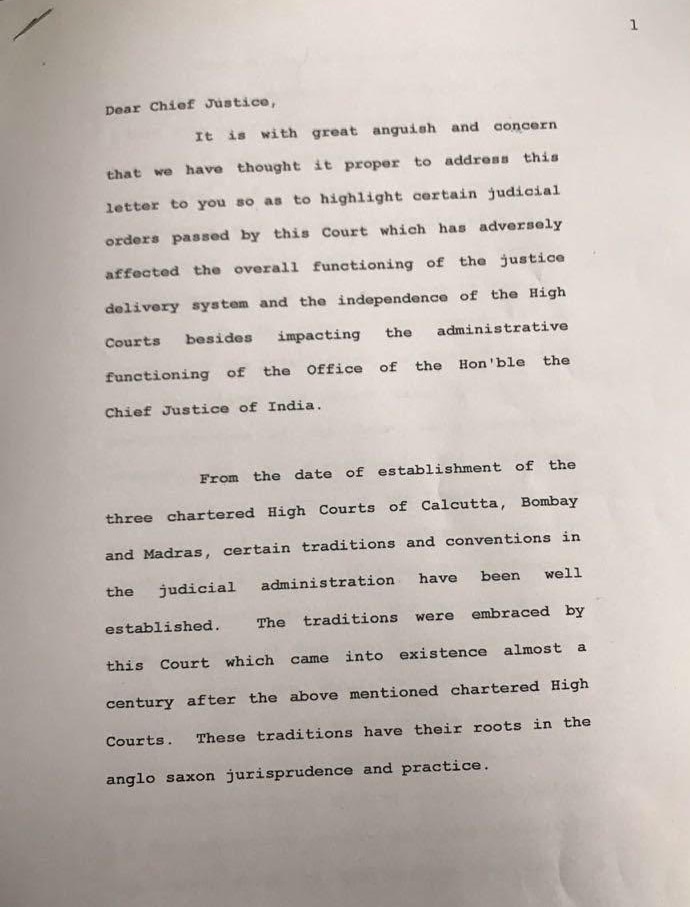 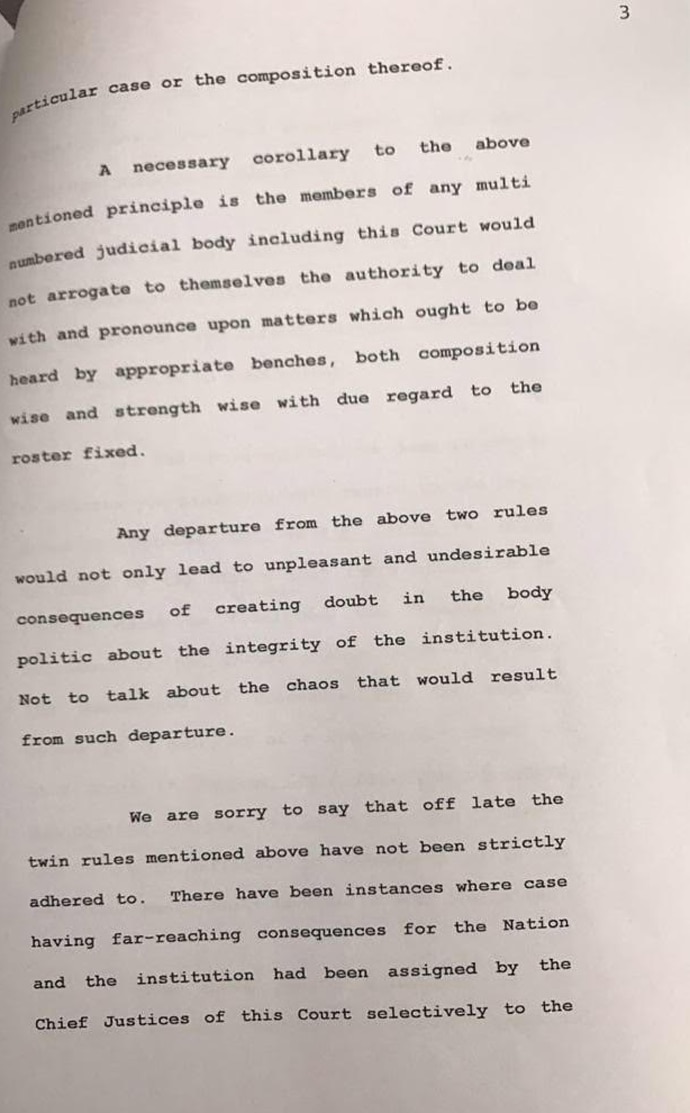 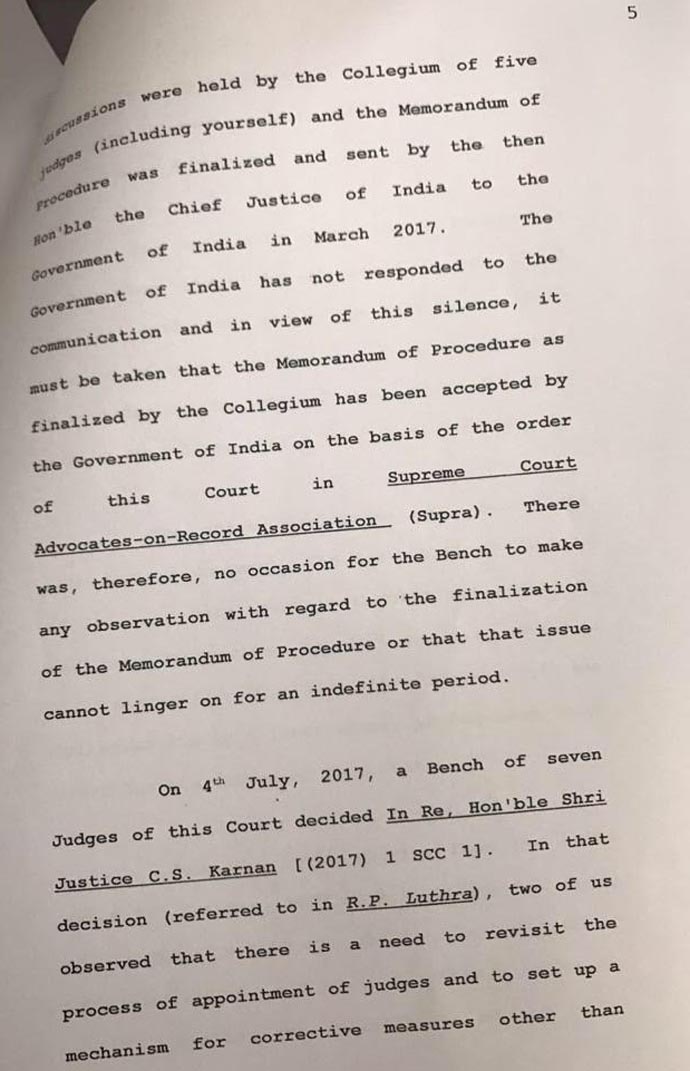 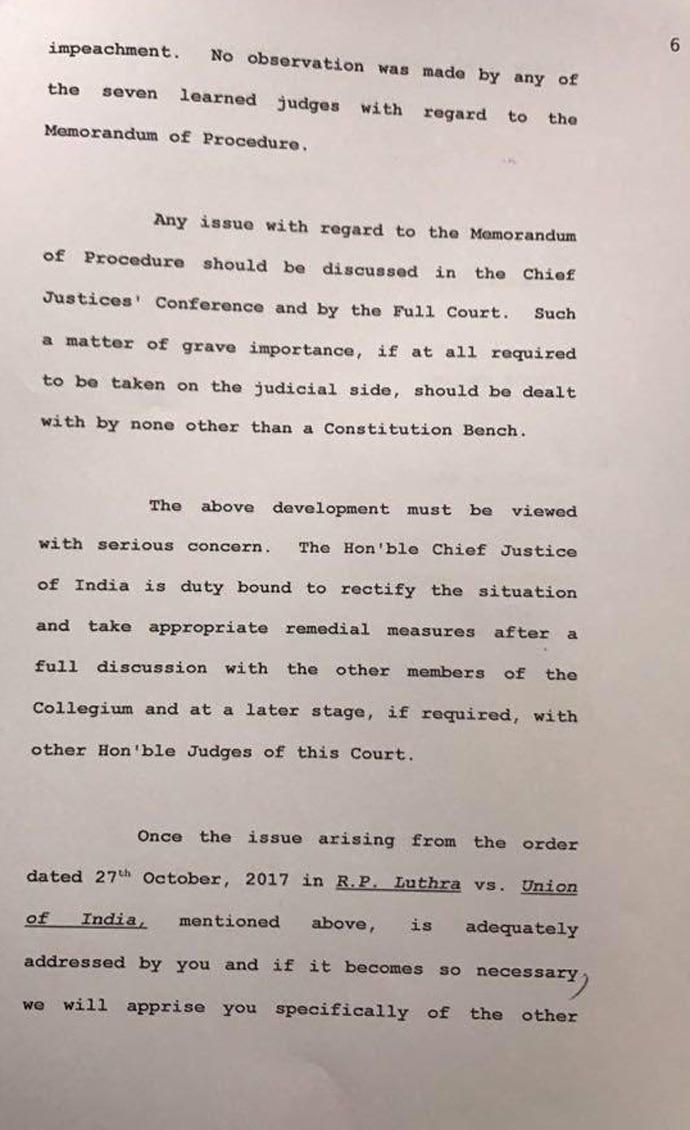 The letter, by justices Chelameswar, Gogoi, Lokur and Joseph, highlights how “certain judicial orders passed by the court [have] adversely affected the overall functioning of the justice delivery system and the independence of the high courts, besides impacting the administrative functioning of the hon’ble chief justice of India”.

On the matter of whether the CJI is the ultimate arbiter of which benches would decide which cases, the letter aired a strong opinion that directly differed from the CJI’s interpretation of himself being the “master of the roster”.

The letter said: "The convention of recognising the privilege of the CJI to form the roster and assign cases to different members/benches of the Court is a convention devised for a disciplined and efficient transaction of business of the Court but not a recognition of any superior authority, legal or factual, of the CJI over his colleagues. It’s too well settled in the jurisprudence of this country that the chief justice is only the first among equals – nothing more or nothing less."

‘Debt to the nation’

The four justices of the Supreme Court spoke of their “discharge of the debt to the nation” as the reason behind doing this, going on to say “nation should not say we sold our souls”. In an extraordinary rendition of judicial candour, the justices spoke of the problems weighing down the Indian judiciary, something that seemed like a déjà vu of the earlier face-off between the CJI and justice Chelameswar, once again on the Medical Council case hearing over the PIL filed by senior advocates Prashant Bhushan and Kamini Jaiswal.

Four of us have been telling the CJI Dipak Misra to correct his ways for the sake of the institution. We have spotted things in the last few months. Tried to intervene but to no avail. 20 yrs from now, nation should not say we sold our souls: J. Chelameswar

While there are murmurs that after this the CJI should resign, nothing concrete can be said as of now, other than perhaps more such open, unparalleled clashes within the judiciary.

Although some might say that making the problems within the judiciary public harms the stature of the courts and the institution’s integrity, the four justices point towards the higher calling, that of the very fundamental values that the judiciary, and thereby democracy itself, stands for.

Also read: Why Indian judiciary shouldn't have let the fight spill out onto the street