Why Mumbai Police is under fire over Sushant Singh Rajput's case

The Mumbai Police’s casual attitude towards the investigation into the alleged suicide of actor Sushant Singh Rajput has created a cloud of suspicion over its credibility.

The Mumbai Police’s casual attitude towards the investigation into the alleged suicide of actor Sushant Singh Rajput has created a cloud of suspicion over its credibility. Their verbal dual with the Patna Police over jurisdiction of the investigation, the core issue, has added fire to the fuel.

On August 2, a couple of hours after CM Uddhav Thackeray discussed progress into the investigation with Mumbai Police Commissioner Param Bir Singh, the Shiv Sena led Brihanmumbai Municipal Corporation (BMC) forcibly quarantined the Patna City Superintendent of Police Vinay Tiwari, who had arrived in the city for investigation, for two weeks. This was the peak of the tussle between the police forces of the two cities.

The Patna Police are in Mumbai to investigate a complaint filed by Rajput’s father Krishna Kishore Singh, accusing the late actor’s live-in partner and actor Rhea Chakraborty of abetment to suicide. To their surprise, the Mumbai Police refused to share reports on Rajput’s post mortem and analysis of spot of the crime citing that the Patna Police do not have any court order, and meted them secondary treatment. The Mumbai Police stand accused of manhandling the Patna Police officers. Param Bir Singh has maintained that the case papers will not be handed over to the Patna Police. 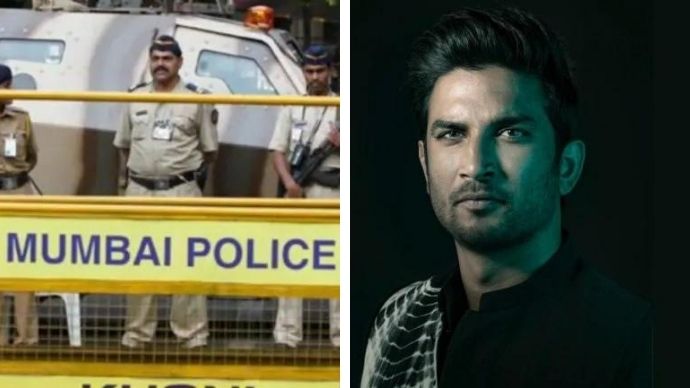 Mumbai Police’s casual attitude towards the investigation into the alleged suicide of Sushant Singh Rajput (R) has created a cloud of suspicion over its credibility (Photo: Reuters and India Today)

The Mumbai Police claimed that the CCTV footage in the entire lane where Rajput lived has been untraceable. This is unprecedented. The Mumbai Police have been under a lens since Rajput, a native of Patna was found dead in his rented apartment on June 14. They started an investigation into the claims by various celebrities that Rajput was a victim of nepotism in Bollywood. However, the complaint against Chakraborty has come as a twist.

The Mumbai Police’s non-cooperation, in this case, has put them in the dock. At least two BJP MLAs – Atul Bhatkhalkar and Ameet Satam – have alleged that the Mumbai Police are under pressure to protect an influential politician who was allegedly present at a party at Rajput’s house a day before his death. “Why is the police hesitant to collect the Call Data Records of all those present at the party?” asked Satam.

Initially, it seemed to be a crime story but the case has rapidly turned into a political battlefield. The real victim, however, is the image of the Mumbai Police, once equated with the Scotland Yard for its efficiency and expertise in handling investigations.