I first got to know of Sushma Ji around 26 years ago when I did not even know about politics. I married into the Badal family and my husband, Sukhbir Singh Badal, was contesting a parliamentary election from Faridkot. I was canvassing for him in that constituency.

I was born and brought up in Delhi and was not very fluent in Punjabi. So, I started looking at all the women in politics and Sushma Ji became my role model. Secretly, I tried to emulate her style of speech-delivery.

Of course, I could not match her prowess since my Punjabi was not that good. But I clearly remember that at the last rally before canvassing stopped ahead of the polls, after I had delivered my speech, a gentleman came up to me and said “Kamaal hai madam! Aap hamari Sushma Swaraj hain!” I was so happy being compared to her then. I never realised that I would be an MP 20 years later. Around four to five years ago, Sushma Ji congratulated me on one of my speeches in Parliament. I told her, “You’ll be surprised to know that you were my role model much before I entered politics.”

Sushma Ji was a role model when it came to oratory. She treated me like her daughter and I considered her an elder sister. In 2009, when I first entered Parliament as a Lok Sabha MP, Congress MPs from Punjab tried to heckle me. Since they were more in number, I would shout to make my voice heard. Sushma Ji told me: “Bibaji, you have all the qualities of becoming a good parliamentarian and you will go far. But you have to realise and decide whether this is a platform for you to convey your ideas or a place for you to fight.” I was grateful to her for that piece of advice.

She continued to guide me through the years. She was very considerate about the sensibilities of those around her. I accompanied Sushma Ji to the Vatican to attend the canonisation of Mother Teresa. There we got an opportunity to meet Pope Francis. Later, she told me she had included my name in the delegation because she knew that I would appreciate the gravity and significance of that moment because I am very religious. I got this unique opportunity to meet the highest religious figure among the Catholics, thanks to Sushma Ji.

Talking about tradition, I usually host a Punjabi lunch at my residence every year on the first day of the Budget Session after the Presidential address. During many of these lunches, we’ve had some wonderful conversations.

Recently, I had talked to her on my birthday. Sushma Ji was a very senior politician, but she called me three times on my birthday to talk to me. This humility, eye for detail and love for people endeared her to everyone.

Notwithstanding the wishes that have poured in for her from across the world, I had a front-seat view of how Sushma Ji was received abroad when I accompanied her to Italy and France. One saw the affection and regard that her counterparts had for her. She was short in height but her stature was a cut above everyone. She left a lasting impression on everyone. In India and abroad, Sushma Swaraj floored everyone with her knowledge and wit. (Photo: India Today Archives)

She was a very integral part of the Cabinet given her comprehensive experience encompassing different portfolios. She was an expert at law and, more importantly, parliamentary procedure. She knew how to table the bills and was an expert at parliamentary planning because she had been the Leader of Opposition. More importantly, Sushmaji was always in charge of vetting speeches. The goodness and beauty of her writing were reflected in her speech. She knew the words that could touch the common man and express their problems in the most evocative manner.

Sushmaji’s sartorial choices were guided by days of the week. Monday was white, Tuesday was red, Wednesdays were green, Thursdays were yellow and Friday was blue. And this is something that most women in Parliament picked up unconsciously. Even I started emulating that to some degree.

Even some Sikh MPs in Parliament started matching the colour of their turban with the day of the week. This goes to show that Sushmaji lived a very systematic life that was informed with clarity. 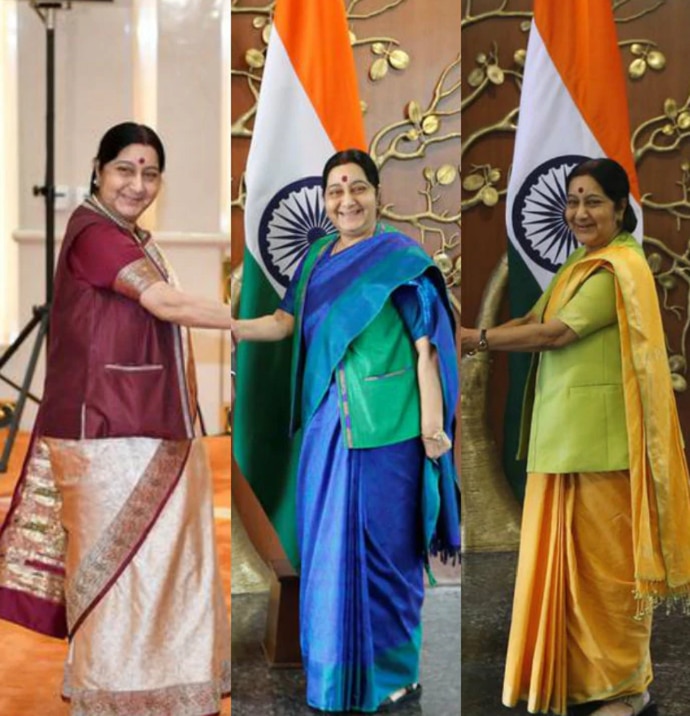 Sushma Swaraj inspired many Parliamentarians with her designated colours of the week dressing style. (Photo: Reuters)

Sushmaji had an eye for detail and went in-depth with everything. She was very good at analysing situations and people. She could gauge the reaction she would get to a point she had enunciated. She explained things at least three times to ensure that the listener was on the same page as her. She said things in a positive way instead of an acrimonious way. This is probably why she had communication channels open across party lines.

I was lucky to share 11 long years with her in the Parliament and five years as a Cabinet colleague. I have so many fond memories of Sushmaji that they can be compiled into a book.