Quoting from the Quran, External Affairs Minister Sushma Swaraj, a speaker par excellence, conveyed to the group of Islamic countries she was addressing that India, the land of Mahatma Gandhi, was committed to peace — but not at the cost of its security.

Swaraj’s remarks came while addressing the inaugural session of the foreign ministers' meet of the Organisation of Islamic Cooperation (OIC). This was the first time that India was invited to the OIC meet.

For the uninitiated, the OIC is a gathering of 47 Muslim-majority countries and is the second-largest inter-governmental organisation after the United Nations (UN). The collective population of OIC member states is over 1.9 billion people.

Speaking to the OIC, without naming Pakistan, Sushma Swaraj called out for the isolation of countries that fund and support terror. The foreign minister said while Islam in essence means peace, it was the distortion of Islam that has come to threaten peace across the world.

Swaraj said, “The fight against terrorism is not a confrontation against any religion. It cannot be. Just as Islam literally means peace, none of the 99 names of Allah mean violence. Similarly, every religion in the world stands for peace, compassion and brotherhood.” Sushma Swaraj made a forthright speech at the OIC — and called for the isolation of countries that support terror. (Source: Reuters)

Swaraj has carried to the world New Delhi’s message of calm — with a firm warning that a violation of India’s borders will not be tolerated.

It is pertinent to note here that Pakistan boycotted the meet as a mark of protest against India’s participation in the event.

In her address that lasted about 15 minutes, Swaraj not only succeeded at scoring a diplomatic win against Pakistan, but also reminded the world that India was indeed a peace-loving country which was a victim of terrorism emanating from across its borders.

Swaraj is one of Narendra Modi’s most able ministers — and a leader respected across party lines. Swaraj is only the second woman to serve as the country’s foreign minister, the first one being Indira Gandhi.

Swaraj has earlier served as India’s Information and Broadcasting and Telecommunications minister.

In the wake of the Indian Air Force (IAF) air strikes on terror camps in Pakistan, it was Swaraj who chaired an all-party meet to ensure the nation's political circles were taken into confidence over the government’s initiatives. The Modi government chose Swaraj to address this meeting because of her wide acceptability.

It is not just the OIC meet where Swaraj has made India proud in her capacity as foreign minister.

The external affairs minister has set an example on how to use Twitter — one that will be difficult for many people to replicate. Indians in distress across the world used Twitter to reach out to Swaraj — and were taken by surprise at the prompt action that she takes with regard to most issues.

The same year, Sabah Shawesh, a Yemeni woman married to an Indian who was stuck in a conflict in her country, was reunited with her husband and eight-month-old baby after she took to Twitter to share her plea with Swaraj. And Swaraj did not disappoint: she said it was her duty to help Shawesh. It indeed was. But the promptness with which she has been doing her duty is worthy of praise.

Swaraj has had the privilege of working with senior BJP leaders Atal Bihari Vajpayee and LK Advani. Despite her being a leader from the Advani camp, Swaraj was given an important ministry when the Modi government came to power. Remember, a lot of other such leaders, including Yashwant Sinha and Jaswant Singh, were reportedly sidelined.

But Swaraj’s talent was impossible to ignore. 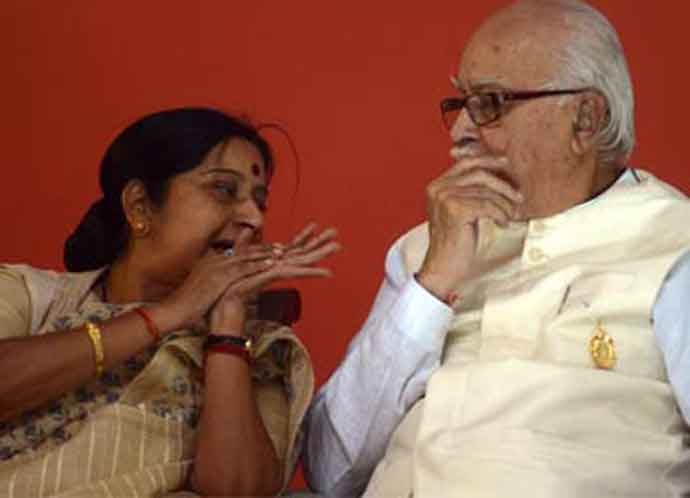 Sushma Swaraj belonged to the LK Advani camp. Yet, she was given a very important portfolio under the Modi government. (Source: Twitter)

She is a powerful speaker and comes with a fairly clean political past. Swaraj, a sitting member of Parliament from Vidisha, has said she wouldn’t be contesting the 2019 General Elections — she has been dealing with health issues all this while — but that she may remain active in politics.

If the BJP comes back to power, it must give Swaraj a larger role in the new government — because people who deliver, and do so consistently, must be rewarded.

Also read: How to handle trolls? Learn from Sushma Swaraj