Sushma Swaraj did not keep the promise made to me

Sushma Swaraj was not a run of the mill leader but one endowed with multiple gifts of nature. Naturally charming, warm-hearted, humane and attentive to the person in conversation to the point of respect.

I was blessed to have been her earliest bureaucratic contact when she was appointed as the Haryana Minister of Culture, becoming the youngest ever minister in India in 1977 at the age of 25. I was already posted as Director Culture. Sushma Swaraj was the youngest Cabinet minister at the age of 25. (Photo: Twitter)

For a few days, of course, she looked inexperienced and naive but being naturally sharp and extremely quick on the uptake, she became a veteran in no time. Although I was nearly six years older, she affectingly started calling me by my first name, Yaqoob. I was newly married and my wife was a budding journalist. Sushma ji gave an interview to her for the last page of Sunday magazine that was a first for both! Of course, she called my wife also by first name.

In due course, we moved to different departments. But the bond stayed strong. Two decades later, when she was minister of Information and Broadcasting and I was Principal Secretary to CM Haryana, OP Chautala, she called me, offering me the post of DG Doordarshan. I said it would seem ungrateful of me to ask Mr Chautala to relieve me from what was considered the most powerful job in the state.

I, therefore, suggested that she should herself mention it to the CM. If he agreed, well and good, if he didn’t, at least he would not be annoyed with me. OP Chautala got miffed with Sushma Swaraj when she said she wanted me to join her team. (Photo: India Today)

At first she refused point-blank explaining how Chautala was not on good terms with her as she had opposed his party’s alliance with the BJP. On my persuasion, she finally agreed and spoke on phone to Mr Chautala that there are two posts of DGs in her Ministry — All India Radio and Doordarshan — and she wanted to post Haryana officers. I was sitting with the CM. Initially, he said, “Yes behenji, whichever officer you want, I’ll send.”

But the moment she mentioned my name, I heard a barrage of unspeakable invectives! “You want to ruin me?” was the polite refrain.

She called me a few days later to inform that just a few days were left for nominations and if I could manage myself. I later on managed with the help of my colleagues in the CM secretariat who were jealous of me and were more than excited at the thought of my going!

Swaraj faced a lot of criticism from her party leaders for selecting a Muslim for the most sensitive job — especially from those who knew my journalist wife was critical of her party.

But the fact that she defended me like a rock was most touching. She used to share with me all such conversations.

The arrangement between us was to meet once a week for two hours where I would speak for 1.5 hours and she for 10 minutes. That’s when I realised what a brilliant listener she was who heard every word with rapt attention and, of course, remembered it too. Occasionally, it boomeranged on me when a few months later, in a new briefing I mentioned facts or figures which were different. She would immediately catch me, “Yaqoob, six months ago, you had given me a different figure!”

Needless to say, you had to be on your toes.

Her being a great listener was perhaps also the secret of her great oratory and vast knowledge.

Later on, she was abruptly moved from the I&B Ministry to the Ministry of Health. On the very second day, she had to face Starred Questions. The way she fielded them with authority astonished everybody — including her critics. 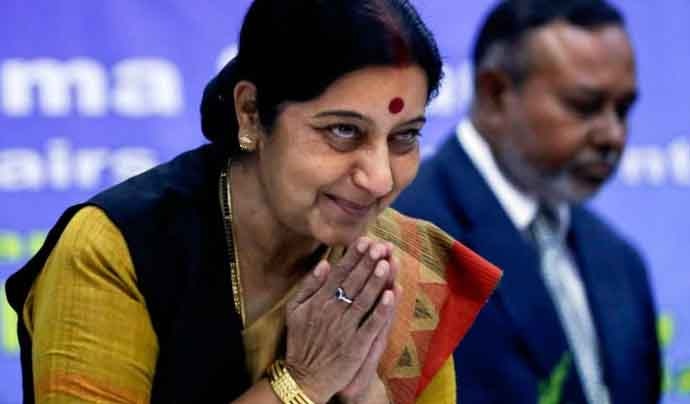 Sushma Swaraj's performance in the Ministry of Health surprised everybody. (Photo: Reuters)

Since I was considered her protege, I was also shunted out of Doordarshan soon enough. Many people tried to give a communal colour to my transfer but I was always clear that it was because of my proximity to her. Among my legacies of the post is the setting of DD Archives, which she encouraged.

DD Bharti was also set up by me within a month of my joining on her suggestion. She also supported my initiative to set up DD India as the international channel. She also supported me when I converted DD Sports from a ‘pay to watch’ channel to free to air, notwithstanding a loss of about Rs 20 crore. After she left, I had a difficult time till my eventual exit.

One incident is etched in my memory. When my daughter was getting married, Sushma ji was scheduled to go on an official tour to Houston in US. When her personal secretary Anshu Prakash reminded her of the marriage, she immediately canceled her visit. By then, my wife, who had become totally hostile to her, made it a condition that I won’t invite any politician.

I was in a difficult situation where Sushma ji was waiting for the invitation to bless my daughter. I eventually went to her with an invitation card and requested her not to come! For a moment, she was stunned. But recovering within seconds, she made me feel like a hero for keeping the marriage simple. To make me comfortable, she mentioned a marriage in her family which was attended by only seven guests.

During my six years in the Election Commission, she called just a couple of times to seek some clarifications but never to ask for any favour for the party though all her party men were fully aware of our proximity.

I met her last at her home on June 13 after the formation of the new government. While there was a lot of speculation that she had been dropped, she looked so happy and relaxed. I saw a rare glow on her face. I enquired about her health and why she had opted out of electoral politics. She said after her kidney transplant, doctors had advised her to strictly avoid two things — dust and physical human contact. She mentioned that in her constituency, Vidisha, it was impossible to avoid dust. Similarly, as a Lok Sabha MP, it was impossible to keep away from the people of the constituency. I came back with the feeling that she was now in the pink of health.

During the four decades I had known her, I always reminded her of her promise, in a lighter vein, that if she ever became the Prime Minister, I would be her principal secretary. Not once did she wince.

Ma’am, you didn’t keep your promise. You will be in my heart forever.

Please rest in peace wherever you are!

Also read: How Sushma Swaraj quoted the Quran and Mahatma Gandhi to convey India’s message to the OIC