A woman who smashed political patriarchy: Sushma Swaraj blazed through politics with humour, empathy and loyalty

"In our midst, there are nations that still speak the language of terrorism, that nurture it, peddle it, and export it. Those who seed extremist ideologies, reap a bitter harvest. This germ of evil has grown into a hydra-headed monster. Terrorism is the biggest violation of human rights, a crime against humanity itself. But we must ask — who benefits? If any country does not want to fight against terrorism, we should isolate them,” Sushma Swaraj had once said — referring to Pakistan — in a speech befitting her aura and stature at the UNGA in September 2016.

Memories of that unforgettable speech from almost three years ago came flooding back as the tragic and untimely news of Sushma Swaraj's death filtered in.

‘Gone too soon’ is the first thought that crossed my mind, amidst shock and anguish at the sudden demise of the feisty former Union Minister.

A sense of mind-numbing bewilderment and hopelessness gripped the nation as many collectively reminisced how she was ‘always there’ on Twitter. Just a few hours ago, at 7.23 PM on August 6, 2019, she had tweeted and profusely thanked Prime Minister Narendra Modi for the abrogation of Article 370, before calling it a day forever on the same evening. That life is transient is the hard truth but that it can be snuffed out so unexpectedly is a grim reminder of how fickle and impermanent it is.

From being a Supreme Court advocate in the early 1970s to becoming the youngest ever Cabinet Minister holding the education portfolio in the government of Haryana at 25 years of age, Swaraj's career is the stuff that inspirational life-journeys are made of.

In 1979, she became the State President of the Janata Party, Haryana — when she was merely 27 years old.

She was the first female spokesperson of a national political party in India.

She has many other firsts to her credit as the BJP's first female Chief Minister of Delhi in 1998, Union Cabinet Minister, General Secretary, Leader of Opposition from 2009-2014 and, of course, as our first full-time Minister of External Affairs from 2014-2019.

She is the Indian Parliament's first and only female MP honoured with the Outstanding Parliamentarian Award.

She contested 11 direct elections from four states, having been a seven-time MP and three-time MLA.

She also served as the President of the Hindi Sahitya Sammelan in Haryana for four years. This year on February 19, Swaraj accepted the prestigious Grand Cross of Order of Civil Merit, which was conferred by the Spanish government in recognition of India's support in evacuating its citizens from Nepal during the earthquake of 2015. Young, yes: But undaunted. Sushma Swaraj's swearing-in as the youngest ever Cabinet Minister in the country in 1977. (Photo: India Today Archives)

That she was a polyglot who spoke fluent Kannada and endeared herself to the electorate of Bellary, despite losing the election there in 1999, is a lesser-known fact about her.

No one can also forget her command over Sanskrit — in which she took her oath in 2014, after winning the Lok Sabha election from Vidisha by a record margin of over 4 lakh votes.

Reams of paper and endless words can not do justice to the sheer vastness and generosity of her personality.

But, to me, as a woman politician myself, Sushma Swaraj was a meritocrat who truly broke the political glass ceiling, in more ways than one, inspiring umpteen generations to follow suit.

Swaraj's seamless transition from a consummate lawyer to an equally astute politician, who was both combative and collaborative, has a lesson for every woman politician who wants to make it big by cutting no corners and making no compromises in a field that is still male-dominated. A lesson that combines ingredients of meritocracy, sensitivity, firebrand oratory, razor-sharp memory and sound intellect to become a fine politician who shall never fail — but more importantly, is connected to the people of the country, winning hearts and leaving a lasting legacy.

Sushma Swaraj scored handsomely over her peers and rivals on this count.

She was truly all heart — without ever losing her head. Her speech on the floor of Parliament during the infamous no-confidence motion on June 11, 1996 is a rare piece of oratory that was both eloquent and powerful.

When someone from the Indian National Congress accused her and the BJP of being communal, she tore into the Congress rank and file with these words that will echo in the annals of time for good – "Hame Hindu hone mein koi sharmindagi nahin hai. Yadi Hindu hona aur garv mehsoos karna communal hai, toh haan, hum communal hain. Hame vote bank aur appeasement ki rajneeti karke tathakatit budhhijeeviyon se secularism ka certificate nahin chahiye." (We are not ashamed of being Hindus. If feeling pride to be a Hindu is communal then we are communal. We do not need vote bank politics or governance based on appeasement to receive a certificate of secularism from so-called intellectuals).

"When one Manthara and one Shakuni can keep the likes of Lord Rama and Yudishthir out of their right to rule, then if you take a look around this House, you’ll find many Manthras and many Shakunis opposing us. How can we stay in power? I suppose it (no-confidence motion) is the nature of Ramrajya and Surajya,” she fearlessly called out the opposition’s bluff that had moved the motion against the fledgeling then-Vajpayee government.

Years later, the catchphrase for her tenure under the Narendra Modi government was her focus on ‘fast-track diplomacy’.

This had three faces — proactive, strong and sensitive.

Since taking office, the External Affairs Minister held a round-table meeting with all Indian heads of missions to the SAARC region, ASEAN region and the Middle East separately, as a follow-up measure to carry forward the leads gained by high-profile visits and exchanges. While she was a diabetic and had other health-related issues, these never came in the way of her gruelling schedules which constantly required her to travel overseas as part of her work commitments. It was during her recent visit to Hanoi, Vietnam, that Sushma Swaraj stressed on the need for an Act East Policy that she said should replace India's over two-decade-old Look East Policy emphasising a more proactive role for India in this region.

Rarely does one find a leader who, cutting across political ideologies, can endear herself to the masses, diplomatic missions and the more difficult to please millennials. But Sushma Swaraj was an exception. She was endowed with a natural gift of the gab and her witty repartee on Twitter left people tongue-tied. The micro-blogging site became her window to the world and while many sneeringly called her an ‘agony aunt’, no one doubted her bonafide intent in reaching out to both Indians and nationals from other countries, the world over, come hail or storm.

“Even if you are stuck on Mars Indian Embassy there will help you,” she famously tweeted once. “Brother, I cannot help you in matters of a refrigerator. I am very busy with human beings in distress,” she tweeted at another time, showcasing her humorous side that had not been blunted by the hurly-burly of politics.

“India is my country. Indians are my people. The caste, state, language or religion is not relevant for me,” she tweeted not long ago on being told she only helped Muslims with visa woes and was indifferent to others.

Despite being very well-educated and fluent in English, she did not suffer from any elitist or colonial hangover, unlike many politicians of her time for whom the ‘unwashed, mango people’ have been objects of derision and contempt.

She famously tweeted once, “There is no problem. After becoming Foreign Minister, I have learnt to follow English of all accents and grammar.” Another time, someone asked her husband, Swaraj Kaushal, why he did not follow his famous better half on Twitter. To this, Kaushal retorted, “Because I am not stranded in Libya or Yemen.” 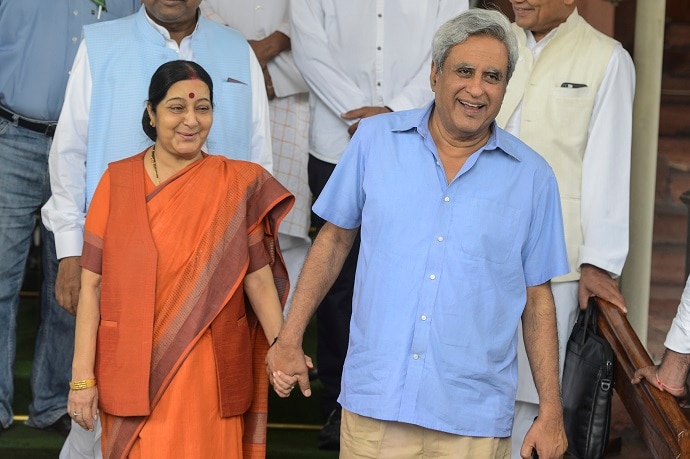 A wonderful bond: Her husband Swaraj Kaushal had a witty comeback about not following Sushma online. (Photo: India Today Archives)

Aside from the Twitterverse, Sushma Swaraj's enduring legacy would have to be her charismatic camaraderie that made tricky diplomacy look effortless — case in point, Operation Raahat. This was an operation of the Indian Armed Forces to evacuate Indian citizens and foreign nationals from Yemen during the 2015 military intervention by Saudi Arabia and its allies in that country, at the peak of the Yemeni Crisis. The evacuation by sea started on April 1, 2015, from Aden Port, with 4640 Indians and 960 foreign nationals eventually being evacuated and transported safely to their respective countries, showcasing the sheer grit, political savvy, diplomatic prowess and flawless administrative skills of Sushma Swaraj.

To me, she will always stand tall, head and shoulders above others, for ensuring that politics in India became gender-agnostic.

To Sushma Swaraj goes the credit for demolishing political patriarchy in a manner that only she could. Swaraj chose the BJP and was loyal to the BJP's ideology till her last breath, in an age when loyalties are a rarity.

Sushma Swaraj, by all means, was the stronger one.

Also read: All About India: What Sushma Swaraj’s last tweet and phone call with Harish Salve tell us about her