The sari has become the undisputed uniform for women in politics, with Smriti Irani, Mamata Banerjee — and Sushma Swaraj — popularising it. Its introduction could very well be attributed to Indira Gandhi.

Since then though, the sari has become both a stereotype and a symbol of power, and depending on the narrative you’re siding with, you will see a woman in Indian politics as either ‘breaking the norm’, like Priyanka Gandhi, when she chooses not to clone her grandmother, or moulding herself to ‘fit into the norm’, like Nusrat Jahan, whose sari-chooda-sindoor avatar in Parliament had the Internet sharply divided.

For the truth is, politics is a game of image — and what you wear does define you.

Sushma Swaraj, however, even while staying away from this sort of sartorial politics, created a benchmark. A simple sari with a border, a large bindi on her forehead and a thick line of vermilion in the parting of her hair — it wasn’t difficult to identify Sushma Swaraj, the astute politician, as she walked in Parliament.

But then, that's what many women walking into Parliament look like.

How did she stand out? Well, with her Modi jacket-sari combo.

As a person, interestingly, Sushma Swaraj was quiet but she commanded a presence that made everyone sit up and listen when she spoke.

And her best-of-both-worlds persona reflected in what she wore too.

A sari is a beautiful garment — but ask any working woman what she dislikes about it, and they'll tell you how it's not everyday-life friendly.

By combining a short jacket on top though, Sushma Swaraj not only gave it an elite executive look, but she also turned it into formal office wear. 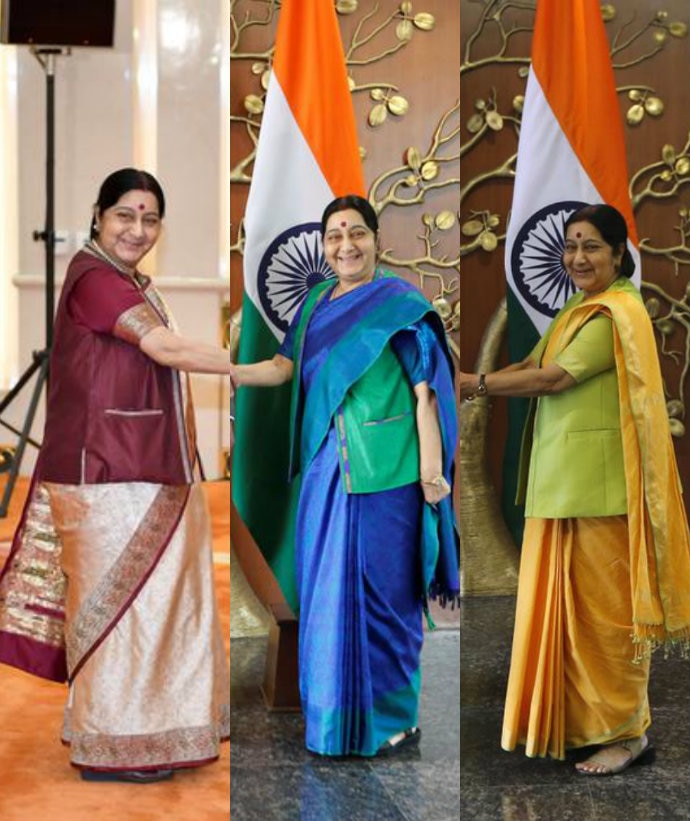 Contrasting Thoughts: A jacket in a contrasting colour, matching the border of the sari, made Sushma Swaraj stand out. (Photo: Reuters)

Political meets in the country or abroad, rallies or press conferences, Sushma Swaraj was often seen pairing her plain, neatly pleated and pinned to the shoulder sari with a Modi jacket in a standout shade. It looked fashionable and yet, it was convenient.

You don't know the benefits of pockets until you've experienced it.

We associate Modi jackets with male politicians — a staple for everyone from Narendra Modi to Amit Shah, Rahul Gandhi to Shashi Tharoor's wardrobe. Even if you are of the Nehru jacket school of thought, it was still something that was essentially popularised by a man — just a man of a different political ideology.

Sushma Swaraj was the only one who managed to break the gender appropriation of the jacket and see it exactly how it is — a garment that can be used for one's convenience. 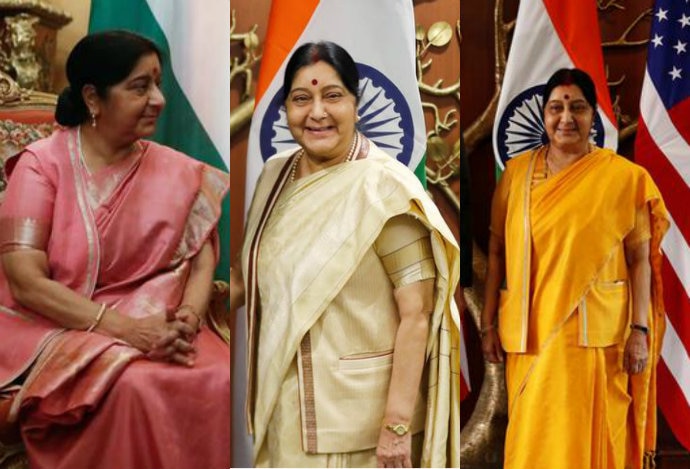 But these were no run-of-the-mill jackets that Sushma Swaraj donned. She had a pattern — a slightly warmer one in the cold, raw silk variants for everyday use. These were carefully paired to compliment the sari she'd wear them with — either by contrasting it with the base colour of the sari but still matching the border, a duotone ensemble, if you may, or sticking to a more sophisticated monotone pairing with pink on pink or yellow on yellow.

Aside from looking absolutely striking just by making this seemingly mismatched fusion wear work, the sari and jacket combo gave her a structured appearance — akin to what you'd see in female politicians in Western countries achieve. But, at the same time, it was 100% Indian, steeped in our culture, celebrating the country's centuries of handloom history.

She was, after all, a proud Indian — and she made India so proud, in more ways than one.

Also read: Nehru vs Modi: Whose jacket is it anyway?