Why every city should adopt the Indore model of waste management

Indore’s continuous success in the sector deserves accolades for consistent efforts and diligent planning for the entire waste value chain. The Indore model provides several examples that other cities can and should adopt.

India is witnessing rapid urbanisation and it must leverage the benefits of agglomeration economies with robust urban planning. However, such mega-urban expansion is always linked with challenges like limited resources and increased pollution. One critical and related challenge is the effective management of municipal solid waste in urban areas and implementation of circular economy at the local level.

Urban India generates about 1.4 lakh tonnes of waste every day and treats about 65 per cent of this. Prior to Swachh Bharat Mission, waste treatment capacity was only about 14 per cent, and in the past six years, India has progressed in this area like never before. This has been possible due to government’s — and particularly the Prime Minister’s — clarion call to make cleanliness a mass movement. Recent data also suggests that waste generation in the country is on a declining trend. India is positively following the 3R (Reduce, Reuse, Recycle) concept, which places Reduce at the top of the waste management pyramid. 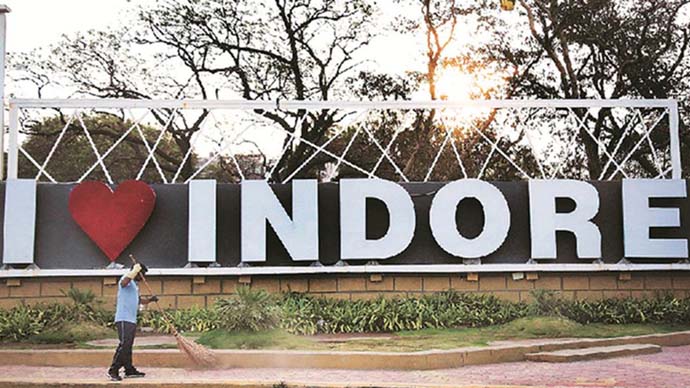 Indore was declared the cleanest city in India for the fourth time in a row under the Swachh Survekshan 2020. (Photo: Twitter/ @HardeepSPuri)

Many cities like Indore, Surat, Navi Mumbai, Ambikapur, Mysuru have been successfully implementing circular economy concepts and have showcased excellent models for effective waste management. In fact, Indore was declared the cleanest city in India for the fourth time in a row under the Swachh Survekshan 2020. Indore’s continuous success in the sector deserves accolades for consistent efforts and diligent planning for the entire waste value chain. The Indore model provides several examples that other cities can and should adopt.

Indore’s Municipal Corporation has championed the art of social engineering and behaviour change by leveraging technological advancements, and involving NGOs and private companies diligently. Daily morning inspection visits by the officials and the municipal commissioner, meticulous planning for every initiative and extensive stakeholder consultation have also been key to the process.

The foundation of the planning process was a detailed gap analysis to ascertain the infrastructure and human resource requirement. A comprehensive route plan was developed to achieve 100 per cent door-to-door waste collection. Due to this, the Corporation was able to provide timely service to all households with a standard deviation of only about five to ten minutes. The requirement of vehicles for each ward was determined on the basis of the number of households, and information about the vehicles and the time for the waste collection was widely disseminated for everyone to be aware and diligent about when, where and how to dispose off their waste. This eliminated the need for secondary or community-level collection bins and helped Indore become a “Bin-Free City”.

For maximum efficiency, multiple garbage transfer stations were constructed at various locations where garbage vehicles could offload waste and return to their predefined route in minimum time. Geotagged vehicles and route plan are tracked from the central control and command centre. In case of any deviation, the command centre, ward member and responsible ULB official receive instant notification to look into the matter. Now, even the general public can track the vehicle of their area through a mobile application.

Another significant intervention was the procurement of vehicles with augmented waste-carrying capacity. Instead of relying on the conventional numbers, Indore analysed how much waste can be transported by these vehicles as per the RTO rules. Due to their design, many vehicles were found to be carrying one-third quantity of what they could actually carry. So, the design of the vehicles was modified to accommodate more waste per vehicle while keeping the weight limits of RTO intact. This single change resulted in substantial financial benefits. While previously one vehicle could collect waste from 300-400 households, now it could cater to 1,000-1,200 households. Lesser number of vehicles led to lesser fuel requirement, lesser drivers and helpers. Such small tweaks could help cities to make progress even with the same resources.

Achieving 100 per cent waste segregation at the household level through social engineering is another fascinating aspect of the model. NGOs and civil society organisations were also roped in for the task. Personnel from these organisations were involved in handholding the households for segregating waste on the spot and sensitising them towards the benefits of it. This also sent a clear message that the vehicle will not carry mixed waste in any circumstances. In no time, people internalised the importance of keeping their city clean. The concerned officials were instructed to resolve the complaints of households related to the Corporation on priority. This effort made these workers a link of great trust between the citizens and the Corporation. And not only households but bulk waste generators, commercial buildings, hotels, vegetable markets, electronic waste handlers, were appropriately involved in the plan.

After achieving the optimum level of service delivery, spot fines and penal structure for indiscriminate dumping of waste were also revamped and implemented strictly. While previous penalties were around Rs 50 to Rs 200 for different violations, it was gradually increased to Rs 1 lakh as spot fine. The benefits of these efforts are countless. Indore can now treat its entire daily waste of about 1,200 metric tonnes on the same day, which means no more heaps of garbage in the city. The biggest reason for poisonous landfills and the hideous heaps of waste in Indian cities is their waste processing capacity and unsegregated collection of waste.

Besides the environmental benefits, there were financial benefits as well. The Corporation earned about Rs 6 crore in FY-19 solely from waste management. User charges collection rose by 60 times from Rs 60 lakh in FY-14 to Rs 36 crore in FY-20. Now many households are even being paid Rs 2.5 per kg of dry waste. The city also enjoys several positive externalities. Using Bio-CNG made from wet waste processing, converting plastic waste into diesel, preparing compost from organic waste, manufacturing building materials from construction waste and many more recycling activities are undertaken. The Bio-CNG and diesel are used in city buses as fuel benefitting the transport authorities and the city by reducing the carbon emissions.

An efficient waste-management system imparts greater resilience to the region against pollution. Even in times of disasters like the Covid-19 pandemic, while many other cities were firefighting to deal with hazardous waste and Central Pollution Control Board came into action with fresh guidelines, people in Indore were already segregating hazardous waste.

With a continued focus on making India clean, every city corporation can tread the path Indore has paved. The onus also lies with the citizens and waste segregation remains everyone’s most crucial responsibility.

Also Read: Why Swachh Bharat is a priority for Modi

#Clean India, #Indore, #Swachh survekshan 2020, #Swachhbharat
The views and opinions expressed in this article are those of the authors and do not necessarily reflect the official policy or position of DailyO.in or the India Today Group. The writers are solely responsible for any claims arising out of the contents of this article.

The writer is Young Professional with Managing Urbanisation Vertical of NITI Aayog.