The Swachchta Kranti mission aimed to wrap the message of hygiene and sanitation within spiritual well being.

If you thought consumer engagement, behavioural change, et al were terms used by marketing gurus, the Simhastha Kumbh Mela that concluded last week at Ujjain in Madhya Pradesh just added a new dimension to it.

The devout went back from what MP government propagated as Green Kumbh with not just cleaner souls, but also a message to maintain sanitation and a pledge to eradicate open defecation. Hoardings such as this - openly appealed to people to inculcate habit of using toilets with photos of prominent saints and sanyasis.

The once-in-12-year congregation at Ujjain was an attempt by the ascetics to spread the message of #WASH - water, sanitation and hygiene.

As one walked the dusty roads amid the swarming masses, hoardings and posters with photos of prominent sadhus and sanyasis with the message of ending open defecation could be found in ample numbers along the roads at the temporary Simhastha Mela Nagari (the area demarcated for Simhastha activities).

Is paavan dharti par, hum khule mein na shauchk are, garv kare aisi dharti par, aur shauchalay ka prayog kare (Let us not defecate in the open on this holy land, use the toilet and be proud of this land) read a banner with Swachchta Kranti as the top headline. 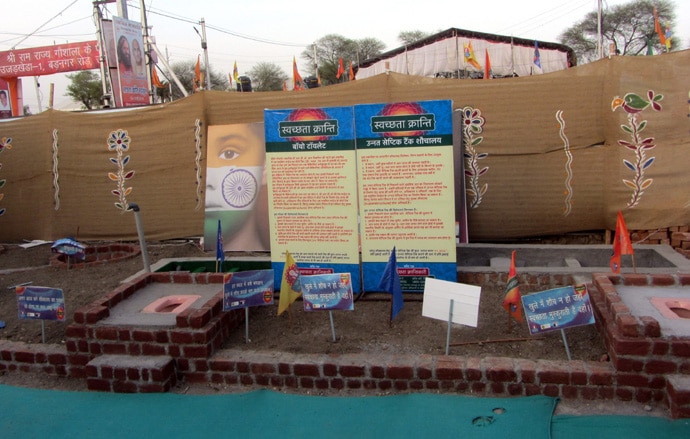 Prototypes of two types of toilets introducing the concept of sanitation through Swachchta Kranti.

Imagine, contrary to the orthodox thinking of keeping devalaya (place of worship) and shauchalaya (toilet) as far away as possible, here was a distinct attempt at clubbing the two: inner and outer cleanliness.

But, for a country where religion rules the roost and where more than 50 per cent households do not have any latrine facility (53.1 per cent as per the Census 2011 data, down from 63.6 per cent in 2001), this is an imperative transition.

Lack of water, forget adequate supply, already causes a volley of diseases and the condition is further aggravated due to lack of toilets, leading to prevalent open defecation practices. This pulls down the social indices for the country and affects over all GDP.

Meditation and sanitation should go together

Simhastha Kumbh sought to challenge this pitiable situation. One of the prominent proponents was Swami Avadeshananda of the Juna Akhada. His camp site, which was possibly the biggest draw at the Mela Nagari, hosted a kiosk that spread awareness about sanitation and goaded the people to end open defecation.

At another point, inside the camp site of Swami Chidananda Saraswati of Parmarth Niketan, Rishikesh, was a corner dedicated to Swachchta Kranti (sanitation revolution). On display were prototypes of bio-toilets and Unnat septic tank toilets. A board points to a public toilet facility on one of the roads of Ujjain Mela Nagari.

He is one saffron clad man who did not shy away from saying: "Meditation and sanitation should go together."The information kiosk, the exhibition and the puppet theatre, were all part of the mass awareness campaign along with showcasing provisions of facilities.

It used the characters of saffron-clad sadhus, Lord Shiva and even Maa Ganga and Maa Kshipra - Ujjain's very own river - to name a few.

"What we are trying to do is guilt-trip the people - you come here, call Maa Kshipra or, at Rishikesh, call Maa Ganga and then pollute these rivers?"

"One of the biggest misconceptions we encountered was that only the weak and the women needed the toilet. Hum mardhai, hame kya zaroorat hai (we are men, why do we need it)? Our play tackles all such situations," said Maitreyee Narendra, who was coordinating the awareness campaign for all the ashrams.

After the puppet play concludes, information is handed out about how the government helps in building a toilet, chips in with part expenditure et al.

But apart from such campaign activity, it is the prominent sanyasis, saints such as Swami Avadeshananda, Swami Chidananda Saraswati, who also happens to be the co-founder of the Global Interfaith WASH Alliance (GIWA), and Baba Ramdev who spoke openly during their kirtan and pravachan (religious discourses) about increasing hygiene in neighbourhood, not polluting rives and ending open defecation.

While the ascetics were trying to reach out with a message to be taken home, it was no easy task for the Ujjain Simhastha authorities to manage the basic amenities for the teeming millions.

As against Ujjain town's population of approximately five lakh, an estimated 30 million people visited the Simhastha Kumbh during the month-long religious event at the temporary Mela Nagari, spread over 3500 ha.

A 20,000-strong sanitation staff worked 24X7 to ensure garbage collection and in general maintaining the cleanliness of the place. Of course, behavioural change does not happen overnight, so there were complaints of misuse, lack of water and soiled toilets.

As per a report in Hindustan Times, an additional 34,000 thousand toilets, 10,000 urinals and 15,000 bathrooms were set up to ensure an open defecation free (ODF) mela.

Earlier, on May 14, 2015, Prime Minister Narendra Modi had released a "Simhastha Declaration", a symbolic 51-point action plan churned out after at the Vichar Mahakumbh, a three-day international convention coinciding with Ujjain Simhastha.

One of the 51 nectar drops, as the action plan was termed - akin to Amrit coming out as one of the nine ratnas during the Samudra Manthan by deva (virtuous beings) and danav (evil beings) as in the original Kumbh mythological tale - was: "Strategy of a sanitation campaign should be drawn from the principles of internal purity and external cleanliness propagated by faith systems prevalent in the society concerned. Sanitation should be established as social value rather than as administered activity."

The Junaakhada and the Parmarth Niketan were trying exactly to do this - sanitation campaign drawing from the principles of internal purity and external cleanliness as propagated by the faith systems. In his valedictory address at the Vichar Mahakumbh, PM Modi had made a veiled attack on the media for reducing Simhastha as "only a photo-op to showcase Naga Sadhus to the world".

Here is an earnest thought that this Simhastha goes beyond the usual clichéd photo-ops and sends across a really effective message to make India open defecation free (ODF) country, hopefully, before the next Simhastha if not earlier.

#Swachh Bharat Abhiyan, #Simhastha Kumbh Mela
The views and opinions expressed in this article are those of the authors and do not necessarily reflect the official policy or position of DailyO.in or the India Today Group. The writers are solely responsible for any claims arising out of the contents of this article.