Swara Bhasker: 'BJP's Hindutva polarises, talks of war between Hindus-Muslims. It's getting harder for other parties to escape Hindutva'

Bollywood actor Swara Bhasker is famous for her unrelenting criticism of the powers that be. Speaking with Rohit E David, Swara talked about Hindutva, AAP, Congress, being trolled by misogynists and Bollywood.

Saturday afternoon — with temperatures soaring above 41 degrees — I found my way across the ever so big JNU campus in Delhi.

Apparently, the moment I entered JNU, the electricity exited and little did my colleague and I know, so did apparently some chances of a much anticipated interaction. Swara Bhasker's team initially said she would not be able to give us time. We stood our ground though, requesting the famous actor to come out. At 4:45 PM, Swara did come out, dressed in a green and white salwar kurta.

“You are Rohit?" she asked, with a kindly smile. Yes, I said. "Do sit inside, I’ll finish with the two other interviews and then speak with you,” she said.

As we waited, Swara’s make-up artist was speaking with her friend, “I come from Azamgarh (Uttar Pradesh) and Modi has done a lot for us. We can see work over there,” he whispered. To which, her friend replied, “Kya kaam hua hai? Yeh bolo (What work has been done? Tell us). He nodded insistently, "Kaam to hua hai’" (work has been done). 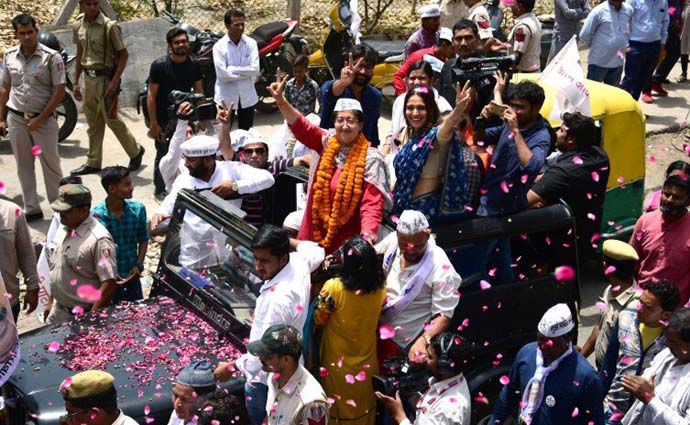 Swara has supported a wide range of people in this election, including three AAP leaders. (Source: Manish Rajput, Mail Today)

Later, Swara settled comfortably in the lawns of her parents' university house and said, “You know, I am actually not only supporting Kanhaiya Kumar but five other people — Amra Ram, CPI (M) candidate from Rajasthan’s Sikar, Digvijay Singh who is contesting from Bhopal on a Congress ticket, and three other AAP leaders in Delhi." Supporting Atishi, Dilip Pandey and Raghav Chadha, the Bollywood actor was seen doing extensive campaigning for these people through the last one week.

Swara says all the candidates she is supporting do issue-based politics — not the politics of hysteria.

Over the last few years, 'Payal', which role many people recognise her for in Tanu Weds Manu, has openly criticised the government and not shied away from venting out her dissent. “Their reign has seen a proliferation of mob violence, vigilante violence; they have created a culture where mob justice is acceptable and normalised hate violence. Their ministers have garlanded lynching accused! This is my grouse with the government — what are you doing? What is the message you are sending out? You are basically making us feel that you are a government only of those people who will carry out your agenda — even your voters are dying. A cop got lynched in Bulandshahr — what is going on?” demanded Swara.

The actress has been vocal on social media — as a result, she has often been targeted by trolls. Opening up on that, she said, “I feel that Bollywood actors like to speak their minds, Gauhar Khan is active, Kangana Ranaut is very vociferous, the same goes for Anupam Kher and Paresh Rawal is an MP. Bollywood has always had a relationship with politics. I think that people are getting more excited today,” she smiled.

A guy asks for a selfie @ airport; I oblige ‘coz I don’t discriminate people who want selfies based on their politics. He sneakily shoots a video. Tacky & underhand tactics r trademarks of bhakts. I’m unsurprised. But always glad 2 make bhakts feel like their lives are worthwhile https://t.co/bKyFEOKZQh

Why won’t the junta be on edge though, insists Swara, when a party has zeroed in on Sadhvi Pragya Thakur as a candidate?

“This government has polarised our country, community and society,” she said. When asked if the same polarisation has crept into Bollywood, raising her eyes, she said: “I don’t know... we all are very nice to each other when we meet but... I don’t think that people in the past, Bollywood actors, actually debated each other about politics on Twitter. Now, whether it is Anupam Kher sir calling out Naseruddin Shah and arguing with his comments, and Anupam sir commenting on other actors, I have also replied to him a few times — that has never happened earlier. I don’t know... I haven’t been in Bollywood for that long,” she said quietly.

Speaking on changes in Bollywood, she said, now actors are being trolled.

“Trolling is done in an organised manner. That is happening a lot,” she nodded. Swara responds strongly with, "Why are you putting this fear in my head?" when I asked her, "Do you fear you might not get work with your open opposition to the government?"

“If that is where we are headed in our country, if you are going to punish people with other political views, for speaking our minds — which is our political right — our participating in our democratic process, then we are pretty much done for. Then we all are not going to be safe. I think, when you unleash that level of violence, authoritarianism, which is fascist in nature, then everyone is done for,” she said, looking straight into my eyes. 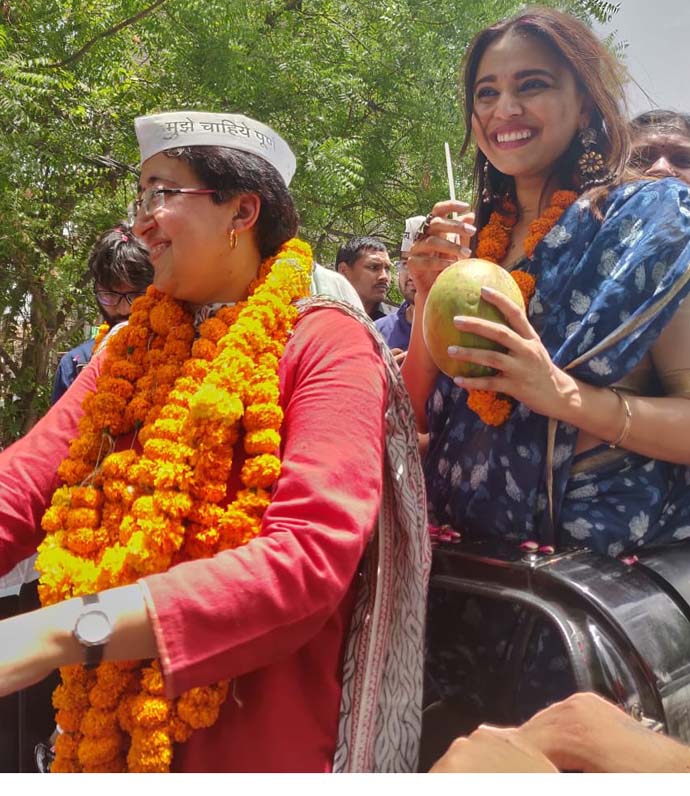 It's not all dark! Politics has its fun moments too! (Photo: Twitter)

We also spoke with Swara on AAP — the party she has campaigned for but which has been in a spot itself recently. AAP’s candidate for the East Delhi Lok Sabha seat, Atishi, is facing trouble over Marlena, her surname, while Delhi’s deputy chief minister Manish Sisodia recently warned both the BJP and Congress to beware of her, saying ‘she is a Rajputani’.

“See, the problem in our country is that you can’t escape identity. This is the unfortunate truth about our politics. Our country is so diverse that ultimately, there is no way to escape that identity, whether it is caste or religion. The BJP has framed the discourse in a way where their hate-spreading minions have unleashed the politics of placing your religion centrestage. In the scheme of things dropping the surname is less toxic than fielding a terror accused,” she said.

So, is AAP really any different from other political parties?

“I think so — the moment you start practicing electoral politics, you are going to be diluted, that’s true for everything. We can sit in our houses and be curious... the practice of daily life is about negotiation, going five steps back and three steps forward. People tell me, oh my God, why do you do commercial films, you are a thinking actress? I tell them I want the audience and the audience is with commercial films. I want to be a star," she smiled. "Of course, there are things one should not compromise on — empathy, basic human decency, values of our Constitution. Other than that, if you are doing electoral politics, you are going to be faced with compromises,” she nodded, gently this time.

With the elections on, to counter Pragya Thakur, Digvijay Singh took the help of sadhus in Bhopal and did a yagna.

“Firstly, it is not soft Hindutva — Hindutva is an ideology,” she stops as a plane goes past and the sound stops her mid-speech. “Hindutva is an ideology which basically says that India belongs only to Hindus and they are rightful citizens of India and anybody who is not a Hindu has come from outside. This basically suggests that they don’t have the same citizenship rights as Hindus, they have the conception of the real India being akhand Bharat which has Burma, Nepal, Sri Lanka and God knows what... They are also an ideology which is violent — which appeals to the tactics of the fascist, an ideology which talks about war between Hindus and Muslims, it sees Muslims as invaders. I’m quoting Savarkar when I say this — it talks about things like using rape as a strategy of war, I have got a bunch of Hindutva texts, I have been trying to read Savarkar’s Hindutva," she elaborates. 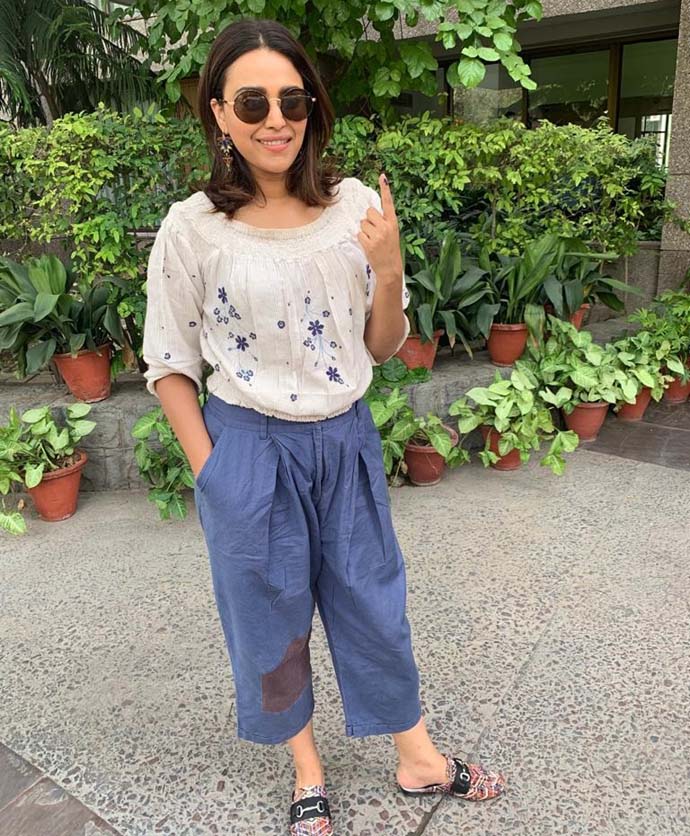 Swara Bhaskar voted in Delhi on Sunday. She clearly states the 1984 riots are one of the biggest blots on the Congress. (Photo: Author)

"Unless the Congress is agreeing to all this, I don’t think it is Hindutva politics. I think what is happening with all our politics is that Hinduism and its display is becoming quite central to our politics because the BJP has used this kind of rallying of Hindu identity with great success in 2014 — so now, other parties are thinking that, okay, now we have to rally on the same basis and that’s the chakravyuh (maze) of identity politics. It’s hard to escape it. It’s also very hard to get into it, then swing it in a liberal, progressive way — then it’s a mess, I think,” she said.

Beyond religion, have we heard of any major scam in NDA’s regime compared to UPA, keeping the Rafale discourse aside?

“UPA-2 had an absolutely shameful tenure with its relation to scams and how they handled Nirbhaya’s case — they lost the election because of that! But I don’t think the BJP government has only had Rafale. They had Vyapam, you are forgetting about the death of judge Loya, Mandsaur shooting of farmers where six died Madhya Pradesh, Nirav Modi — hello!” she said. Swara gets a bit irritated and adds, ‘I think you have framed your question wrong. Are you telling me discriminating among people on the basis of their religion is not corruption? That is what BJP is standing on,” she adds, with a strong voice.

Speaking of which, Sam Pitroda and his recent remark on the 1984 Sikh genocide shocked many. What about her?

“I think Rahul Gandhi has made a statement, it’s a ridiculous thing to say, it is shocking, shameful — the 1984 riots are one of the biggest blots on the Congress. It was a genocidal event, we should all be ashamed of it,” she said. Swara added, “Okay, I have to say this, I’m not a Congress person, I’m also not an Aam Aadmi Party worker, so you will have to direct these questions to them. I don’t know...,” she said. "All said, the BJP has received the maximum number of donations. I don’t think that BJP has any reason to complain about the privileged class. The people who have a problem with Modi are those who are sane, rational, who are not full of hate — those people belong to every class in the country,” she said.

She does not subscribe to the view of AAP and Left supporters being 'champagne socialists'.

“I don’t subscribe to right wing propaganda. I don’t subscribe to fake news — I have been a victim of them. I think anyone who is raising valid issues in the country deserves to be heard, whether they have a glass of champagne or tharra (local wine), tea, orange juice in their hands. As long as they don’t have acid in their hands to throw at my face or another woman, I think it's okay. If people are speaking about issues, we should listen to those voices,” she exclaimed.

She has been the most trolled actress, speaking boldly on Twitter.

#BJP, #Elections 2019, #Swara Bhasker
The views and opinions expressed in this article are those of the authors and do not necessarily reflect the official policy or position of DailyO.in or the India Today Group. The writers are solely responsible for any claims arising out of the contents of this article.