DailyOh! How Karachi Stock Exchange attack was being planned in April

Back in April, when the world was announcing lockdowns to fight the coronavirus, four men were caught in Karachi with detonators, hand grenades, weapons, videos, maps and communication devices.

The week in Pakistan began with the killing of 11 people in a terror attack at the Karachi Stock Exchange (KSE) in Karachi, the neighbouring country’s largest city. All four terrorists were among the 11 killed after they lobbed a grenade and stormed into the building where KSE is housed. The terrorists managed to get inside the building and began shooting. In the exchange of fire, one police personnel and four guards were killed. Two civilians were also killed by the terrorists.

The world is trying to hit the restart button and so it seems are terrorists. But the men who attacked KSE actually never hit the pause button. Even as the pandemic was raging and countries were going in for lockdowns in April, the attack on KSE was being planned. Four men were arrested in Karachi in April on charges of planning major attacks in Karachi. 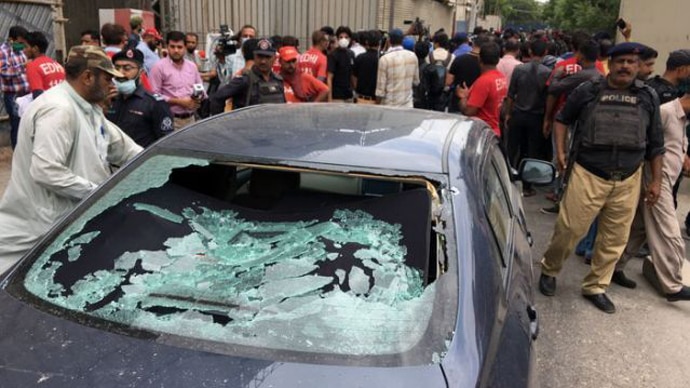 To be precise, the four were arrested on April 19. The men who were held had recently returned from Afghanistan after receiving training in carrying out attacks. They reportedly came back with explosives, detonators, hand grenades, weapons, videos, maps and communication devices. This paraphernalia was recovered from Umar, Bilal, Aamir and Waseem, the four arrested men. A day later, on April 20, Counter-Terrorism Department (CTD) in-charge Raja Umar said the four men were planning to attack KSE.

Umar, Bilal, Aamir and Waseem had created a safe house in Karachi and were waiting for the right time to attack. Before the right time could come, they were arrested. But it looks like terrorists had a Plan B and Team B ready to replace Plan A and Team A. The former were pressed into action today.

Whatever works for terrorists and terrorism in Pakistan, Pak-sponsored terror has given a tough time to India in Kashmir. But J&K police on Monday said at least one district in the region is free of terror.

Doda, they said, has flushed out all terrorists with the killing of Hizbul commander Masood alias Rahi and two other men from the outfit. Rahi lost his raah and took up arms in 2018, just months after he was accused of raping a minor in Doda. He then went missing and reappeared as a Hizbul Mujahideen operative some time later.

Terrorism runs in Rahi’s family because his brother Farooq Ahmad too is a terrorist. Ahmad has been in Pakistan since 1999. The men Pakistan has been training and harbouring have come home to roost today in Karachi.

But the man who started a separatist organisation in Kashmir Valley, whose call for shutdown had seen the entire city pull down shutters on shops, has today quit the organisation he headed. Which man? What organisation?

Syed Ali Shah Geelani and Hurriyat Conference. Geelani started his politics as a member of Jamaat-e-Islami Kashmir. Jamaat members have always been in favour of joining Pakistan. But who wants to be a member when one can be the leader! So, Geelani founded his own party Tehreek-e-Hurriyat and went on to serve as the chairman of All Parties Hurriyat Conference, a conglomerate of separatist parties.

Geelani has been blamed for the rise of militancy in Kashmir and instigating youths to indulge in stone pelting and other forms of violence. The youths were late to realise, but they did realise as one point, that while Geelani was instigating Kashmiri children to pick up arms, his own children were studying, working and living lives of luxury abroad. Now, it wasn’t just Geelani’s children, the same story was repeated with children of other Hurriyat leaders. You can read that story of hypocrisy here.

Why has Geelani resigned? He has cited the “present situation” as the reason.

“In view of the present situation, I resign from All Parties Hurriyat Conference. I have informed all the constituents of the Hurriyat about the decision," he said in his resignation audio. The resignation letter is a three-page document that goes into the details.

So what ‘situation’ is Geelani referring to – pandemic or Kashmir post abrogation of Article 370? Neither. For his resignation, Geelani has blamed constituents of Hurriyat of inaction after the scrapping of Article 370. He has also alleged corruption in Hurriyat.

Before Uttering a Single Against Geelani Sb. (HZ), Go through the letter! pic.twitter.com/vBy69BeQSQ

We however want to go into the details of what Hurriyat means because Hurriyat is our Word Of The Day. Hurriyat in Urdu means liberty, freedom and emancipation. Tehreek-e-Hurriyat meant a ‘movement for freedom’.

In 2018, Geelani quit from the post of the chairman of Tehreek-e-Hurriyat. In 2020, he has resigned as head of the Hurriyat Conference. Like, Xi Jinping is the life-long President of China, Geelani was made life-long chairman of Hurriyat.

In Arabic, Hurriyat is used as a name for boys. Perhaps, Geelani realised his idea of ‘Hurriyat’ was no longer feasible. Some say Geelani never really wanted ‘Hurriyat’ for Kashmir because his relevance lay in keeping the fight going.

The Sandesh, pronounced 'shondesh', comes laden with honey from Sundarbans. Climate change may be killing Sundarbans, but the honey from the bans can help you boost your immunity. If you are in West Bengal, don’t just rush to the sweetshop because it will take at least two months for the sweetmeat to hit the shelves in markets.

If you think the wait is too long, there is an Immunity Sandesh available. This one comes laden with Himalayan honey and more. The more includes herbs and spices such as haldi, tulsi, saffron, and cardamom.

The bad thing about these bad times is that you can’t ask someone coming from Kolkata to get you the sweetmeat. Your best option is to make it at home. You can follow this recipe and add your immunity boosters like tulsi, haldi and whatever else you think would boost your immunity. Of course, you need to replace sugar with honey.

If you want to save yourself the effort and avoid Sandesh because you are not the one who likes it anyway, you can go for kadha. But some people love Sandesh so much that in the region of Dhaka, it is called Pranahara (heart 'stealer').

It is difficult to put a date to when Sandesh was discovered, but it does find mention in 15th century Krittivasi Ramayan. Even Chaitanyacharitamrita, the epic biography of the Krishna devotee Chaitanya Mahaprabhu, mentions Sandesh as a sweetmeat.

For your taste buds, you have Sandesh. As you immunity booster, you have tulsi and the rest. A mix of the two is the recipe you should be looking at. You can replace the Sandesh with whatever you like.

So many discoveries have been made over the past few months over how you can prepare your body to deal with Covid-19, but so far no breakthrough has been made in how to prepare one’s brain for it, we mean the lack of brain.

German tennis star Alexander Zverev has been tested for the loss of common sense after being caught on camera partying, when he should have been isolating himself. Zverev was part of the Adria Tour where many tennis stars, including Novak Djokovic, were tested positive.

Zverev’s stupidity is quite unique. Last week he apologised for participating in the Adria Tour and said he will be in self-isolation and follow all the medical guidelines. But then Zverev went partying at a crowded club in Monte Carlo. We suggest an investigation be launched into the guidelines, Zverev read. You may please read Alexander Zverev as the Covidiot Of The Day.

Nobody at the club even pretended to be aware of the existence of the virus. Nobody put a mask around, even slipping it below the nose.

Sascha Zverev six days ago after Adria Tour coronavirus cluster: “I deeply apologize to anyone that I have put at risk...I will proceed to follow self-isolating guidelines...stay safe 🙏.”Sascha Zverev four hours ago: pic.twitter.com/vqBXvYdxkv

Zverev and the party animals he partied with may not realise it, but the world is a changed place and only animals are allowed to roam freely. Normalcy is nowhere near sight and idiots like Zverev are only pushing it away. Closer home, Maharashtra has extended the lockdown till July 31.

Cinema halls are one of the biggest casualties of the pandemic. Of course, OTT platforms are the biggest gainers that way. Disney+Hotstar has cracked a deal with various Hindi film producers to acquire the rights to stream some of the most anticipated movies of the year. Akshay Kumar starrer Laxmmi Bomb and Sushant Singh Rajput’s final film Dil Bechara are among the seven films that will premiere on the platform.

On the list is Mahesh Bhatt-directed Sadak 2, with Alia and Pooja Bhatt starring in it. The film will also see actor Sanjay Dutt.

Sadak 2 obviously reminds one of Sadak (1991). Remember the character of Maharani from the movie played by Sadashiv Dattaray Amrapurkar? The character was the brainchild of Sanjay Dutt reportedly.

Dutt chanced upon the idea after he saw a transperson and told Mahesh Bhatt about it. Together, the two decided a movie on such a character must be made.

Not only was the movie made, but now will have a sequel as well.

Here’s a glimpse of Maharani in Sadak.

We will leave you with this for now, but be back tomorrow.

Post your comment
#Disney+hotstar, #Karachi stock exchange attack, #Hurriyat Conference, #Syedalishahgeelani
The views and opinions expressed in this article are those of the authors and do not necessarily reflect the official policy or position of DailyO.in or the India Today Group. The writers are solely responsible for any claims arising out of the contents of this article.